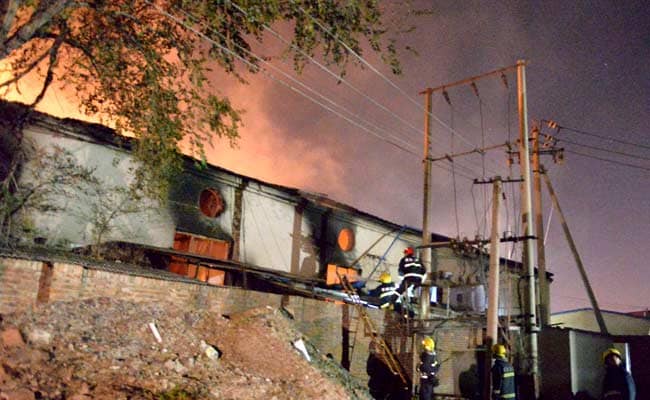 Fire and smoke rise at the site of an explosion at a warehouse in Beichen district in Tianjin. (AFP Photo)

No-one appeared to have been killed by the blast on Monday evening at a warehouse storing alcohol and other chemicals, district officials said online.

Explosions are common in China, where safety standards are often lax. At the weekend 17 people were killed in Anhui province when a gas canister blew up at a restaurant.

By the early hours of Tuesday morning the Tianjin fire had been put out and no casualties had yet been reported, officials in the city's Beichen district said on social media.

Authorities say a total of 165 people died in massive explosions at a chemical storage facility that devastated a swathe of the northern port in August.

Nearly 100 firefighters were among the dead, in China's worst industrial accident in more than a decade.

Because of its location, the latest explosion became a trending topic early Tuesday on Sina Weibo -- a microblogging service similar to Twitter -- with users posting what they said were images of the blast.

Local authorities said on Sina Weibo that the blast was caused by a company that had illegally rented a warehouse to store chemicals.

They added that air pollution measurements were within safe levels and the incident posed no risks to health.

The August explosions and their aftermath raised a host of questions in China about industrial safety, and poor firefighter training.