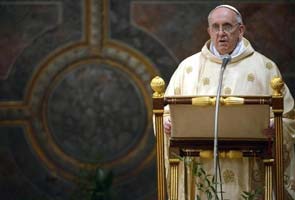 Buenos Aires,Argentina: An Argentine woman who grew up as the neighbour of the future Pope Francis says she was very briefly the object of his affections when they were both 12.

Amalia Damonte, now 76 like the pope, still lives four doors down from where Jorge Mario Bergoglio grew up in Buenos Aires.

Ms Damonte says it was clear early on that he was thinking about dedicating his life to God.

She says in a handwritten letter he left for her, the future pontiff drew a picture of a little white house with a red roof and wrote "this is what I'll buy when we marry."

Promoted
Listen to the latest songs, only on JioSaavn.com
Ms Damonte says her parents were angered by the missive and ended the friendship.