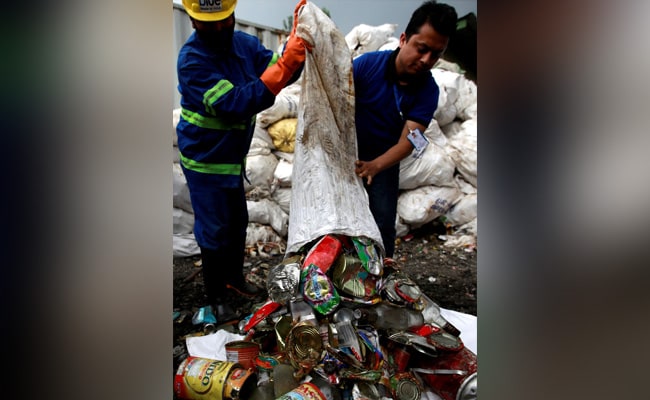 Workers from a recycling company dump garbage collected from Mount Everest out of a bag, in Kathmandu.

Trash collected from Mount Everest is set to be transformed into art and displayed in a nearby gallery, to highlight the need to save the world's tallest mountain from turning into a dumping site.

Tommy Gustafsson, project director and a co-founder of the Sagarmatha Next Centre - a visitors' information centre and waste up-cycling facility - said foreign and local artists will be engaged in creating artwork from waste materials and train locals to turn trash into treasures.

"We want to showcase how you can transform solid waste to precious pieces of art... and generate employment and income," Gustafsson told Reuters.

"We hope to change the people's perceptions about the garbage and manage it," he said.

The Centre is located at an altitude of 3,780 metres at Syangboche on the main trail to Everest base camp, two days' walk from Lukla, the gateway to the mountain.

It is due for "soft opening" to locals in the spring as the number of visitors could be limited this year due to coronavirus pandemic restrictions, Gustafsson said.

Products and artwork will be displayed to raise environmental awareness, or sold as souvenirs with the proceeds going to conservation of the region, he said.

Trash brought down from the mountain or collected from households and tea houses along the trail is handled and segregated by a local environmental group, the Sagarmatha Pollution Control Committee, but the task in a remote region that has no roads is a huge challenge.

Garbage is dumped or burned in open pits, causing air and water pollution as well as contamination of soil.

Phinjo Sherpa, of the Eco Himal group involved in the scheme, said under a "carry me back" initiative, each returning tourist and guide will be requested to take a bag containing one kilogram (2.2 pounds) of garbage back to Lukla airport, from where the trash will be airlifted to Kathmandu.

"We can manage a huge amount of garbage if we involve the visitors," Sherpa said.

Nearly 4,000 people have since made 6,553 ascents from the Nepali side of the mountain, which can also be climbed from the Tibetan side in China, according to the Himalayan Data base.