The new airport in Bhairahawa is funded by the Manila-based Asian Development Bank and OPEC Fund for International Development but built by China's Northwest Civil Aviation Airport Construction Group. 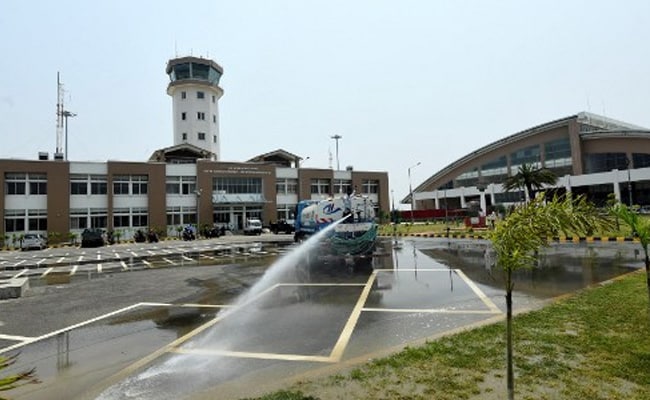 The airport is part of China's forays into infrastructure projects in the Himalayan nation.

Nepal's Prime Minister Sher Bahadur Deuba on Monday inaugurated the country's second international airport built by China that will help connect Lumbini, the birthplace of Lord Buddha and a major tourist and pilgrimage destination, to Buddhist circuits in South Asia as well as to the rest of the world.

The USD 76 million Gautam Buddha International Airport was inaugurated on the day Prime Minister Narendra Modi visited Lumbini on the occasion of Buddha Purnima and also held comprehensive talks with his Nepalese counterpart Deuba to expand bilateral cooperation in multiple areas, including in hydropower, development and connectivity between the two neighbouring countries.

Prime Minister Modi and his entourage arrived in Lumbini on a special Indian Air Force helicopter from Kushinagar, Uttar Pradesh. The IAF helicopter landed at the helipad constructed near the International Buddhist Prayer Centre and Auditorium in Lumbini.

The new airport in Bhairahawa, 19 kilometers from the UNESCO World Heritage site of Lumbini, is funded by the Manila-based Asian Development Bank and OPEC Fund for International Development but built by China's Northwest Civil Aviation Airport Construction Group. The construction of the airport is part of China's ambitious forays into mega infrastructure projects in the Himalayan nation.

The opening was marked by a successful landing of an international commercial flight, according to a press release issued by ADB Nepal office.

Addressing the inaugural ceremony, Prime Minister Deuba said the opening of the airport is an historic day in Nepal's aviation and tourism sectors and will contribute to the country's overall development and prosperity in the long run.

Speaking on the occasion, ADB Country Director for Nepal Arnaud Cauchois congratulated the Government of Nepal on the completion and opening of the airport despite the challenges posed by the pandemic.

Cauchois said the airport will form a cornerstone of the country's overall development by facilitating tourism, expanding trade and economic activities, generating local employment opportunities, and improving international air transport access to migrant workers and people living in the nearby provinces.

The new airport facility, which can accommodate wide-body airplanes, features a 15,169-square-metres terminal building and a new runway of 3,000 metres. Besides, an advanced Instrument Landing System will be used in GBIA, a first for Nepal, to allow aircraft landing even in reduced visibility.

“The opening of the airport is a moment of pride for the country. As Nepal's second international airport, it will serve as an alternate for Tribhuvan International Airport in Kathmandu, and airlines will no longer have to divert to other countries in the event of bad weather or other technical issues,” said Minister for Culture, Tourism and Civil Aviation Prem Bahadur Ale.

ADB supported the Nepal Government in upgrading and building the GBIA through the South Asia Tourism Infrastructure Development Project. The total cost of the airport construction is $76.1 million. Of this, ADB's contribution is about USD 37 million in loans and grants, while the OPEC Fund for International Development contributed about USD 11 million in loan. The rest is funded by the Government of Nepal.

During his visit to Lumbini, Prime Minister Modi along with his Nepalese counterpart Deuba laid the foundation stone for a technologically-advanced India International Centre for Buddhist Culture and Heritage in Lumbini. Once completed, the Centre will be a world-class facility welcoming pilgrims and tourists from all over the world to enjoy the essence of spiritual aspects of Buddhism, projecting India's growing soft power. PTI SBP PMS PMS PMS PMS