Nawaz Sharif and Maryam would be kept at Adiala jail for a day before being transferred to the notorious Attock Fort prison. 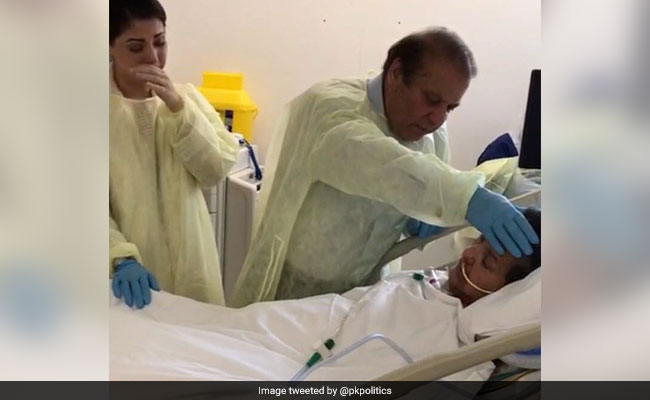 Nawaz Sharif and Maryam spent some time with Kulsoom before leaving for Pakistan.

The news was confirmed by Kulsoom's son, Hussain Nawaz.

In an emotional appeal, Hussain requested people to remember his mother in their prayers.

"She (Kulsoom) has opened her eyes after exactly one month. I don't have anything else to share. Her sedatives were being reduced. My only request is, please remember her in your prayers," he told media here.

Nawaz Sharif and his daughter, Maryam, are convicted in Avenfield reference case, will stay at the Abu Dhabi airport for seven hours and will reach Lahore at 6.15pm (2.15 UK time), sources said.

All arrangements have been made to arrest the three-time Prime Minister and his daughter by the National Accountability Bureau (NAB) team.

The father-daughter duo, who was in London to meet Nawaz's ailing wife, left for Pakistan on Friday.

According to sources, the NAB team will board the plane with the permission of authorities and will take Nawaz and Maryam under their custody.

Nawaz Sharif and Maryam would be kept at Adiala jail for a day before being transferred to the notorious Attock Fort prison.

Furthermore, the flights that were to arrive at Islamabad airport this morning have been diverted to Lahore airport.

On July 6, Nawaz was sentenced to 10 years of imprisonment, and a fine of eight million pounds was slapped on him in the Avenfield Reference case.

The case pertains to the purchase of Avenfield apartments through offshore companies, the beneficial owner of which was Maryam.

Maryam was sentenced to seven years of jail and fined two million pounds by the Accountability Court.

Earlier in April, Pakistan's Supreme Court disqualified Nawaz from contesting elections for the rest of his life because of his corruption cases as revealed in the Panama Papers.