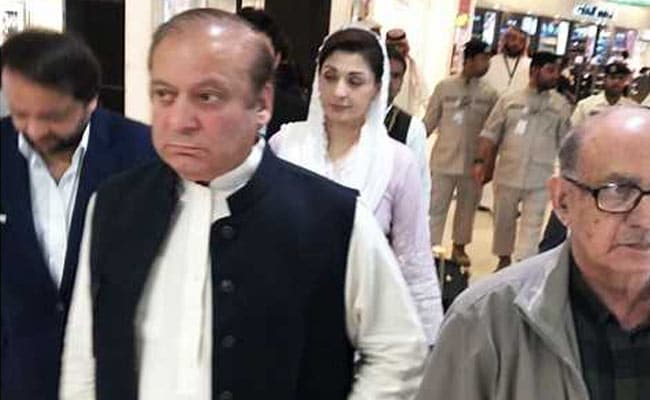 Nawaz Sharif has been sentenced to 10 years in prison (File)

Pakistan's jailed former prime minister Nawaz Sharif has been kept in "abysmal conditions" and deprived of a newspaper and bed and uses a "dirty" washroom in the high-security Adiala prison in Rawalpindi, according to a letter written by his brother Shahbaz Sharif.

The letter was written by Mr Shahbaz to caretaker chief minister of Punjab Hasan Askari Rizvi.

It came after Mr Shahbaz, Mr Sharif's younger brother and former chief minister of the province, visited Mr Sharif with his family on Saturday.

"I want to draw your attention to the abysmal conditions under which Mian Muhammad Nawaz Sharif, former Prime Minister of Pakistan, is languishing in the high-security Adiala Jail in Rawalpindi," he wrote.

Mr Sharif, 68, and his daughter Maryam, 44, were arrested in Lahore on July 13 on their arrival from London after an accountability court found them guilty over his family's ownership of four luxury flats in London. They were later taken to Adiala Jail in Rawalpindi.

Mr Shahbaz, who is also president of Pakistan Muslims League-Nawaz, went on to highlight the conditions faced by the former prime minister in jail.

"It was noted during my visit that Mian Muhammad Nawaz Sharif was not even given a newspaper to read, his mattress was on the floor and the washroom at his disposal was in a dirty despicable condition, with no air conditioner in his room," the letter said.

Mr Shahbaz complained that no attendant was provided and medical facility was also not up to the mark to take care of Mr Sharif who is a heart and diabetic patient.

He said Mr Sharif needed medicine on time and frequent visits of a doctor and requested that his personal doctor, who knows his medical condition, be allowed to visit him twice a day to administer medicine and examine a clean diet.

"It is very unfortunate that Mian Muhammad Nawaz Sharif, three time Prime Minister of Pakistan, is being treated in such a shabby manner. This situation is unacceptable given the minimum facilities he is entitled to as former Prime Minister," he wrote.

Earlier, it was said by the jail authorities that Mr Sharif was given B-class facilities which entitled him to have an attendant and facilities like bed, TV, air conditioner, newspaper and home cooked food at his own cost.

Both Mr Sharif and Ms Maryam have been sentenced by an accountability court to 10 and 7 years in prison respectively for corruption charges linked to Panama Papers scandal.

Mr Sharif was disqualified by the Supreme Court last year in the Panama Papers case.

Mr Sharif has been one of the country's leading politicians for most of the past 30 years. He remains popular, especially in Punjab, the most populous and electorally significant province.