"Time To Peer Into The Universe": NASA's Stunning Image Of Galaxy Cluster 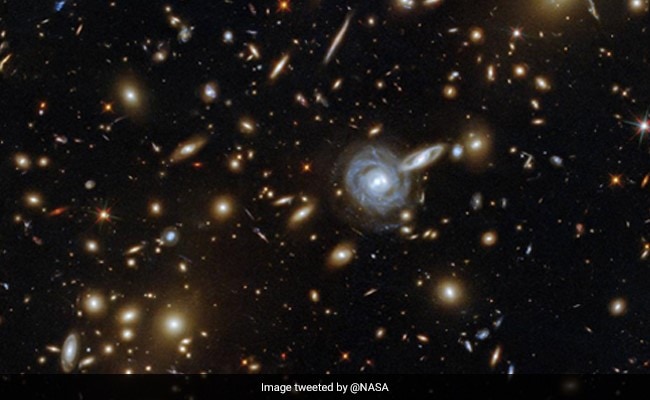 US space agency NASA shared a stunning glimpse of a galaxy cluster as it posted an image by its Hubble Telescope. The image features the galaxy cluster ACO S 295, which is 3.5 billion light-years away from the Earth

"It's time to peer into the universe...  This @NASAHubble. image is swarming with galaxies housing an abundance of new worlds!," NASA wrote in a tweet.

In a statement, the US space agency further elaborated about galaxy cluster: "This packed image taken with the NASA/ESA Hubble Space Telescope showcases the galaxy cluster ACO S 295, as well as a jostling crowd of background galaxies and foreground stars. Galaxies of all shapes and sizes populate this image, ranging from stately spirals to fuzzy ellipticals. This galactic menagerie boasts a range of orientations and sizes, with spiral galaxies such as the one at the center of this image appearing almost face on, and some edge-on spiral galaxies visible only as thin slivers of light."

This @NASAHubble image is swarming with galaxies housing an abundance of new worlds!

Let your mind wander... And get to know more about this galaxy cluster: https://t.co/ZXcwkYNOeppic.twitter.com/a2KBakb1sg

Reacting to the photograph, a Twitter user, @BarbG48583938, said, "I get chills looking at images like these. How insignificant are we?

I get chills looking at images like these... how insignificant are we?????

“This is breath-taking and doesn't even seem possible," wrote another user, @thefastmall.

This is breathtaking and doesn't even seem possible.

Another user said the picture was "incredible" and there was no doubt that the universe was infinite.

Incredible! Is there any doubt that the universe is an infinite expanse?

How many civilisations or galactic empires, if any, are in this shot. It's all just a little mind boggling to be honest

The universe and its galaxies are amazing.

To be born is to receive the entire universe as a gift, a pity that humanity is wasting its finite and insignificant time blaming itself for existing

When I was born we learned about planets, galaxies, nebulas, etc. but I never thought I'd be able to actually see them. Thank you NASA.

Space is big. Really big. You just won't believe how vastly hugely mind-bogglingly big it is. I mean, you may think it's a long way down the road to the chemist, but that's just peanuts to space

The galaxy cluster dominates "the center of this image, both visually and physically," the  US space agency said in its note.

"The cluster's huge mass has gravitationally lensed the light from background galaxies, distorting and smearing their shapes. In addition to providing astronomers with a natural magnifying glass with which to study distant galaxies, gravitational lensing has subtly framed the center of this image, producing a visually striking scene," the statement read.

The Hubble Space Telescope, a large space-based observatory, was launched and deployed by space shuttle Discovery in 1990. It has since then revolutionised astronomy. Scientists have used Hubble to observe some of the most distant stars and galaxies as well as the planets in the solar system.

Over the last 30 years of its operation, its capabilities have grown after new cutting-edge scientific instruments were added to the telescope throughout five astronaut servicing missions, which have greatly enhanced the telescope's lifetime.

The telescope has made over 1.4 million observations in its lifetime, the agency says on its website, adding that over 18,000 peer-reviewed science papers had been published on its discoveries.