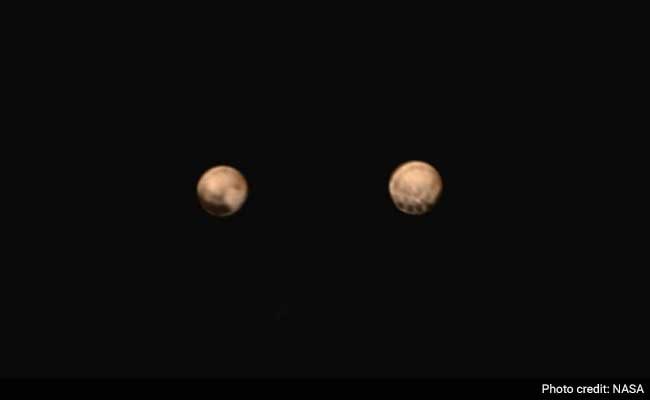 Miami, Florida: There's a near-perfect heart shape on Pluto's rusty red surface. The dwarf planet is dotted with bright points which may be ice caps, and a mysterious dark shape nicknamed "The Whale."

Scientists are seeing all this for the first time as a piano-sized NASA spacecraft, called New Horizons, hurtles toward the distant celestial body on its way toward a historic flyby on July 14.

"We're at the 'man in the moon' stage of viewing Pluto," said John Spencer of the Southwest Research Institute in Boulder, Colorado.

"It's easy to imagine you're seeing familiar shapes in this bizarre collection of light and dark features. However, it's too early to know what these features really are."

But scientists expect those mysteries to be solved in coming days as the spacecraft closes in on Pluto, once considered the farthest planet in the solar system before it was reclassified as a dwarf planet in 2006.

That same year, the New Horizons mission launched from Cape Canaveral, Florida on a journey of nearly 10 years and three billion miles, becoming the first spacecraft to explore this far-away frontier.

"We are coming up on the culmination of all this effort, all this planning," said Joe Peterson, a science operations leader for the New Horizons mission.

"Very soon we are going to go by Pluto and get the actual goods."

The $700 million unmanned spacecraft has seven sophisticated science instruments and cameras that are collecting data daily and sending it back to Earth.

"The instruments on New Horizons were all designed to work together to give us a comprehensive picture of the Pluto system," said Cathy Olkin, deputy project scientist for New Horizons.

Together they will help scientists study Pluto's geology, surface composition, temperature and atmosphere -- as well as its five moons.

Blurry, pixellated color images began arriving in April and May, when the spacecraft was about 50 million miles (80 million kilometers) away from its destination.

After a brief system failure caused the spacecraft to go into safe mode on July 4, the best image yet was taken on July 7 when New Horizons was just under five million miles (eight million kilometers) from Pluto.

The image shows a light-colored heart shape some 1,200 miles (2,000 kilometers) across, and a darker, whale-like shadow at its side.

"I love this one," said Olkin, indicating that the shape could be due to ice.

"We know that there are ices on Pluto, and we expect those ices to be brighter."

More data in the coming days should reveal more clues about the composition of Pluto's surface, as well as its Texas-sized moon, Charon.

"The next time we see this part of Pluto at closest approach, a portion of this region will be imaged at about 500 times better resolution," said Jeff Moore, geology, geophysics and imaging Team Leader of NASA's Ames Research Center.

The best views are expected Monday through Thursday of next week, said principal investigator Alan Stern.

Even after the spacecraft whizzes by, the data and pictures will keep coming in for another 16 months, Stern told NPR's Science Friday.

"This is the gift that keeps on giving," he said.

New Horizons has enough power to continue traveling for 20 years, but will never catch up with NASA's Voyager 1, which launched in 1977 and is the most distant man-made object in space, Stern said.

In 2013, Voyager 1 entered interstellar space, some 12 billion miles (19 billion kilometers) from the Sun.