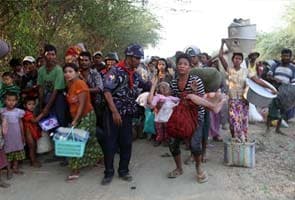 Meikhtila: Myanmar's army took control of a ruined central city on Saturday that was placed under martial law after several days of clashes between Buddhists and Muslims killed dozens of people and left scores of buildings in flames in the worst sectarian bloodshed to hit the Southeast Asian nation this year.

Truckloads of soldiers could be seen patrolling Meikhtila and taking up positions at intersections and banks as some residents, who had cowered in their homes for days since the mayhem began Wednesday, began wandering their streets to take in the destruction.

President Thein Sein imposed a state of emergency in the region on Friday in a bid to stop the violence from spreading. The unrest, the first of its kind reported in Myanmar since a wave bloodshed shook western Rakhine state twice last year, underscored the government's failure to reign in anti-Muslim sentiment in the predominantly Buddhist country, where even leading monks have staged anti-Muslim rallies that critics say have set the stage for further violence.

It was not immediately clear which side bore the brunt of the latest unrest, but terrified Muslims, who make about 30 percent of Meikhtila's 100,000 inhabitants, stayed off the streets Friday as their shops and homes burned and some angry Buddhist residents and monks tried to stop firefighters from dousing the blazes. Riot police crisscrossed town seizing machetes and hammers from enraged Buddhist mobs.

At least five mosques were torched and thousands of terrified Muslims have fled their homes, escorted to safety by police to two make-shift camps. Some Buddhists, meanwhile, have sought shelter at local monasteries.

"Calm has been restored after troops have taken charge of security, said Win Htein, an opposition lawmaker from Meikhtila. "So far, nearly 6,000 Muslim people have been relocated at a stadium and a police station for their safety."

Little appeared to be left of some palm tree-lined neighborhoods, where whole plots were reduced to smoldering masses of twisted debris and ash. Broken glass, destroyed motorcycles and overturned tables littered roads beside rows of burnt-out homes and shops, evidence of the widespread chaos of the last two days.

The government's struggle to contain the violence is proving another major challenge Sein's reformist administration as it attempts to chart a path to democracy after nearly half a century of military rule that once crushed all dissent.

Thein Sein took office two years ago this month, and despite ushering in an era of reform, he has faced not only violence in Rakhine state, but an upsurge in fighting with ethnic Kachin rebels in the north and major protests at a northern copper mine where angry residents - emboldened by promises of freedom of expression - have come out to denounce land grabbing.

The devastation in Meikhtila was reminiscent of strikingly similar scenes last year in western Myanmar, where sectarian violence between ethnic Rakhine Buddhists and Muslim Rohingya left hundreds of people dead. More than 100,000 people are still displaced from that conflict, almost all of them Muslim.

The troubles in Meikhtila began Wednesday after an argument broke out between a Muslim gold shop owner and his Buddhist customers. A Buddhist monk was among the first killed, inflaming tensions that led a Buddhist mob to rampage through a Muslim neighborhood.

By Friday, clashes had ceased, but buildings still smoldered and the city remained tense as police seized knives, swords, hammers and sticks from young men in the streets and detaining scores of looters.

Monks accosted and threatened journalists trying to cover the unrest, at one point trying to drag a group of several out of a van. One monk, whose faced was covered, shoved a foot-long dagger at the neck of an Associated Press photographer and demanded his camera. The photographer defused the situation by handing over his camera's memory card. The group of nine journalists took refuge in a monastery and stayed there until a police unit was able to escort them to safety.

San Htwe, a 39-year-old housewife, said on Saturday that she could see police and soldiers "everywhere," but: "I don't feel at ease because I'm afraid that the situation will be like in Rakhine" - where Buddhist and Muslims communities live in near-total segregation.

She said her 8-year old son was already traumatized by the riots, and could barely eat. "Whenever he hears shouting, he says, in panic: 'Mom, let's run! The kalar are coming." Kalar is a derogatory word for Muslims.

"I think most children here have experienced trauma," she said. "I worry that it will remain in their minds forever."
There were indications on Friday that the violence had already spread to at least one village on the outskirts of Meikhtila, about 550 kilometers (340 miles) north of the main city of Yangon.

Local activist Myint Myint Aye said fires were burning in the nearby village of Chan Aye, where shops were looted but calm was restored later in the day.

"We welcome and encourage the efforts of government authorities, community leaders, civil society and political party leaders to restore calm, to foster dialogue and increase tolerance in a manner that respects human rights and due process of law," Nuland told a news briefing.

Occasional isolated violence involving Myanmar's majority Buddhist and minority Muslim communities has occurred for decades, even under the authoritarian military governments that ruled Myanmar from 1962 until 2011.

Promoted
Listen to the latest songs, only on JioSaavn.com
But since an elected, though still military-backed, government took power two years ago, people have been using the Internet and social media in increasing numbers, and the press has been unshackled, with censorship mostly dropped and privately owned daily newspapers expected to hit the streets in the next few months.