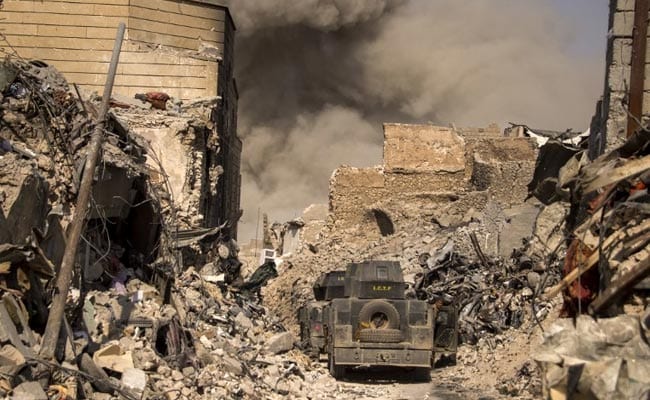 Clouds of smoke rose above Old City as air strikes hit down, crackle of gunfire echoing through streets.

Mosul, Iraq: Once the beating heart of Iraq's second-largest metropolis, the Old City of Mosul is now a broken wreck, its winding streets piled high with rubble and hardly a building spared from destruction.

After months of gruelling battles to retake Mosul from the ISIS group, the Old City has become a bleak landscape of gutted buildings, crumbling concrete and the pockmarked mosque domes.

Prime Minister Haider al-Abadi declared Mosul finally retaken on Monday, as his forces fought to recapture a last sliver of territory still held by the jihadists in the Old City on the west bank of the Tigris River.

But the cost of that victory has reduced a once-thriving urban hub to a grey wasteland.

Residential low-rises that once housed families and shops have been flattened or blasted into empty shells.

Burned-out cars sat on top of each other in craters, as armoured cars, mechanical diggers and ambulances jostled for space on the narrow streets.

The bodies of dead jihadists lay on the road, covered by blankets.

In some buildings, remnants of life remained, once-private domestic scenes exposed when walls were torn away.

A room seems to float above the ruins, a clock hanging from the wall and an indoor plant sitting in a corner. Iron cooking pots and electric kettles sat amid the rubble.

'The battle is over'

On Monday, fighters with Iraq's elite Counter-Terrorism Service were battling to dislodge the last jihadist holdouts from a handful of buildings in the Old City.

Clouds of smoke rose above the city as air strikes hit down, the crackle of gunfire echoing through the streets.

"In reality, the battle is already over," Colonel Salam Jassem Hussein told AFP. "There are only a few groups of terrorists left."

Draining cans of Red Bull, Hussein oversaw the fighting with his arm in a sling after he was wounded in combat. On his neck a bandage used to hide another wound kept coming unstuck in the stifling heat.

Fighters climbed abandoned buildings at his command, taking up positions with sniper rifles and machineguns.

Promoted
Listen to the latest songs, only on JioSaavn.com
In the courtyard of the ancient Nuri mosque, the venerable building blown up by IS as Iraqi forces advanced, the air filled with an appetising smell as volunteers prepared skewers of meat for Iraqi forces.

They worked just a few steps from where Mosul's iconic leaning minaret -- also destroyed by IS -- once rose over the Old City and a few ancient columns still stood, decorated in calligraphy citing verses of the Koran.