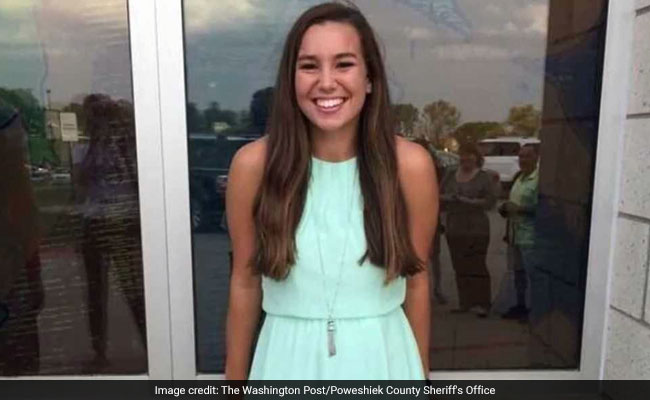 Mollie Tibbetts, 20, was found dead about a month after she went missing in Brooklyn

Far from the courtrooms where President Donald Trump was battered this week by bad news, a slaying in small-town Iowa has given him ammunition to defend some of his most raw statements about illegal immigration.

A college student was found dead. A 24-year-old Mexican national is charged with murder.

The slaying of Mollie Tibbetts and the arrest of this week of farmworker Cristhian Rivera pulled attention away from the convictions of the president's former campaign chairman and personal attorney while providing an example of the kind of criminal fears that fueled Trump's rise to the White House.

Investigators have not said how Tibbetts was killed or what happened in the moments after she disappeared July 18 while jogging. But after confessing to her killing Monday, Rivera led police this week to her body in a field.

Tibbetts, 20, was a psychology student at the University of Iowa, and her disappearance sparked a month-long search.

Administration officials and Republican lawmakers have seized upon the case to rally support ahead of the November midterms while warning that a loss of congressional majorities would expose the president to possible impeachment. Trump has told supporters that Democrats represent "open borders" that would invite a flood of dangerous illegal immigration.

"Sadly, the individual believed to be responsible for the murder is an illegal immigrant," Sanders said, "making this an unfortunate reminder of why we need to strengthen our broken immigration laws."

Fox News led its website with a package on the case headlined, "Monster Down the Road," and Vice President Mike Pence and former Trump campaign aide Corey Lewandowski drew attention to her death on Twitter. "We MUST stop illegals from coming to our country and killing innocent people - this is non negotiable," Lewandowski wrote.

"It gets to the basic point Republicans have been making" that the immigration system needs to get stricter, Wilson said. "Immigration as an issue is a winner for Republicans when we make it about security and crime."

Immigrants do not commit violent crimes at a higher rate than native-born Americans, according to federal and state crime statistics. A study published in February by the libertarian Cato Institute examining 2015 criminal data in Texas found native-born residents were much more likely to be convicted of a crime than immigrants in the country legally or illegally.

Investigators have not found anything indicating that Tibbetts and Rivera knew one another before the attack, Mitch Mortvedt, assistant director of Iowa's Division of Criminal Investigation, said in an interview Wednesday.

The area where Tibbetts went running is a narrow farm road leading out of town, Mortvedt said, and investigators are looking at whether her killer noticed her by chance or had seen her there on previous occasions. "It's not like a jogging path with benches or picnic tables. It's a city street that turns into county road, with corn fields on both sides," he said. "She was just running on the side of the road."

Rivera was taken into custody after agreeing to an interview with investigators, according to Mortvedt, who said state officials have been assisted by the FBI and U.S. Immigration and Customs Enforcement's Homeland Security Investigations division. Rivera is charged with first-degree murder, and a judge Wednesday set his bail at $5 million.

Rivera was in the country illegally and used a stolen identification to satisfy a federal background check at the farm where he worked, according to law enforcement officials and statements Wednesday by his former employer.

During a news conference Wednesday, Yarrabee Farms manager Dane Lang said Rivera provided a state-issued photo identification and a Social Security card when he applied for a job nearly four years ago.

But those documents were false, Lang said.

He said Yarrabee Farms did not use the government's E-Verify system to vet Rivera. Instead, the farm used a program connected to a Social Security Administration database, which didn't flag any problems.

Lang would not disclose the name that Rivera used to get a job.

"He came to work every day, was on time and got along with his co-workers," Lang said. "All of us are saddened by the tragic death of Mollie and the realization that one of our co-workers was involved.

"This is tragic. Mollie's death is tragic. Everyone in our community wishes this didn't happen. I believe we complied. I know we complied with the full extent of the law when we filled out the I-9," he added, referring to federal employment paperwork.

"This guy stayed around for 35 days after he did this," he said. "Nobody noticed a difference."

In a motion asking for a gag order, Rivera's attorney, Allan M. Richards, claimed Wednesday that Rivera was in the country legally, saying that his employer had verified Rivera's status. Richards provided no evidence to back up his assertion in the motion and could not immediately be reached for comment.

In statements to investigators, Rivera said he spotted Tibbetts jogging and drove past her several times. The Chevrolet Malibu he was driving appeared in and out of surveillance footage from a camera aimed at the street.

"It seemed that he followed her and seemed to be drawn to her on that particular day," Iowa Division of Criminal Investigation Agent Rick Rahn told reporters. "And for whatever reason, he chose to abduct her."

What happened next, Rivera told authorities, is blocked from his memory, something he said happens when he gets upset or angry. The next thing he recalled, he told investigators, was being inside the car and finding a headphone earpiece in his lap that did not belong to him. That prompted him to open the trunk, where he saw Tibbetts bleeding from the head.

Rivera told authorities he carried Tibbetts' body into an isolated cornfield, where he covered her with stalks and walked away.

A U.S. Immigration and Customs Enforcement representative said that the agency lodged an immigration detainer on Rivera after his arrest, so if he is ever released, he would be deported to Mexico.

Within hours of the news conference announcing Rivera's arrest, Trump weighed in on the killing.

"You saw what happened to that incredible, beautiful woman (Mollie Tibbetts)," he said at a rally in West Virginia. "Should have never happened. ... The immigration laws are such a disgrace. We're getting them changed."

As lawmakers publicly debated what Tibbetts' death said about the nation's immigration system, her family, which had been vocal during the search for the college student, released a statement asking to be "allowed the time to process our devastating loss and share our grief in private."

(Except for the headline, this story has not been edited by NDTV staff and is published from a syndicated feed.)
Comments
Mollie Tibbettscollege student