US Mid-Term Elections: With power expected to be split across the two parties, Washington is entering a period of policy-making gridlock. Republicans will likely take at least the House, but by a much smaller margin. (Representational)

It was an election packed with surprises.

Republicans were counting on resounding wins in the House and Senate because of voters listing stubborn inflation and a looming recession at the top of their concerns.

Instead, as the night unfolded, President Joe Biden's party proved to be far more resilient than even the Democrats had reason to hope, as issues such as abortion rights and a general distaste for more extremist candidates playing a big part.

With power expected to be split across the two parties, Washington is entering a period of policy-making gridlock. Republicans will likely take at least the House, but by a much smaller margin that expected, while Democrats have a clear path to keeping control of the Senate.

Here are the key takeaways.

Democrats staved off the complete shellacking that some polls had projected as a possibility leading into Tuesday. "It's definitely not a Republican wave -- that's for darn sure," GOP Senator Lindsey Graham said on NBC late Tuesday.

A smaller Republican House majority spells a tough couple of years for Kevin McCarthy if be becomes the next House Speaker. He will have to navigate a fractious and sometimes irreverent caucus that is eager to wield the power of the majority and has little appetite to compromise with Biden.

A stronger-than-anticipated night for Democrats also gives them more leverage going into the last two years of the current administration. The so-called lame-duck session is when the two parties try to cut deals on a wide range of policy issues, including the child-tax credit, energy permitting, business tax cuts and potentially the debt limit, preventing Republicans from bumping up dangerously close to economic default next year.

The result of a key governor race offers clues to what the campaign for president in 2024 will look like.

Former President Donald Trump wanted to solidify his grip on the Republican party, betting that the candidates he had personally endorsed (and backed his unfounded claim that the 2020 election was stolen from him) would do well and make him the undisputed nominee for 2024.

But two things got in the way. One, several of these so-called election deniers fared poorly. In one of the hardest-fought contests in the Senate, Democrat John Fetterman defeated celebrity doctor Mehmet Oz (backed by Trump) in Pennsylvania.

Two, Ron DeSantis won a second term as Florida governor by a landslide. That paves the way for him to challenge Trump for the candidacy. Indeed, that wry smile in response to the "two more years" chants at his campaign event spoke volumes.

Trump recognized the threat and has launched a warning shot to his rival: "If he runs, he could hurt himself very badly," Trump said in an interview Monday with Fox News and other outlets. "I would tell you things about him that won't be very flattering."

Voters in both parties seemed clear-eyed about the impact of inflation on the economy. It was the top issue in exit polls, with 79% saying it had caused a hardship for their family, according to network exit polls. One in five said it was a severe hardship.

Inflation -- which, along with the economy in general, regularly tops the lists of voter concerns -- is the highest in a generation, eating into paychecks. And yet many of those voters didn't seem to hold Biden or the Democrats responsible: 42% said they still trusted the Democratic party to handle the issue better.

Republicans and Democrats have each painted dramatically different pictures of the economy's health. The GOP put the soaring cost of living at the center of their campaigns, blaming Biden and his party. Meanwhile Biden and his party have focused on an unemployment figure that is at its lowest in decades and an ongoing hiring boom that has kept-up consumer spending.

For markets, a divided government has traditionally proved a boon because it blocks any major legislation that risks roiling the outlook for the economy. Investors have already been crushed this year by the Federal Reserve's campaign to curb inflation. Gridlock that hobbles Democrats' ability to pass major fiscal measures would remove one potential reason for Fed Chair Jerome Powell to raise interest rates even further.

Republicans Win on Economy While Democrats Lean on Abortion | The nearly half of voters who identified the economy as the most important issue selected Republican candidates two-to-one. 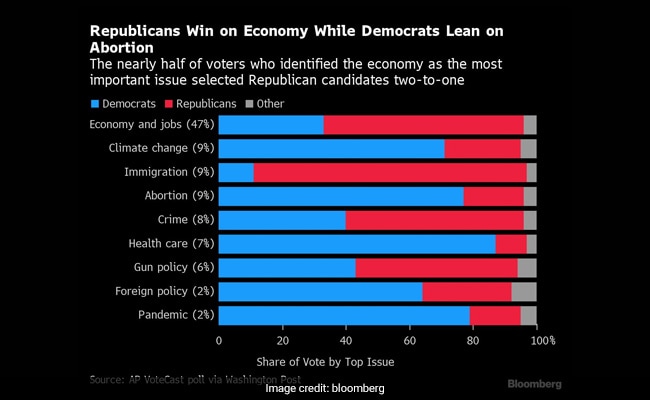 Abortion rights were on the mind of many voters, particularly women. People from Michigan to California overwhelmingly voiced their support for abortion rights at the state level after the Supreme Court's Dobbs decision to roll back federal protections.

Heather Bastian, a 42 year-old living in Garrison, New York, said her number one issue is abortion. "I do not want our state government to slip into controlling my body," she said.

Michigan and California will now amend their constitutions to add the right to choose to have an abortion and use contraceptives. In Vermont, voters added an even broader right to "personal reproductive autonomy."

The success of the state-level abortion protections demonstrate the widespread disconnect between the public and the Supreme Court, which erased 50 years of precedent in its June decision to leave abortion rights decisions to the states. The support for these ballot measures in a wide variety of states is likely to spur similar efforts in coming years in additional jurisdictions.