In Video, NBA Player Groaned As US Cop Tased Him Over Parking Violation

Milwaukee Police Chief Alfonso Morales said in a brief statement that officers had been disciplined for acting "inappropriately" when they "decentralized, tased and arrested" Brown. 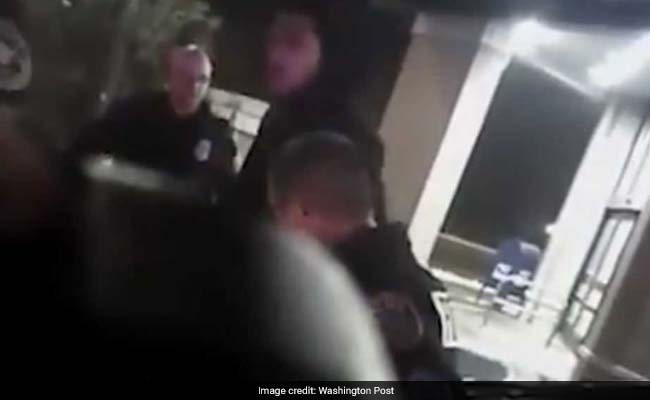 The body-camera footage shows an officer asking Sterling Brown to show his license.

Moments after police body-camera video of his arrest was released Wednesday, Milwaukee Bucks rookie Sterling Brown said his experience with the city's police department was "wrong and shouldn't happen to anybody" and went on to criticize officers sharply for "a simple parking ticket" that turned into "an attempt at police intimidation, followed by the unlawful use of physical force."

Milwaukee Police Chief Alfonso Morales said in a brief statement that officers had been disciplined for acting "inappropriately" when they "decentralized, tased and arrested" Brown.

The city had been bracing for release of the video, which Mayor Tom Barrett had warned was "disconcerting" and "disturbing." Brown, 23, was tased during a routine parking violation in January and reportedly plans to file a civil rights lawsuit over the episode.

The 6-foot-6 shooting guard was arrested around 2 a.m. on Jan. 26, when an officer doing a business check at a Walgreens spotted a vehicle parked across two parking spots reserved for disabled drivers, Milwaukee police Sgt. Timothy Gauerke told the Journal Sentinel. Brown was initially arrested on a possible misdemeanor charge of resisting or obstructing an officer, but police officials did not refer the case to prosecutors after an internal review that included viewing the body camera footage. A police spokesman told the Journal Sentinel at the time that Brown, then 22, had been cited for a parking violation. Speaking with reporters before the Bucks' game later that day, Brown's face appeared bruised and scratched, according to the paper, with Brown calling it "a personal issue."

The body-camera footage shows an officer asking Brown, who is outside the store, to show his license; he then is taken to the ground by several officers and groans as one tases him.

On Wednesday evening, Brown wrote in full on Twitter:

"My experience in January with the Milwaukee Police Department was wrong and shouldn't happen to anybody. What should have been a simple parking ticket turned into an attempt at police intimidation, followed by the unlawful use of physical force, including being handcuffed and tased, and then unlawfully booked. This experience with the Milwaukee Police Department has forced me to stand up and tell my story so that I can help prevent these injustices from happening in the future.

"Situations like mine and worse happen every day in the black community. Being a voice and a face for people who won't be heard and don't have the same platform as I have is a responsibility I take seriously. I am speaking for Dontre Hamilton of Milwaukee, Laquan McDonald of Chicago, Stephon Clark of Sacramento, Eric Garner of New York, and the list goes on. These people aren't able to speak anymore because of unjust actions by those who are supposed to "serve and protect" the people.

"The common denominator in all of these situations has been racism towards the minority community, the abuse of power, and the lack of accountability for officers involved. The lack of repercussions for the police officers involved in so many of these cases is offensive. This is a slap in the face to the victims' families and communities.

"Black men shouldn't have to have their guard up and instantly be on the defensive when seeing a police officer, but it's our reality and a real problem. There must be mutual respect and both sides have to figure out how to accomplish this.

"There are no easy solutions to this problem, but there are strides that can be made to create change. I will do my part in helping to prevent similar incidents from happening to the minority community in the future.

"This is bigger than me. My family, friends, legal team, Priority Sports, Milwaukee Bucks, the black community and the communities of all who stand against injustice plan to continue the fight. Peaceful support to ensure no further damage to our community is the only way to respond. I know many of you will share my anger and frustration, but for our community to progress and grow, we need to build on what we already have and not destroy it. I will take legal action against the Milwaukee Police Department to continue forcing change in our community."

Reaction in one Milwaukee bar was muted as patrons watched the footage.

"It's pretty typical of the police community relations in Milwaukee and nationwide," said 37-year-old Jamaal Smith, a racial justice community engagement manager for the YWCA of Southeast Wisconsin. "We're talking about the most segregated metropolitan area in the country."

Smith was watching along with other patrons in a bar and he added: "It does nothing but exacerbate the tension in police community relations. It took six officers to address a parking violation? Come on! It was absolutely unnecessary and unwarranted and ridiculous."

A man next to him at the bar was watching the video on his phone.

"We have legitimate fears, too," said the man, who gave his name only as Paul and said he is a former police officer in Milwaukee. He said the black community sometimes overreacts to viral videos such as this, noting that in perhaps 20 percent of such incidents he sides with the police, noting context and circumstances. "But this instance is totally wrong," he said.

The Bucks called Brown's experience "shameful and inexcusable" and issued a plea for greater accountability in a statement:

"The abuse and intimidation that Sterling experienced at the hands of Milwaukee Police was shameful and inexcusable. Sterling has our full support as he shares his story and takes action to provide accountability.

"Unfortunately, this isn't an isolated case. It shouldn't require an incident involving a professional athlete to draw attention to the fact that vulnerable people in our communities have experienced similar, and even worse, treatment.

"We are grateful for the service of many good police officers that courageously protect us, our fans and our city, but racial biases and abuses of power must not be ignored.

"There needs to be more accountability.

"The Milwaukee Police Department and local officials have acknowledged the challenges they are working to address, and we urge them to enact higher standards and more direct accountability. We all want to be able to trust each and every officer serving to protect us.

"Incidents like this remind us of the injustices that persist. As an organization, we will support Sterling and build on our work with local leaders and organizations to foster safe neighborhoods and better our community."

In the days leading up to its release, Barrett and Morales had warned residents about the video.

"It was a disturbing video when I saw it, and I know that the police chief feels the same way," Barrett told the Milwaukee Journal Sentinel on Tuesday. "And I don't know exactly what actions [the police] department is going to take, but it is disconcerting to see some of the actions in that video."

The Milwaukee police released a "Message to the Community" video Tuesday, showcasing the department's work in the community.

"In those instances where we have made mistakes and are wrong, I'm sorry," Morales, who took over the department in February, said in that video. He went on to say that he would "defend our officers when they are right and will admit when members of our organization are wrong. So if there's ever an incident where one of our members makes a mistake, unnecessarily escalating a situation, I'm going to be honest and transparent about it."

The mayor said that promotional video's release was not related to the Brown case. But speaking at a Milwaukee church during the city's Ceasefire Sabbath on Sunday, assistant police chief Michael Brunson Sr. addressed the Brown video.

"There's going to be a video that's going to come out soon, in the next couple of weeks, involving the department, and I'm going to honest with you, we're going to need your support during the challenges," he said, according to a video published by WITI-TV.

The police report from the incident said that Brown refused to step back from an officer who saw a vehicle parked across the handicapped spots, and "became very aggressive." Brown "physically resisted officers attempts to handcuff him and he was taken to the ground in a controlled manner," the police reports said, according to WISN. A stun gun was eventually used "to get Brown in control with handcuffs," according to the report. Then-police chief Ed Flynn told WISN that the subsequent investigation was meant to "ascertain how a parking ticket turned into a tasing, and so that's what we're going to do."

The headlines over the incident came a little over a year after Bucks President Peter Feigin called Milwaukee a "segregated, racist place."

Promoted
Listen to the latest songs, only on JioSaavn.com
Brown, who turned 23 in February, hails from the Chicago suburb of Maywood, Illinois, and attended Proviso East High. He chose to attend SMU to play for Larry Brown, and he was the 46th player taken in last summer's NBA draft, going to the Philadelphia 76ers in the second round. The Sixers then traded his rights to the Bucks in early July. He appeared in 54 games, averaging 4.0 points in 14.4 minutes per game.

(This story has not been edited by NDTV staff and is auto-generated from a syndicated feed.)
Comments
Milwaukee policeSterling BrownMilwaukee Bucks