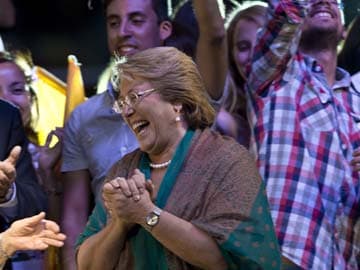 Chilean president-elect, Michelle Bachelet, celebrates after getting the results of the run-off presidential election in Santiago on December 15, 2013.

Santiago, Chile: Michelle Bachelet, the winner of Chile's presidential runoff Sunday, years ago became her country's first female president and now has a chance to cement her legacy with a second term.

The socialist, agnostic pediatrician has been on a dramatic rollercoaster ride of a life that has seen her tortured in her own country, only to come back to lead it.

She became Chile's first female president in 2006, and she had a stunning 84 per cent approval rating when she left office in 2010.

But she came home to Chile this year saying "we knew there were things still to be done."

On Sunday, she trounced conservative Evelyn Matthei, 60, by earning 62.40 per cent of the vote against her rival's 37.50 per cent, the national electoral board said with 81.05 per cent of votes tallied.

That gives her the kind of popular mandate she wanted to tackle her long list of reform goals: raise taxes, offer free post-secondary education and legalize abortion.

Socialist Bachelet and her "New Majority" leftist alliance want to overhaul the government structure left in place by the 1973-1990 military regime led by Augusto Pinochet, a legacy that oddly is still the rulebook for modern, democratic Chile.

Bachelet was born in September 1951 in Santiago. Her father Alberto was an air force officer, and her mother Angela was an archeologist.

When she was young, her father was stationed at Cerro Moreno air base in far northern Chile, where among the neighbors was air force officer Fernando Matthei and his young daughter Evelyn.

Bachelet and Matthei, then aged six and four, sometimes played together.

While the two girls weren't great friends or in the same class, growing up on a military base instilled in both of them a sense of order, duty and a love of learning.

Bachelet joined the Socialist Youth as a teenager and studied medicine, while her father rose to the rank of general and became a close adviser to elected socialist president Salvador Allende.

When right-wing officers launched a military coup in September 1973 that killed Allende, Alberto Bachelet was on the list of suspects.

The general was imprisoned at a military school and tortured, and died from his wounds six months after being released. The school commandant was Fernando Matthei.

A later inquiry absolved Matthei of any role in Alberto Bachelet's torture.

The Bachelets, however, remained "suspects," and secret police whisked Michelle Bachelet and her mother to a torture center in January 1975.

Over the years, Bachelet had revealed few details of her experience.

But during the campaign this year, she said that she was personally interrogated by Manuel Contreras, the head of the country's reviled DINA secret police.

Bachelet entered the campaign as Chile marked the 40th anniversary of the coup this year.

Years later, after being freed from detention, Bachelet and her mother fled to Australia and then moved to East Germany, where the future president completed her medical studies.

Bachelet returned to Chile in 1979 with her young son, but was prevented from working as a doctor for political reasons.

She continued studying, specializing in pediatrics and public health, and in 1984, gave birth to a daughter.

Dr Bachelet steps up to service

After democracy was restored in 1990 Bachelet worked for the health ministry.

But she was also interested in military issues, and in the mid-1990s studied military strategy in Chile and the United States.

In 2000, socialist president Ricardo Lagos appointed Bachelet health minister. Her success led her to become minister of defense in 2004, the first time a woman held the post.

By now, Bachelet was a political phenomenon.

She offers a dramatic break from Chile's highly conservative traditional political class; she was a divorced mom and grandmother before Chile even had legalized divorce -- in 2004.

As president, Bachelet reformed the pension system, improved health and social services, and focused on the well-being of Chile's working class and elderly.

Promoted
Listen to the latest songs, only on JioSaavn.com
Her tenure also coincided with a boom in global demand for copper, Chile's top export.

When she handed the office over to the current president, conservative Sebastian Pinera, Bachelet enjoyed record approval ratings despite criticism over the slow response to the massive February 2010 earthquake.