Mercury Is About To Pass In Front Of The Sun, And It Should Be Incredible To Watch 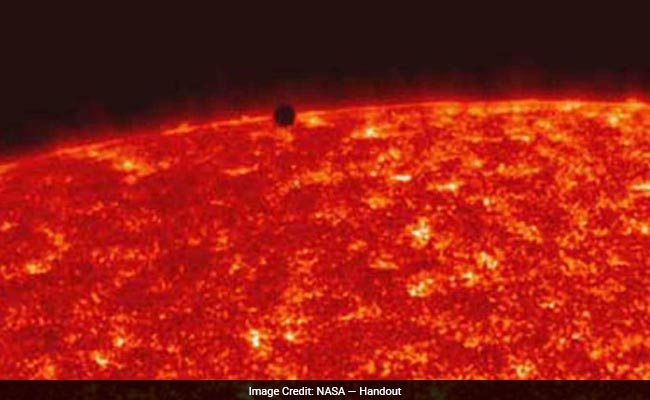 It happens around 13 times a century: From our perspective, Mercury - the smallest planet in our solar system - will pass in front of the sun. Most of the world, including the United States, on Monday will be able to see the planet as a tiny black dot passing slowly in front of its host star. You shouldn't stare directly into the sun (ouch), but by watching online or using a telescope with a special filter, you can see Mercury in all its tiny glory.

If you have your own telescope, you can watch the event using a safety filter to protect your eyes from the sun. If you don't have a filter handy, you can use a sheet of paper to rig up a safe viewing method - you can project the image of the sun (in the form of a white disk) onto a sheet of paper, then watch the black dot of Mercury crawl across it. You can also check out NASA's websites and social media accounts for live image updates. If you live near an observatory or science center, you should check out their plans - you may be able to pop in and take a peek on their telescope.

But why should you care? Because it's a very special event for a very cool little planet.

Mercury has an orbital period of just 88 days, making it by far the fastest orbiter in the solar system. And while Mercury is orbiting, so are we - at a completely different pace. So for our planets to line up just so for us to see the other world sweep over the sun is an uncommon event. This is the first Mercurian transit since 2006, and we won't see another until 2019.

Wait, you say - that's a lot of transits to have in just over a decade. How do we average out at just 13 for every 100 years? Mercury passes between the Earth and the sun every 116 days, but its orbital plane is skewed away from our own by a few degrees. It orbits the sun on a tilted trajectory, by our perspective. So its intersection with our orbit has to happen when it's also intersecting with our orbital plane. That combination of factors makes for some pretty wonky math: There's a pattern to the frequency of Mercury's transits, but it's not as simple as "every x number of years." It's more like "every x number of years for awhile, then y, then z, then y again, and then z three times because why the heck not." Orbital resonance is weird.

Venus - the only other planet between us and the sun, so also the only other planet that transits from our perspective - orbits much more slowly and on a plane slightly less skewed than Mercury's. Venusian transits are more rare, but also a little easier to keep track of: They happen in pairs separated by eight years, with each pair separated from the next by a century and some change. If you missed the 2012 transit, you're out of luck. The next one isn't coming until 2117.

Transits outside our own neighborhood are pretty cool, too: We use the transits of exoplanets in front of their host stars to detect their presence, and even to measure them and analyze their atmospheres for signs of habitability.

Now that we've got the orbital positions of our neighboring planets down pat, transits aren't the grand scientific opportunities they used to be.

"Scientifically, this was much more important a few hundred years ago," Nancy Chabot, who served as lead imaging scientist for NASA's MErcury Surface, Space ENvironment, GEochemistry, and Ranging mission (MESSENGER), told The Post. The MESSENGER spacecraft wrapped up its mission last year when it crashed down onto Mercury's surface.

But scientists can still get something out of the transit. They'll be able to analyze Mercury's scant atmosphere - the thinnest in the entire solar system - in the same way that scientists use the passage of light through molecules in exoplanet atmospheres to search for signs of life. They can even use the event to calibrate instruments on spacecraft, because the timing and positioning of Mercury's transit over the sun's surface is so reliable. Telescopes can be pointed in the right direction based on Mercury's placement, and some instruments can even correct their vision based on the event.

"It's like getting a cataract - you see stars or halos around bright lights as though you are looking through a misty windshield," NASA scientist Dean Pesnell said in a statement. Mercury should appear totally black against the sun's light, but the way instruments scatter light may cause it to look slightly lit up. Scientists can use the event to try to retune those instruments to see Mercury in its true colors, which could prevent mishaps when observing more mysterious objects.

Chabot hopes the event will inspire the public to look up into the sky and think about our planetary neighbors. On Friday, she and the rest of the MESSENGER team released the first ever complete topographic map of Mercury.

"It's really well-timed," she said. "People will be looking."

Her team learned plenty of fascinating things about Mercury during the mission. Chabot said she "didn't want to pick favorites," but found three features to be particularly intriguing:

"One is that it's got these giant areas of volcanic lava that have flowed across the surface in ancient times, which takes up an area more than half the size of the U.S. The epic volcanic events that must have occurred to cause that are intriguing," she said.

Mercury also has features called "hallows" that have never been seen anywhere else. The small depressions appear to be spots where rocks - ones unable to stand up to Mercury's environment - sublimate away like snow on a warm day.

"Rocks don't usually just disappear into space, but they do on Mercury." Chabot said.

Chabot spent most of her time focusing on the water ice that forms at Mercury's north and south poles, which are permanently shadowed. Finding it there was great, she said, but it raises new questions. How did it get there, when, and what might it tell us about how water found its way to Earth?

"You answer one thing in science and you're left with all these intriguing new questions," she said.

Seeing Mercury as a tiny dot in front of the sun isn't going to answer any of those questions -- or even allow you to see those alien features. But you should still consider checking it out.