Trump's trip was a low-key one that generated few big headlines, a fact that had much to do with the news cycle at home, which was dominated by the Kavanaugh news. 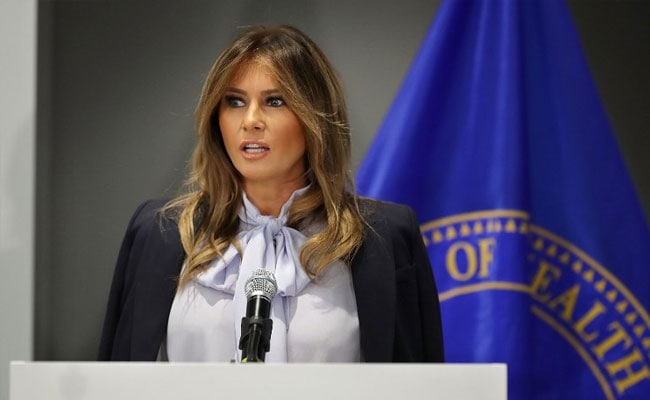 Melania Trump had a week-long visit to Ghana, Malawi, Kenya and Egypt. (File)

The visual was striking - Melania Trump stood in front of Egypt's Great Sphinx, doing something she rarely does: Speaking about the news of the day.

Reporters traveling with her as she traversed Africa this week asked her about the news back home of the confirmation of the president's Supreme Court nominee Brett Kavanaugh and the allegations by Christine Blasey Ford that he sexually assaulted her.

She spoke of sexual assault victims who have been speaking up, sounding a far more sympathetic note than President Trump, who has mocked Ford. "We need to help all the victims, no matter what kind of abuse they had," she said. "I'm against any kind of abuse."

The first lady, who so often comes across as sphinx-like herself and has often remained silent amid the din of her husband's administration, was unusually outspoken.

"I don't always agree what he tweets and I tell him that. I give him my honest opinion and honest advice. Sometimes he listens sometimes he doesn't. I have my own voice and my opinions and it's very important to me that I express how I feel."

Asked if she has ever told him to put his phone down, she replied, "Yes!"

As she prepared to end her trip, she lamented the social-media mocking of a pith helmet she wore in Kenya - a sartorial choice many saw as a throwback to the colonial era - saying she wished people would "focus on what I do, not what I wear."

But though she bemoaned the focus on appearances, Trump carefully curates her public image, and no more so than during the week-long visit to Ghana, Malawi, Kenya and Egypt.

The journey has produced a set of photos designed to burnish the first lady's public profile and generate goodwill in a continent wary of her husband's administration.

Trump, who often comes across as removed, rehearsed and aloof - a former fashion model perched on five-inch stilettos, reading from scripts - appeared more spontaneous and at ease as she visited tourist sites, schools, hospitals, and orphanages.

In Cairo, Trump was greeted by Egypt's first lady, Entissar al-Sissi. The pair then went to the presidential palace to have tea, where Trump was also greeted by President Abdel Fatah al-Sissi.

The meetings were cordial, absent of any discussions of controversial topics such as President Donald Trump's derogatory comments about African countries, according to local news reports.

By the afternoon, the first lady was on her way to see Egypt's most famous treasures. Near the Pyramids complex, streets were being cleaned and spruced up ahead of her arrival, but hardly any locals were around.

At the base of the Sphinx, Trump observed a project of the United States Agency for International Development to protect the Sphinx and several of the country's other important archaeological sites from rising groundwater.

During a visit Friday to a Kenyan orphanage, she swayed to a drum beat as she walked, holding hands with two children, as they crossed a flower-lined courtyard. She laughed as she fed a baby elephant from a bottle at a refuge in Kenya.

And she appeared visibly moved by her visit earlier in the week to Cape Coast Castle in Ghana, where slaves were held captive in dungeons before they were sent abroad on ships.

"It's very emotional," she said after spending time there and laying wreaths in the cells. "I will never forget the incredible experience and the stories that I heard."

But aside from escaping Washington's tumult and softening her own image, what did she accomplish on her first major solo trip abroad?

She seemed to pass the first test of any diplomatic mission: show up and show good will.

Foreign policy experts, though, say the trip did little to reassure Africans that the Trump administration, which has largely ignored the continent and has proposed budget cuts to programs offering aid, would make them a priority.

"She came, like many U.S. first ladies, to hold children, to say the right thing - and she has done that," said Boubacar N'Diaye, professor of Africana studies at the College of Wooster. "I'm sure in her heart she means those things - but that is very different from real policies that the government cares about."

Others saw the visit as a gratifying gesture and said it raised her profile, even as it was unclear what effect, if any, it would have in terms of U.S. policy.

"My take from the visit is very positive," said Edward Saweregera, Malawi's ambassador to the United States. The first lady was warmly received, he said, and the fact that "Malawi was one of the chosen few countries" she toured underscored the U.S.- Malawi bond. Most people in Malawi didn't know much about Melania Trump before she arrived, so "it was a chance to get to know her," he said.

As for any impact on policy, the ambassador added, "That I will leave to the U.S. government."

Trump's trip was a low-key one that generated few big headlines, a fact that had much to do with the news cycle at home, which was dominated by the Kavanaugh news. And her schedule, including visits to a hospital, a school and American embassies, was relatively light.

Judd Devermont, Africa program director at the Center for Strategic and International Studies, said that judging from news coverage in African countries she visited, "interest in her trip ranged from mild interest to indifference."

Before her final story, the first lady spoke publicly only a few times, and then very briefly.

"Thank you for educating them to be best," she said after touring a school in Malawi, echoing the name of her "Be Best" initiative aimed at children's well-being. "And to grow up into educated adults for generations to come."

She avoided, as some quipped, the elephant in the room. She told reporters that her husband's derogatory comments about African nations (he called them "shithole countries" and also wondered whether Nigerians would return to "their huts" after coming to the U.S. on visas) had not come up during her visit.

Lauren Wright, the author of "On Behalf of the President" and a politics lecturer at Princeton, said Melania Trump could have done more to smooth over the president's slurs, and the fact that she chose not to seems significant. "What would help would be is if she directly addressed her husband's comments about the continent," she said. "She doesn't clean up president's messes - she does her own thing. She's made it clear that she's not there to rescue him, even though she's the only one who can do it."

Even Melania Trump's husband reacted to the trip as if it were something he watched on a television set on mute. "Our country's great first lady, Melania, is doing really well in Africa," he tweeted on Wednesday. "The people love her, and she loves them! It is a beautiful thing to see."

But perhaps the trip will spur Melania Trump to find her voice. In addition to the interview in Egypt, she is scheduled for a rare televised sit-down to air Friday on ABCs "20/20." The network is promising a "wide-ranging" interview between the first lady and Tom Llamas, the weekend "World News Tonight" anchor who traveled with her on the Africa trip.

Paolo Zampolli, a longtime friend of the Trumps, says the first lady might make more such trips, possibly to Central and South America next. The trip to the African nations served to "fly the American flag there."

And it remains to be seen whether, up on her return, that the first lady will press the president to take more of an interest in the countries she visited - and whether he will listen.

Even though the Trump administration loosened regulations to allow big-game hunters to import tusks, hides and other parts of animals, and her stepsons, Donald Jr. and Eric are hunters, Melania Trump visited a big-game conservation site.

"She thinks animals are precious and she doesn't like big-game hunting," spokeswoman Stephanie Grisham said.

Despite War, Thousands Of Jews In Ukrainian City For Annual Pilgrimage