As a woman in a "Make America Great Again" hat shouted for stricter enforcement of immigration laws, Alex Kack's eyebrows arched. When she stood up, an incredulous smile spread across his mustachioed face. Then she pulled out her sign, and Kack lost it. 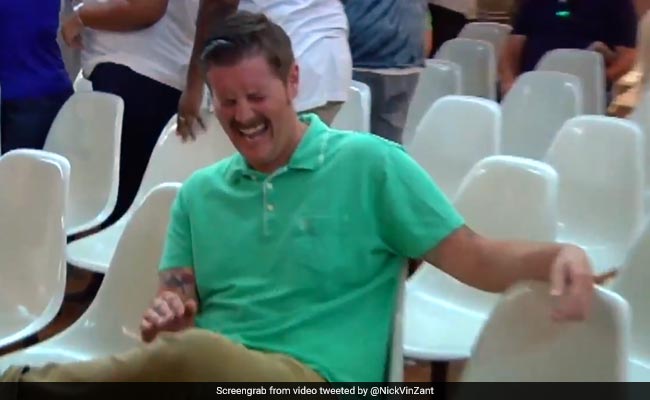 "It kind of just happened, and it was so absurd," Alex Kack said

Alex Kack couldn't believe what he was seeing.

He was sitting front row at the Tucson City Council meeting Tuesday night when the scene began unfolding next to him. As a woman in a "Make America Great Again" hat shouted for stricter enforcement of immigration laws, Kack's eyebrows arched. When she stood up, an incredulous smile spread across his mustachioed face. Then she pulled out her sign, and Kack lost it.

For the next 30 seconds, his body shook with laughter.

"It kind of just happened, and it was so absurd," Kack said in an interview with The Washington Post.

And there, in a city hall in southern Arizona, a perfect parable of modern American politics played out. It had everything: the divisive issue of sanctuary city laws; the shouting, red-capped conservatives clamoring for deportation; the roaring, slightly profane response from liberals; and Kack's what-else-can-you-do-but-laugh howling.

All that, caught on video and posted online by a local television reporter, swirled together with a little Internet je ne sais quoi on Wednesday and birthed a sensation so viral that by that evening footage of the encounter had been viewed nearly 5 million times, and Kack netted more than 20,000 new Twitter followers. He is now known as #GreenShirtGuy, so-called because of the lime green polo he was wearing that is, he conceded, "more famous than I am."

Scene inside a Tucson City Council Meeting. Officials voted to put a "Sanctuary City" measure on the November ballot pic.twitter.com/mEh4PNj0Wo

As the woman and her male companion, reportedly members of an anti-immigrant group, continued shouting and holding signs that read in part, "Stop rewarding, start deporting," those seated around them got up and left the room. But Kack stayed in his chair, cracking up the whole time, as police officers escorted the two out of the meeting.

"I wanted to see how it ended," he said. "The police were coming, they were screaming, people were screaming back at them. How are you going to miss out on that level of political theater?"

Kack was still audibly bewildered at his sudden social media stardom on Wednesday night - "I'm not even sure how to describe it," he said, "pull out a thesaurus and find a word" - but he is a longtime activist and self-styled progressive.

The 28-year-old is a field organizer with the People's Defense Initiative, a Tucson-based advocacy organization pushing for an amendment to city code that would prohibit local police from cooperating with federal authorities to enforce national immigration laws. It was the group's legislation in front of the city council on Tuesday.

"It's a historic moment," Kack said of the effort. "The movement in this nation to protect migrants and refugees has a long history in Tucson. This is absolutely the time for us to put in place a law that enshrines those values."

He said he believes the protection of migrants and their families is a moral imperative, one of the few clear-cut examples in American law. Anyone who would oppose that, especially so vehemently, deserves to be a laughingstock, he said.

"You come into this formal public setting like that, you take time out of your day to travel here, show up and yell racial obscenities," Kack said. "For what end? For what purpose?"

"I think the laughter struck a nerve on Twitter because that's how a lot of the country feels about it," he continued. "Philosophically, I don't even know what the best way is to meet and challenge this. The ideology is obviously dangerous, but it's inherently silly. I mean, good God, get a different hobby."

Kack has been politically active since George W. Bush's presidency - "it wasn't a great time; recession, war, take your pick." When he was younger, he said, he was probably more "radical," more into direct action.

But even then, he said, he still sometimes found himself voting for members of both major parties, and some minor ones, in local elections. Since President Trump took office, though, that occasional bipartisanship has ended.

Now, he said, the country is so polarized all you can do sometimes is joke about it. And he does that, too, during his side hustle as a stand-up comedian, playing mostly local gigs.

But for a man famous for his laughter, Kack can strike a somber note - especially when discussing the rights of migrants, refugees and the undocumented. It pains him, he said, that immigration policies force some people to worry about being separated from their families, about a routine interaction with the government leading to a deported parent or child: "It's immoral."

"Well," he said, as the interview concluded, "that got a little more heavy than you thought the 'Green Shirt Guy' would get, didn't it?"