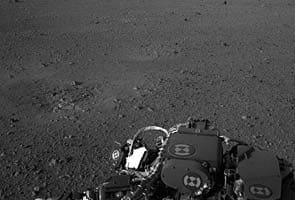 Cape Canaveral: Initial analysis of the atmosphere of Mars from NASA's rover Curiosity has shown no sign of methane, a gas detected previously by remote sensors, researchers said on Friday.

On Earth, more than 90 per cent of the methane in the atmosphere results from living organisms and its presence in the Martian atmosphere, first detected in 2003, raised the prospect of microbial life on the planet.

Although no methane was detected during Curiosity's first detailed atmospheric analysis, scientists working under the auspices of the U.S. space agency plan to keep looking.

In addition to chemically analyzing soil and rocks, Curiosity is equipped to sample and study gases in the planet's thin atmosphere.

The rover's onboard laboratory looked for methane in concentrations as small as five parts per billion. Scientists so far have no explanation as to why Curiosity has found no methane, when orbiting probes and ground-based telescopes have previously found evidence of the gas on Mars.

As well as being produced by living organisms, methane is also generated by geological activity.

Methane would not have to be released at Curiosity's landing site inside Gale Crater for the rover to detect it, according to atmospheric chemist Sushil Atreya of the University of Michigan at Ann Arbor.

"If there is a source of methane elsewhere, it does not take very long for it to get distributed over the planet - about three months," Mr Atreya said.

"As we monitor (for) methane over time, we may be able to say more about the possibility about any sources in the Gale Crater region," he said.

Measurements of other atmospheric gases have proven more fruitful.

An analysis of carbon, argon and other isotopes, which are variations of particular chemical elements, indicates that Mars, as suspected, has lost significant amounts of its atmosphere to space over time.

"The gases in the current atmosphere are a product of Mars' entire history," said Curiosity scientist Laurie Leshin of the Rensselaer Polytechnic Institute in Troy, New York.

The goal of the two-year, $2.5 billion Curiosity mission is to determine whether Mars, which is cold and dry today, ever had the chemical and environmental conditions to support and preserve microbial life.

"Did Mars once have abundant flowing water, and if so why is the climate so cold and the atmosphere so thin today as to preclude this?" Mr Leshin said.

"By studying today's atmosphere, we can gain clues to how Mars' environment has changed," she said.