Mark Zuckerberg's video comes at a time when his fortune has been cut in half, dropping by $71 billion so far this year. 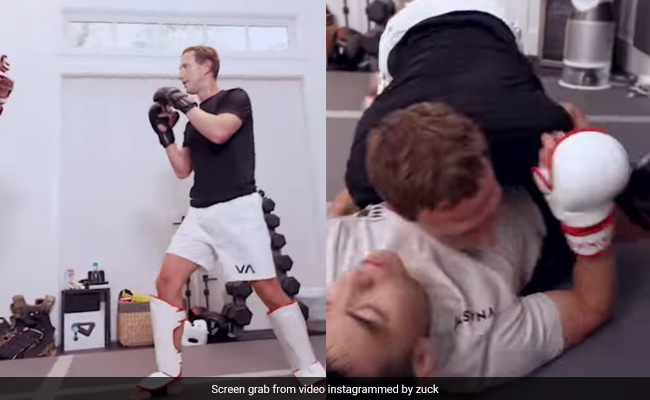 Mark Zuckerberg posted a video on Instagram is seen trading blows as part of MMA fight.

Facebook co-founder Mark Zuckerberg is the latest celebrity to take up mixed martial arts (MMA), and his trainer has described him as a "silent killer" in the ring. The 38-year-old posted a video on his official Instagram handle earlier this month in which he is seen sparring with Khai Wu, a professional mixed martial artist and jiu-jitsu black belt. The Facebook co-founder described Mr Wu as his training partner. Mr Zuckerberg has participated in private training sessions with Mr Wu and others for the last several months, according to The Information.

PayPal CEO Dan Schulman, who trains in krav maga, and Palantir CEO Alex Karp, who has taken up both jiu-jitsu and aikido are the other millionaires who have chosen these combat sports to take their minds off the current tech sector slump.

He, however, added that Mr Zuckerberg has become a weapon. "You'd never expect these guys to be able to take you down. Next thing you know, they're attacking you with these extremely technical moves. You don't know this nerd is a silent killer."

In the September 3 video, an intense-looking Mr Zuckerberg is seen trading blows and takedowns with Mr Wu ahead of his debut on UFC Fight Pass.

"One of my training partners, @khaiwu, is making his @ufcfightpass debut tonight. Go get it Khai and looking forward to a great fight!" Zuckerberg captioned the video.

He talked about his new hobby on The Joe Rogan Experience podcast where he said it has helped his physical well-being and his performance in the office.

The billionaire spoke about his hobby at a time when his fortune has been cut in half, dropping by $71 billion so far this year, the most among the ultra-rich tracked by the Bloomberg Billionaires Index.

Explainer: What Will Happen If China Relaxes Zero-Covid Curbs