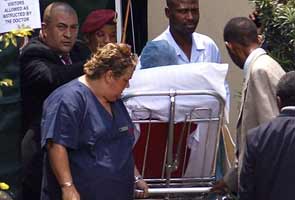 Johannesburg: Former South African President Nelson Mandela was whisked home Friday from a hospital where the 92-year-old had been treated for a respiratory infection, with only a glimpse of his head covered by a surgical cap visible as he was wheeled into an ambulance.

That brief view could symbolize Mandela's increasing disengagement from public life. South Africans expressed joy Friday that he is recovering but there was also wistful realization that an icon is fading. Officials said Mandela now would be cared for in hospital-like conditions at home.

"Everyone was holding their hearts and saying not now," said Patricia Ramaila, who has lived across the street from Mandela for four years. "A person like Mr. Mandela -- we still need him."

Mandela, who became South Africa's first black president after serving 27 years in prison for his fight against racist rule, largely retired from public life in 2004. He has made even fewer appearances in recent years while others like retired Archbishop Desmond Tutu have increasingly taken on the role of South Africa's national conscience.

Army Surgeon-General Vejaynand Ramlakan said Friday that Mandela's condition was stable, and that he takes medication for a chronic, unnamed condition and needs help to walk. Officials said he was joking with his wife and nurses, and in good spirits.

"Despite all of this, his amazing positive attitude allows him to cope with the difficulties of old age with the greatest of grace," Ramlakan said.

Mandela himself has pushed his fellow South Africans to think beyond him. At his insistence, his foundation switched from a logo featuring his face to one featuring his hands, reflecting his desire to shift the focus from himself.

When he reached 91, his July 18 birthday was declared Mandela Day, and he urged people to observe it by painting schools, reading to the elderly and taking on other tasks to build their communities.

"It is in your hands to create a better world for all who live in it," Mandela said then.

A dearth of updates since Mandela was admitted Wednesday afternoon had led to speculation and concern about his condition. Journalists camped outside the hospital and his Johannesburg home. Officials said Friday that Mandela's office has received more than 10,000 messages of support and well wishes, including from U.S. President Barack Obama.

Deputy President Kgalema Motlanthe, who is in charge while President Jacob Zuma is traveling abroad, said communications should have been better.

"Madiba has received similar checkups in the past and it's never raised the same public panic it has now," Motlanthe said, explaining why officials had not been prepared. South Africans affectionately call the 92-year-old Madiba, his clan's name.

The army surgeon-general told reporters that Mandela's respiratory infection was acute, but that he was being sent home after about 48 hours at Johannesburg's Milpark Hospital. The army is charged with the care of former presidents in South Africa.

Mandela also had a respiratory infection eight years ago and also had contracted tuberculosis in 1988 while in prison, Ramlakan said. Mandela has written in his memoirs that the bout of TB did not damage his lungs. In 1985, Mandela also had surgery for an enlarged prostate gland.

Ramlakan would not say whether Mandela's most recent infection was in the upper or lower regions of his respiratory tract.

Acute respiratory infections refer to a range of diseases that could include the common cold, flu, strep throat or bronchitis, among other illnesses. Treatment generally lasts seven to 10 days.

An infection of the lower respiratory tract could signal pneumonia, which could require greater care. Many elderly patients with pneumonia are often treated at home with oral antibiotics, fluids, and possibly steroid drugs to reduce inflammation in the lungs.

Mandela was released in 1990 after 27 years in prison for his fight against apartheid. He became South Africa's first black president in 1994 and stepped down after serving one term in 1999.