Man Tries To Kiss King Cobra On Head, Video Will Give You Goosebumps

A video from Indonesia is going viral, which shows a man trying to kiss a King Cobra on his head in presence of a huge audience. 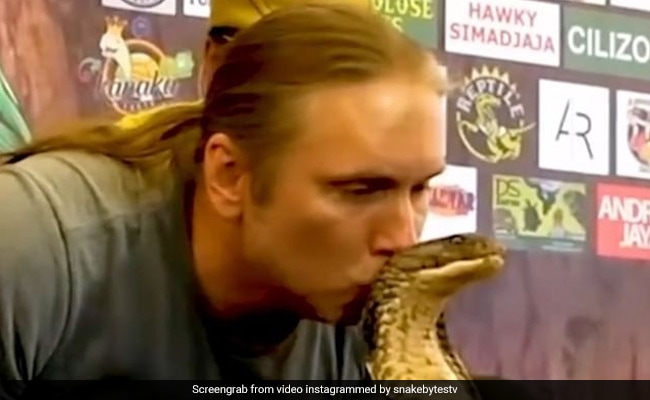 A an kissing Cobra in the presence of a huge audience.

A video from Indonesia is going viral, which shows a man trying to kiss a King Cobra on his head in presence of a huge audience. Initially, the snake feels anxious but soon, the man plants a second kiss and it remains calm.

The brave person is Brian Barczyk, an expert on wildlife from Michigan who runs an Instagram handle "snakebytestv". Mr Barczyk is passionate about educating animal enthusiasts of all types about the fascinating world of reptiles.

The video has been shared by Mr Barczyk on his Instagram page with the caption, "Something I definitely don't recommend anyone to do but something I would definitely do again."

King Cobra, one of the most venomous, is also the longest among all such snakes. It is found in the rainforests of Southeast Asia. This variety of cobra has a maximum length of 5.85 metres.

The venom of the King Cobra is highly neurotoxic, and a human being can die within 15 minutes of being bitten. The snake is also known to bite several times in a single strike.

Close proximity or rapid movements can easily annoy the cobra. When King Cobra lifts its body, it may still move forward and attack from a considerable distance.

The snake in video is in a defensive position but Mr Barczyk still decided not to come in front of it. He dropped both the kisses from behind. The first time, the venomous snake even opened its mouth, ready to bite the expert.

He then attempts a second kiss and this time, the snake doesn't move.

The video has received over 13,000 likes on Instagram. Many Users have praised Mr Barczyk's attempt in the comment section.