Machelle Hobson pulled the children out of school, police said, and once pinched one boy's genitals so hard he bled. 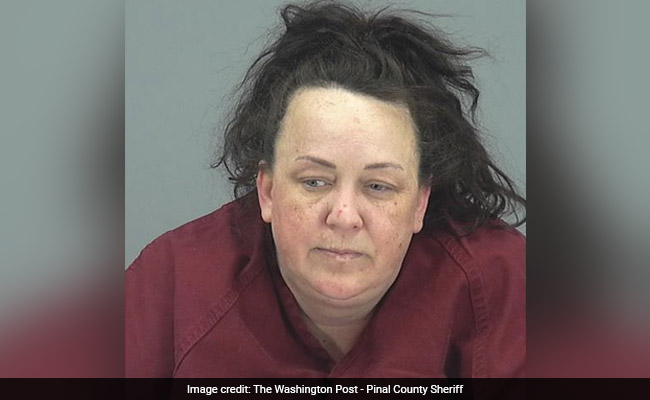 Machelle Hobson would allegedly beat the children with belts and hangers, assault them with pepper spray

Machelle Hobson, the Arizona mother accused of torturing her seven adopted children who starred in her popular YouTube series "Fantastic Adventures," has died at a Scottsdale hospital, authorities say.

Hobson was arrested in March after her adult biological daughter reported her actions to the Maricopa Police Department. Investigators say the 48-year-old woman had been orchestrating a creative, moneymaking YouTube enterprise in public while privately abusing the adopted children, who ranged in age from about 6 to 15, by starving and shutting them in a tiled closet for days at a time.

To punish what Hobson perceived as subpar performance on the YouTube show - which garnered nearly 800,000 subscribers and hundreds of millions of views on YouTube - the woman would allegedly beat the children with belts and hangers, assault them with pepper spray and force them to take ice baths, according to court documents.

Hobson pulled the children out of school, police said, and once pinched one boy's genitals so hard he bled.

Hobson pleaded not guilty to dozens of felony counts, including child abuse and kidnapping. She remained in police custody for several months on $200,000 bond.

But in June, she was released from jail without bond because of health complications, reported Pinal Central. In August, Pinal County Superior Court Judge Delia Neal declared Hobson incompetent to stand trial. She had been hospitalized, but the judge ruled that her defense team and the Pinal County prosecutor's office had 15 months to restore Hobson's competency - meaning it would work to help her arrive at a place where she could answer questions about her judicial proceedings and consult with her attorneys.

"I believe she will be restored (to competency)," Pinal County Attorney Kent Volkmer told Pinal Central in August. "I believe the 15-month time frame is enough for us to get her restored, allow her to be brought back into court for her to be held accountable, and ultimately go to trial and find her guilty."

The plan, Volkmer told ABC 15 at the time, was to get Hobson the care she needed to be healthy enough to return to police custody.

Hobson's poor health - which stemmed from a brain injury sustained while in county jail - initially improved, Volkmer told reporters at a news conference Wednesday afternoon. As recently as Oct. 28, the county attorney's office had received a progress report that Hobson was able to carry on conversations and identify people relevant to the case.

But a week ago, Volkmer said Hobson stopped eating and taking medications. Her health worsened over the weekend, and law enforcement agencies were notified Tuesday that she had died at 10 a.m. at HonorHealth Shea Medical Center in Scottsdale.

The cause was natural, Scottsdale police spokesman Kevin Watts said in an email.

Volkmer said at the news conference that he could not elaborate on Hobson's medical details. His office had received some of the information through her attorneys, and he said he was bound by privacy guidelines. All he could say was that an "event" occurred at the county jail in May. The result, he said, was a brain injury, and at that time Hobson left state custody.

The brain injury was not the result of an assault, Volkmer said, and to his knowledge it was not self-inflicted.

He was candid about the case's unconventional end.

"We were looking forward to the opportunity of proving our charges and proving her guilt in this case," Volkmer said. "Because of the resolution of this case, these kids don't have to testify, which means they now can begin the healing process, they can move on to the next chapter in their life, and so from that perspective I am happy that the victims can start to move on."

The seven adopted children, many of whom had been fostered before their adoption, were released back to state custody after Hobson's arrest. They have been assigned caseworkers and legal advocates, who are trying to find the children new permanent homes - and keep them all together, Volkmer said.

"They're doing better than when this case started, I can assure you that," Volkmer said, adding that the children would have been retraumatized had they been forced to testify against Hobson before a jury and the nation's gaze.

Still in question are Hobson's assets and the money she made from the YouTube channel. "Fantastic Adventures" was demonetized and eventually shut down after Hobson's arrest. Volkmer said part of the investigation was focused on locating her assets and seizing them, since the profits were directly related to the alleged abuse.

But since the criminal case will be closed, Volkmer said the children and their legal advocates must now fight for that money through a civil case.

The woman's two adult sons, Logan and Ryan Hackney, were initially arrested at the same time as their mother for not reporting her behavior, police said at the time. Those charges were dropped soon after, reported the Arizona Republic.

Ryan Hackney, who was 25 at the time, declined to speak to police. His brother Logan, 27 at the time, told investigators that he and his brother had discussed reporting their mother's behavior. He also confirmed that he had heard the children screaming and crying, that he saw their injuries and knew his mother had sprayed them with pepper spray and forced them into ice baths, reported the Arizona Republic.

At Wednesday's news conference, Volkmer said his office chose not to bring charges against the Hackney brothers because they did not feel they could meet the burden of proof. Legally, the two men were not obligated to care for the children because they were siblings and not legal guardians.

Asked whether justice had been subverted by Hobson's death, Volkmer said: "I would not say she escaped the hands of justice because she is no longer here."