The January 6 committee is seeking phone records on communications related to what took place, and to interview others who were at the Willard InterContinental. 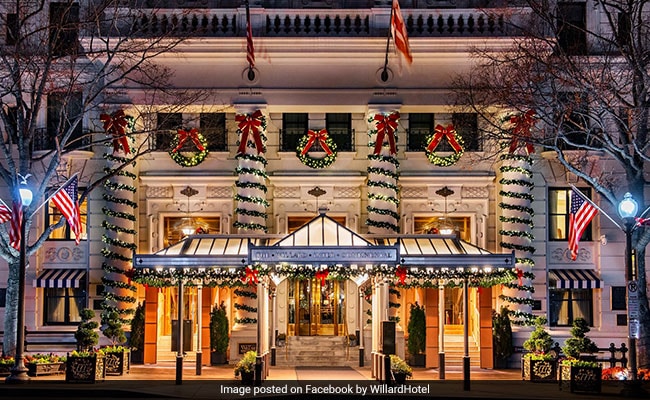 A "war room" set up in a luxury Washington hotel by advisors of president Donald Trump has become the focus of the congressional investigation into the violent January 6 attack on the US Capitol.

Trump strategist Steve Bannon and legal consultants Rudy Giuliani and John Eastman worked in suites at the Willard InterContinental across the street from the White House in the days surrounding the attack, in which Trump supporters stormed Congress to halt certification of Democrat Joe Biden's presidential election victory.

They and others are suspected of maintaining communications between the White House and groups involved in so-called "Stop the Steal" protests, according to a congressional resolution holding Bannon in contempt last week.

Bannon, who rejected a subpoena to testify in the January 6 investigation, was cited for his "role in constructing and participating in the 'stop the steal' public relations effort that motivated the attack."

That included, the resolution said, "his participation in the events of that day from a 'war room'" at the Willard.

First established in 1847, the elegant Willard has long been a hub for high society, political powerbrokers and visiting dignitaries in the US capital, especially those visiting the White House.

The term "lobbyist" gained currency in Washington, where people hung out in the Willard's lobby seeking to influence US presidents and other politicians.

Earlier this year independent investigator Seth Abramson, on his website "Proof," documented that dozens of people involved in trying to reverse Biden's November 2020 election victory over Trump were at the hotel in the run up to January 6.

The House special committee probing the January 6 insurrection is examining whether people close to the White House, including potentially Trump himself, instigated the attack on the Capitol, which shut down for several hours the joint session meant to confirm Biden as election winner.

The Willard operation has also come into focus because of the explosive new book, "Peril," an account of the last weeks of the Trump presidency by Washington Post journalists Bob Woodward and Robert Costa.

They document how Eastman fashioned an extraordinary legal strategy for Trump to have vice president Mike Pence block Biden's confirmation in Congress on grounds of alleged election fraud.

(There has been no evidence to support significant fraud claims.)

On January 5 Trump told supporters that Pence had agreed to block Biden's certification the next day.

But according to Woodward and Costa, in an evening meeting Pence rejected the pressure.

After that meeting Trump made at least one call to the Willard operation.

"After it doesn't go well for Trump, he calls in to the Willard War room.... He's coordinating this effort to speak for Pence," Costa said Monday on MSNBC.

Who Trump spoke to and what was said are not known. The January 6 committee is seeking phone records on communications related to what took place, and to interview others who were at the Willard.

Bannon is a key figure because, according to "Peril," in December he encouraged Trump to use the unsupported claims of voter fraud to stop certification on January 6.

In a podcast on January 5, Bannon predicted the next day would be momentous, successfully blocking Biden's presidency.

"It's all converging and now we are on the point of attack," he told listeners.

"We're on the cusp of victory.... All hell is going to break loose tomorrow."

The Willard operation was not secret.

"We had a war room at the Willard Hotel, kind of coordinating all of the communications," Eastman told Denver radio talk show host Peter Boyles in May.

Abramson also documents a key meeting at another hotel nearby, the president's own Trump International, where on the night before the attack Trump's sons, Giuliani, several top advisors and Republican officials gathered.

But Woodward told MSNBC on Monday that the communications involving the White House and the Willard operation on January 5 were central to what happened the next day.

"Bannon and Trump realized that this is the point that they have to blow it up, and that's exactly what they did," he said.