'Life Is A Campaign': After A Difficult First Month, Trump Returns To His Comfort Zone 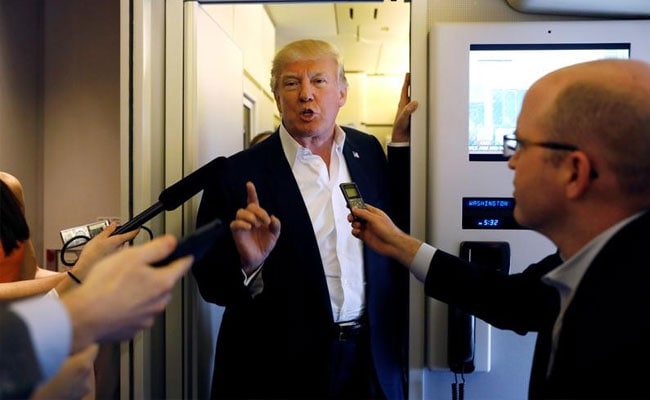 Donald Trump reiterated his campaign promises, bragged about things he has already done.

MELBOURNE, Fla.: As President Donald Trump descended the stairs from Air Force One on Saturday evening, with a patriotic country song playing and thousands cheering, the 2020 election season officially began.

Although the past several presidents have waited more than two years before jumping back onto the campaign trail, Trump's first four weeks in office have shown that he just can't stand too much time in Washington. One adviser calls political rallies the president's "oxygen" - and Trump seemed to direly need a deep inhalation following a week that included his national security adviser resigning and his top replacement pick turning him down, his nominee for labor secretary withdrawing from consideration and accusations involving his campaign and Russia.

The White House promised Thursday that the taxpayer-funded Air Force One would not be used as a "prop" at the political rally - yet Trump used the iconic plane to stage a dramatic arrival at a hangar filled with 9,000 of his supporters. The plane slowly pulled up as the theme song from the 1997 movie "Air Force One" blared, the same routine Trump used to perform with his personal plane.


For 45 minutes, Trump basked in the glow of the love of those who still believe in him and who interrupted him with adoring applause nearly 100 times. He reiterated his campaign promises, bragged about things he has already done, blamed former President Barack Obama for leaving him with "a mess like you wouldn't believe," denounced the "fake news" media, pulled a fan onto the stage, referenced a terrorist attack in Sweden the night before that didn't happen, and compared himself to Thomas Jefferson, Andrew Jackson and Abraham Lincoln. He couldn't hear the chants from hundreds of protesters stationed across the street who accused him of being a hateful dictator and Russia's puppet, among other things.

For 45 minutes, Trump existed in a world where there were no falling approval ratings, no calls for investigations, no criticisms from fellow Republicans, no leaks, no snarky "Saturday Night Live" impersonations, no legal challenges to his authority, no critiques of his Twitter grammar and definitely no questions shouted by reporters. For 45 minutes, everyone had to just listen to him.

Upon taking the stage, Trump laid out three objectives for the evening: To speak to his followers "without the filter of the fake news," to detail his "incredible progress in making America great again" and to share his plans for the future.

He promised to start building a wall on the southern border "very shortly," to reduce violent crime, to sign a new executive order "over the next couple of days" to reinstate the travel ban that was frozen by a federal court, to introduce "a great health-care plan" in a couple of weeks, to increase the number of "products stamped with those beautiful, beautiful words 'Made in the USA' and to put coal miners back to work," a romantic idea that was cheered by Floridians who live far from coal country.

But there was clearly a fourth objective for the evening: To tell his supporters who to blame for any appearance of failure in his first month in the White House.

Those responsible include the Obama administration, he said, telling his fans: "You've seen what we've accomplished in a very short period of time. The White House is running so smoothly. So smoothly. And believe me, I - and we - inherited one big mess. That I can tell you."

And the Democrats are also to blame, he said, for not approving his appointments quickly enough.

"I actually think it's an embarrassment to them, but this is getting in to be record-setting territory," Trump said, later adding: "We have to tell the Democrats, because they're doing the wrong thing for the American people, to stop their tactics of delay and obstruction and destruction. They got to get on with it."

But, really, the "dishonest media" is most to blame, the president suggested as he accused the entire industry of having "published one false story after another, with no sources, even though they pretend they have them."

"They've become a big part of the problem. They are part of the corrupt system," Trump said. "Thomas Jefferson, Andrew Jackson and Abraham Lincoln, and many of our greatest presidents fought with the media and called them out, oftentimes, on their lies. When the media lies to people, I will never, ever let them get away with it. I will do whatever I can that they don't get away with it . . . They have their own agenda. And their agenda is not your agenda."

Trump then quoted Jefferson, who once said that "nothing can be believed which is seen in a newspaper." The president failed to noted that Jefferson also once said: "Were it left to me to decide whether we should have a government without newspapers, or newspapers without a government, I should not hesitate a moment to prefer the latter."

At one point during the rally, Trump spotted a supporter in the audience who had been interviewed on Fox News earlier in the day.

"I saw this man on television just now - you," Trump said. "I just saw him on television. He said, 'I love Trump. Let Trump do what he has to do.' That's my guy right there."

The president then called the man to hop over a barricade and come onto the stage, no doubt frustrating Secret Service agents charged with protecting him.

"Let him up. Let him up," the president said. "I'm not worried about him. I'm only worried he's going to give me a kiss. I'm not worried about anything else. This guy is so great. He was one of many people. They're interviewing people in the line. And I have to say, there's a tiny group of protesters out there. And they were given as much publicity as this massive room packed with people. But they interviewed this man. Come on up here. Come on up. This guy was great."

Trump then handed over the stage to Gene Huber, a wiry man with short hair wearing a T-shirt featuring Trump giving a thumbs-up.

Trump then accused the media of not giving supporters like Huber any credit, even though he only knew about Huber from watching the news.

Trump is an entertainer who has filled his rallies with impromptu moments like this and has claimed credit for turning several of his supporters into stars, if only for one day. He's also a storyteller, and he picked two tales to share with his crowd.

"Within a few days of taking the oath of office," Trump began, "I've taken steps to begin the construction of Keystone and the Dakota Access pipeline . . . As I was about to sign it, I said, 'Who makes the pipe? Who makes the pipe?' Something this audience understands very well, right? Simple question. The lawyers put this very complex document in front. I said, 'Who makes the pipe?' They said, 'Sir, it can be made anywhere.' I said, 'Not anymore.' So I put a little clause in the bottom: The pipe has to be made in the United States of America if we're going to have pipelines."

The crowd exploded into cheers. Trump didn't mention that the government actually has no legal authority to demand that a private company use domestic materials in a project that's privately financed. Instead, he marveled at the crowd size and then told another story.

"They were close to signing a $4.2 billion deal to have a new Air Force One. Can you believe this?" said Trump, later clarifying that the contract covers the cost of two planes. "I said, 'No way.' I said, 'I refuse to fly in a $4.2 billion airplane. I refuse.' So I got Boeing in . . . We got that price down by over $1 billion. And I probably haven't spoken, to be honest with you, for more than an hour on the project."

While Boeing's chief executive has promised to get the job done for "less" than the original price, the $1 billion figure was new. Either way, the story earned the president another round of cheers.

The president had pitched this speech as being one about unity, a theme that didn't seem to come up until his final seconds on stage.

"Let us move past the differences of party and find a new loyalty rooted deeply in our country," Trump said, reading from a teleprompter. "We are all brothers and all sisters. We share one home, one destiny and one glorious American flag. We're united together by history and by providence. We will make America strong again, I promise. We will make America proud again."

The crowd cut him off with cheers.

The rally was over, and the sound of the Rolling Stones's "You Can't Always Get What You Want" filled the hangar. Soon, Trump was back on Air Force One, which taxied away to the "Air Force One" theme song, as spotlights bounced around the hangar as if it were a nightclub.

As the president left, there was a mob of reporters around Huber, the president's new star. Minutes later, he was getting ready for a live interview on CNN, as a crowd of fellow supporters gathered behind him and chanted: "CNN sucks!" and "Tell the truth!"

Promoted
Listen to the latest songs, only on JioSaavn.com
One of Huber's friends, Kevin Rebal, stood behind the cameras and shouted at him: "Gene, you're on very fake news! It's OK, man. It's OK."