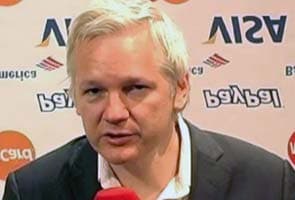 Sydney: WikiLeaks founder Julian Assange will run for a seat in the Australian Senate during this year's elections, his organisation announced on Wednesday, with his mother saying he would be "awesome" in the role.

WikiLeaks unveiled the plan with a tweet that read "Australia: Julian Assange has confirmed he will run in the 2013 national election for the Australian Senate", just hours after Prime Minister Julia Gillard said the nation would go to the polls on September 14.

"So it will be great to 'Assange' the Senate for some Aussie oversight," she was quoted as saying by the Australian Associated Press.

Assange, who announced his intention to stand for Senate last year, has been holed up in the Ecuadoran embassy in London since June, after claiming asylum in a bid to avoid extradition to Sweden, where he faces allegations of sex crimes.

Britain has refused to grant him safe passage out of the country.

The former computer hacker fears Sweden will allow him to be extradited to the United States to be questioned over the WikiLeaks release of thousands of US diplomatic cables.

Assange said last year that he was planning to register a WikiLeaks party with the Australian Electoral Commission, The Age newspaper reported at the time.

To do so he would require the support of 500 eligible voters, the paper said, adding that if he were elected while still out of the country a nominee would occupy the Senate seat.

It was unclear whether being elected a senator would have any bearing on his status in Britain and whether London would allow him to leave the country of his own accord.

Despite the allegations against him Assange remains a popular figure in Australia.

WikiLeaks enraged the United States in 2010 by publishing hundreds of thousands of classified documents on the wars in Iraq and Afghanistan, as well as a huge cache of US diplomatic cables that embarrassed governments worldwide.

Last week Assange hit out at a Hollywood film about the whistleblowing website, branding it a "massive propaganda attack".

Promoted
Listen to the latest songs, only on JioSaavn.com
He told Oxford University by videolink that he had acquired a copy of the script for "The Fifth Estate", currently being filmed, blasting it as "lie after lie".