In Another Attempt, US Judge Blocks Trump's Immigration Ban 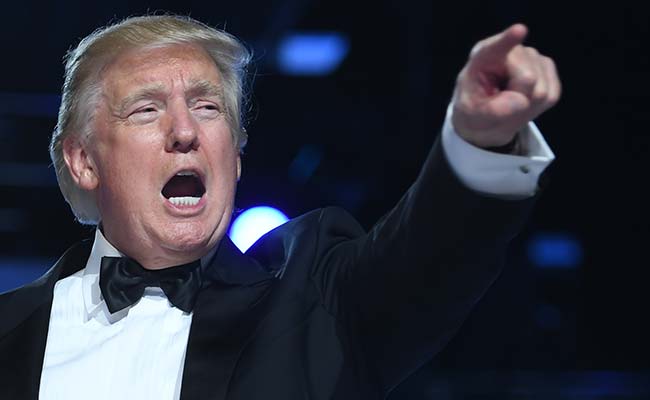 Since it was first rolled out a week ago, Donald Trump's travel ban has been evolving (AFP Photo)

A federal judge in Washington state declared Friday that he would temporarily block enforcement of President Donald Trump's controversial ban on entry to the United States, and government authorities immediately began taking steps that would allow those previously affected to travel, according to a U.S. official familiar with the matter.

The ruling from Judge James Robart was broader than similar ones before it, and it prompted officials to immediately communicate with airlines. At the same time, though, the White House said in a statement the Justice Department would "at the earliest possible time" file for an emergency stay of the "outrageous" ruling from the judge. Minutes later, it issued a similar statement removing the word "outrageous."

"The president's order is intended to protect the homeland and he has the constitutional authority and responsibility to protect the American people," the White House said.

The judge's ruling set up a high-stakes legal confrontation between the new president and the judicial branch over his temporary ban on refugees and citizens from seven Muslim-majority countries. In his opinion, Robert wrote that "fundamental" to the court's work was "a vigilant recognition that it is but one of three equal branches of our federal government."

"The court concludes that the circumstances brought before it today are such that it must intervene to fulfill its constitutional role in our tripart government," he wrote.

Robart granted a request from lawyers for the state of Washington who had asked him to stop the government from acting on the critical sections of Trump's order. Justice and State department officials had revealed earlier Friday that about 60,000 - and possibly as many as 100,000 - visas already have been provisionally revoked as a result of Trump's order. A U.S. official said, because of the court case, officials would examine the revoking of those visas so that people would be allowed to travel.

Washington Attorney General Bob Ferguson hailed the case as "the first of its kind" and declared that it "shuts down the executive order immediately." Robart, a judge appointed by George W. Bush, said in written order that U.S. officials should stop enforcing the key aspects of the ban: the halting of entry by refugees and citizens from certain countries. He did not specifically address the matter of those whose visas already had been revoked.

The Justice Department said in a statement that it was "reviewing the court's order and will determine next steps." A State Department official said the agency was "working closely with the Department of Homeland Security and our legal teams to determine how this affects our operations."

"We will announce any changes affecting travelers to the United States as soon as that information is available," the official said.

Immigration lawyers said Friday night they were still assessing the Washington case, though they were heartened by it.

"The order makes it clear that all of the main provisions of the executive order cannot be enforced at this time," said Lee Gelernt, deputy director of the American Civil Liberties Union's Immigrants' Rights Project. "That means that a lot will have to change immediately, and the government will have to make clear how they intend to follow the order with respect to all of the ways in which immigrants here and abroad are being affected at the moment."

Since it was first rolled out a week ago, Trump's travel ban has been evolving - both because of legal challenges and as a result of decisions by the administration to walk back aspects of it. Green-card holders from the affected countries, for example, no longer need waivers to get into the United States, as they did when the order took effect. And the Department of Homeland Security asserted Friday that the order does not apply to dual citizens with passports from countries other than the seven listed.

The numbers of visas revoked, too, demonstrated the far-reaching impact of the order. Families have been split, students unable to pursue their education, and those in the United States unable to leave for fear of not being able to return - and not by the handful, but by the tens of thousands.

During a hearing in a lawsuit by two Yemeni brothers who arrived at Dulles International Airport last Saturday and were quickly put on a return flight to Ethiopia because of the new restrictions, a Justice Department lawyer said 100,000 visas had been revoked.

The figure, though, was immediately disputed by the State Department, which said the number of visas revoked was roughly 60,000. A spokeswoman said earlier Friday the revocations have no impact on the legal status of people already in the United States, but if those people leave the United States, their visas would no longer be valid.

About the same time, in Boston, a group of four students enrolled in area colleges, a researcher and the spouse of a permanent resident - all of whom came from countries affected by the ban - flew into the United States.

The group that entered was aboard the same flight from Frankfurt operated by the German airline Lufthansa, which a day earlier had noted on its website a court decision that it claimed had "suspended" Trump's decree on flights to Boston. Lawyers hailed the development as good news.

"We've got six more today than we had yesterday," said Susan Church, an attorney for the American Immigration Lawyers Association of New England.

Among those who made their way back to the United States were two undergraduate Massachusetts Institute of Technology students who had been visiting their families for winter break; as well as 27-year-old Behnam Partopour, a PhD student from Iran studying chemical engineering at Worcester Polytechnic Institute who had been working on a project in Germany; and Samira Asgari, an Iranian scientist who was headed to Boston to conduct research at Brigham and Women's Hospital.

Colleen Wamback of Worcester Polytechnic Institute said Partopour had a student visa which was issued before the executive order but was delayed in getting to him. Asgari, on the other hand, had tried twice to board flights to the United States but was turned away because of the ban. She had filed a lawsuit over the matter.

Though federal judges in other parts of the country already had restrained enforcement of the ban, U.S. District Judge Allison Burroughs's decision in Boston went somewhat further - blocking U.S. officials from detaining or removing those who, "absent the executive order, would be legally authorized to enter the United States." Burroughs also ordered that her ruling be communicated to airlines.

On Thursday, the airline Lufthansa had posted on its website night a vague notice that Trump's executive order was "suspended" on flights to Boston, citing the court's decision there. Officials with the ACLU hailed the posting, declaring on Twitter that Lufthansa was "now boarding travelers from the seven banned countries" in accordance with the order of the federal court in Massachusetts.

The airline, though, said that only those with "valid travel documents" would be eligible to board. On Jan. 27, the State Department had provisionally revoked all valid nonimmigrant and immigrant visas of nationals of Iraq, Iran, Libya, Somalia, Sudan, Syria and Yemen. In a letter, Edward Ramotowski, State Department deputy assistant secretary for the Bureau of Consular Affairs, said that the revocation would not apply to "any visa exempted on the basis of a determination made by the secretaries of State and Homeland Security" and that those exemptions would be determined "on a case-by-case basis, and when in the national interest."

Lufthansa later removed the language about the executive order being suspended. Then, on Friday, another federal judge ruled that his colleague's order should be allowed to expire, as it had been set to do, on Sunday. U.S. District Judge Nathaniel Gorton declared that those suing had "not demonstrated that they are likely to succeed on the merits of any of their claims."

Christina Semmel, a spokeswoman for Lufthansa, declined to comment on when the airline began allowing travel to Boston. She said Lufthansa was simply following guidance it and other carriers had received from U.S. Customs and Border Protection officials.

Church, with the American Immigration Lawyers Association of New England, said she knew of no official exemption for the passengers who made it to Boston.

"We're telling everyone to try to get to Frankfurt or Munich, because they are letting them on the planes there," she said, before a judge ruled the court order there would expire.

U.S. Rep. Jim McGovern, D-Mass., who had been in touch with lawyers and U.S. officials and was at the airport to greet those arriving, said he did not know if others might be able to get in through Boston.

"Look, this is an awful executive order to begin with, but what made it even worse, was no one even knew what the hell it did," McGovern said. "I feel ashamed that good people had to go through this awful process. It's just shameful. I'm embarrassed by it all."

Federal judges in New York, California, Massachusetts and Virginia had already issued rulings temporarily blocking aspects of the Trump order - though the orders all seemed to be limited to people who had made their way to U.S. airports, or, in Virginia's case, to certain people.

The New York and Massachusetts rulings both blocked the government from detaining or deporting anyone from the seven affected countries who could legally enter the U.S., and the Massachusetts ruling added the critical phrase "absent the executive order." In California, a judge declared that U.S. officials were also prevented from "blocking" people from entering who had a valid visa.

Washington and Minnesota had filed a broad legal challenge to the order, alleging it was "separating families, harming thousands of the States' residents, damaging the States' economies, hurting State-based companies, and undermining both States' sovereign interest in remaining a welcoming place for immigrants and refugees." Jeffrey Bezos, the owner of The Washington Post and a Washington state resident, has spoken out against the ban.

Promoted
Listen to the latest songs, only on JioSaavn.com
With its suit ongoing, Washington state asked a federal judge there to block the order immediately, on a temporary basis. The Justice Department responded that the president had broad power to set immigration authority and that the states were unlikely to succeed in their challenge.