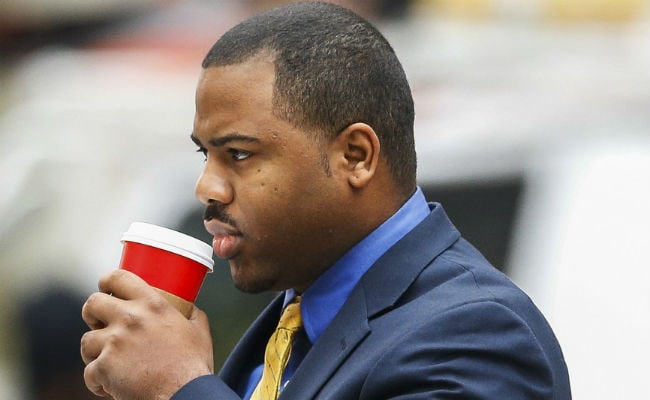 Baltimore: The manslaughter trial of a Baltimore policeman accused over the death in custody of African-American Freddie Gray was declared a mistrial Wednesday after the jury failed to reach a verdict, putting the city on edge.

Police were out in force in parts of the gritty East Coast city in a bid to avoid a repeat of the riots and looting that erupted after the death in April of the 25-year-old Gray, the latest in a series of high-profile cases of perceived police brutality in the United States.

William Porter was the first of six police officers to stand trial over the death of Gray, who suffered a snapped spine while being transported unrestrained in the rear of a Baltimore police van.

Judge Barry Williams declared a mistrial -- something which is rare in US courts -- after the jury of five men and seven women was hung following two days of deliberations.

It is now up to prosecutors whether Porter should be retried with another jury at a later date.

Amy Dillard, a Baltimore law professor, told AFP: "I presume there will be another trial."

Scuffles broke out outside the courthouse after the judge made his announcement, as police helicopters circled overhead.

Porter, who is black, had been charged with involuntary manslaughter, reckless endangerment and assault on Gray, who was picked up after fleeing at the sight of police.

Mayor Stephanie Rawlings-Blake called for calm, as night closed in on Baltimore, a city of 620,000 that has among the highest murder rates in the United States.

"All of us, if we believe in justice, must have respect for the outcome of the judicial process," Rawlings-Blake told reporters, warning that police would not hesitate to clamp down on violent demonstrators.

"We cannot -- and will not -- be defined by the unrest of last spring."

Arrested and charged with possession of a knife, Gray was loaded onto the police van with his hands and feet shackled. When police later checked on him, he was in a coma with a severed spine, investigators found.

He died of his injuries several days later, sparking protests, looting and arson, and more intense debate about police use of deadly force, particularly in its dealing with black men or youths.

The Baltimore city prosecutor filed charges against six officers -- three white and three black -- in connection with his death. All six have entered not guilty pleas.

Lawyers for the accused call Gray's death a tragic accident possibly caused when the police van braked suddenly. They also have suggested that he might have deliberately injured himself.

With the streets of Baltimore -- which is about an hour from the capital Washington -- tense, Police Commissioner Kevin Davis warned that protests must be kept peaceful.

"Protesters who were lawfully assembled again will find our police department respects them and we'll do everything we can to afford them the ability to protest in this city," he said, standing alongside the mayor.

"Folks who choose to commit crimes and hurt people and break things and harm people are no longer protesters.

"You lose your ability to call yourself a protester when you choose to harm people and destroy property."

Davis said that police were scouring social media for signs that anyone was inciting trouble.

Gray's death -- the van he died in was akin to a coffin on wheels, the court heard earlier this week -- ramped up already searing discontent after several similar deaths at the hands of police in the United States.