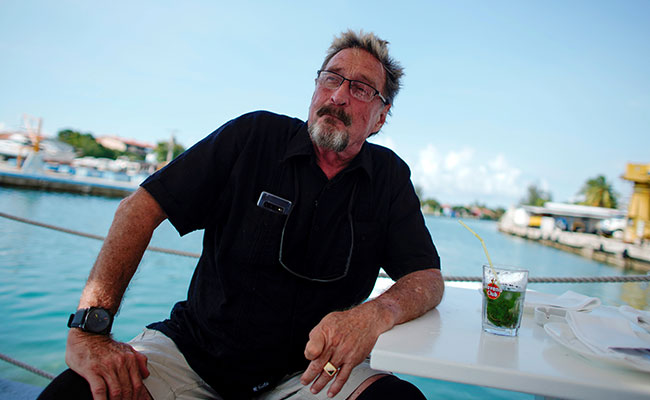 John McAfee's widow blamed US authorities for his death.

The widow of US software mogul John McAfee blamed US authorities on Friday for his death in a Spanish prison where he was awaiting extradition to the United States and said he was not suicidal.

Janice McAfee said she wanted a thorough investigation into the circumstances of the death of the 75-year-old, which happened in his prison cell on Wednesday in what the authorities said was an apparent suicide by hanging.

Dressed in black and wearing dark sunglasses, she told reporters outside the Barcelona-area Brians 2 jail, where her husband had been held since October, that she had last spoken to him a few hours before he was found dead.

"His last words to me were 'I love you and I will call you in the evening', those words are not words of someone who is suicidal," she said, holding back tears.

"I blame the US authorities for this tragedy. Because of these politically motivated charges against him, my husband is now dead," she said, adding that he planned to appeal against Spain's high court ruling, published a few hours before his death, that authorised his extradition on tax evasion charges.

A U.S. embassy spokesperson said: "We are closely monitoring local authorities' investigation into the cause of death, and stand ready to provide all appropriate assistance to the family. Out of respect to the family during this difficult time, we have no further comment."

British-born McAfee, who launched the world's first commercial anti-virus in 1987, was detained last October at the Barcelona airport. He had lived for years on the run from U.S. authorities, some of that time aboard a megayacht.

He was indicted in Tennessee on tax evasion charges and was charged in a cryptocurrency fraud case in New York.

Calling her husband a fighter who "had hope things would work out", Janice McAfee added: "I don't believe he did this, I will get answers."

McAfee's lawyer, Javier Villalba, said the family was awaiting the results of an official autopsy, but he would request a second, independent autopsy as instructed by the McAfee family, who he said could take legal action once the investigation into the death was concluded.

McAfee was sharing his cell with another inmate but was alone when he died, a jail source said.

Catalonia's Justice Department has opened an internal investigation into the death.

The suicide rate in Spanish jails was placed in the "very high" category in a 2020 Council of Europe report, meaning it was more than 25% higher than the European median value. In 2019, there were 8.4 suicides for every 10,000 inmates in Spain.