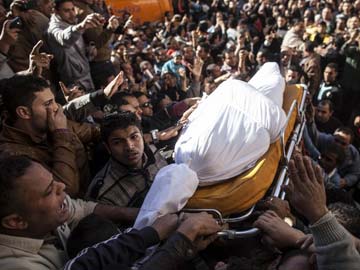 Egyptians carry the body of one of the thirteen people killed in a car bomb attack earlier in the day, during his funeral in the Egyptian city of Mansura, North of Cairo, on December 24, 2013.

Cairo: An Al-Qaeda-inspired group based in Egypt's Sinai on Wednesday claimed responsibility for a suicide car bombing of a police headquarters north of Cairo that killed 15 people, the deadliest such attack since president Mohamed Morsi's overthrow.

"Your brothers in Ansar Beit Al-Maqdis, with the grace of God, were able to target the Daqhaleya police headquarters," the group said of Tuesday's attack, in a statement posted on Islamist forums.

It said the attack was carried out by a suicide bomber identified as "Abu Maryam".

The group, whose name in English means "Partisans of Jerusalem," had previously claimed credit for bombings in Sinai and the attempted assassination by a suicide car bomber of interior minister Mohamed Ibrahim in Cairo in September.

The group warned soldiers and policemen to abandon their posts "to preserve their religion and lives".

Promoted
Listen to the latest songs, only on JioSaavn.com
It said it carried out Tuesday's attack in response to the "apostate regime's war on Islamic sharia, it's shedding of Muslim blood and violation of our women's and sisters' honour."

Attacks by the group have intensified since the military ousted Islamist president Morsi on July 3.