Japan in Urgent Search for Missing After Deadly Floods 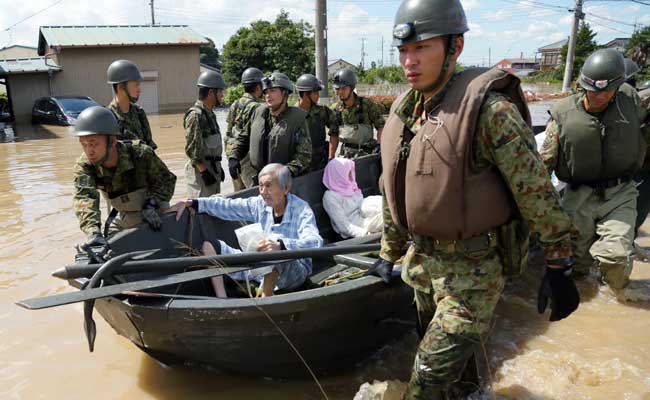 Elderly patients are transported in a boat by the Self Defense Force after they were evacuated from a hospital in Joso in Ibaraki prefecture on September 11, 2015. (AFP Photo)

The heaviest rain in decades pounded the country in the wake of Typhoon Etau, which smashed through Japan this week, leaving a trail of destruction in its wake.

Hundreds of thousands were ordered to leave their homes and at least 22 people -- including a pair of eight-year-old children -- were still unaccounted for on Friday evening in disaster-struck Joso city, which lies about 60 kilometres (37 miles) outside Tokyo. Another person was missing in a northern prefecture.

Ryosei Akazawa, a member of Prime Minister Shinzo Abe's cabinet, acknowledged that emergency personnel still do not know the whereabouts of the missing, as fears grow that the death toll will rise.

"We are in a situation where we have yet to confirm where these missing people are, " said Akazawa, the Cabinet Office's state minister, after visting the devastated area.

Parts of Joso, a community of 65,000 residents, were destroyed Thursday when a levee on the Kinugawa river gave way, flooding an area that reportedly spans 32 square kilometres (12 square miles) and includes 6,500 homes.

Desperate Joso residents waved towels as they stood on balconies trying to summon help, while military dinghies ferried dozens of people to safety, and helicopters plucked individuals from rooftops.

Hundreds of people are believed to still be trapped in buildings, while more than 600 had been rescued in Ibaraki prefecture, where Joso is located, by Friday evening.

Some frightened Joso residents took to social media on their smartphones to beg for help as the muddy brown waves swirled around their doomed houses, while trees were uprooted and cars bobbed in the dirty water.

"I don't know what to do as my house has been inundated," 23-year-old nurse Kentaro Sato told Kyodo News.

One woman said she was anxiously awaiting details about her family at an emergency shelter, after leaving her husband and children to go shopping Thursday morning. She was unable to return home due to the flooding.

"I have been here since yesterday morning... and I do not have any news about my family," said the woman in her 60s who gave her last name as Furuya.

The government started drainage operations at the swollen river while repair work on its dykes were reportedly expected to take about a week.

"I still feel the trauma" from the tsunami, a woman told public broadcaster NHK from a shelter in Minami Soma, one of the areas hit by the 2011 disaster that also triggered reactor meltdowns at the Fukushima nuclear plant.

"I was ready to run away as soon as the evacuation order was issued."

Some 5,800 troops, police and firefighters have been dispatched to flooded areas where rescuers continued to work through the night.

People were seen wading through waist-high water to reach evacuation shelters, where thousands are staying across affected regions.

Another river in Miyagi prefecture, north of Ibaraki, burst its banks and flooded a populated area but many residents had already been evacuated, reports said.

Police said the third victim was a 25-year-old man helping to clear clogged drains in the city of Nikko, which is known for its historic shrines.

The heavy rains also affected those who are still in temporary shelters following the 2011 tsunami.

Flooding further complicated a contaminated water problem at the crippled Fukushima plant, where the site's drainage pumps were overwhelmed, sending radiation-tainted water into the ocean.

As the rain let up on Friday, pumps were no longer overwhelmed, acording to the site's operator.

Automaker Toyota temporarily shut three production plants in affected areas Friday, but said they would reopen later in the day.

Japan is no stranger to natural disasters, and is frequently rocked by typhoons.

However, nothing in recent memory has compared with the tsunami of 2011, when more than 18,000 people were killed.