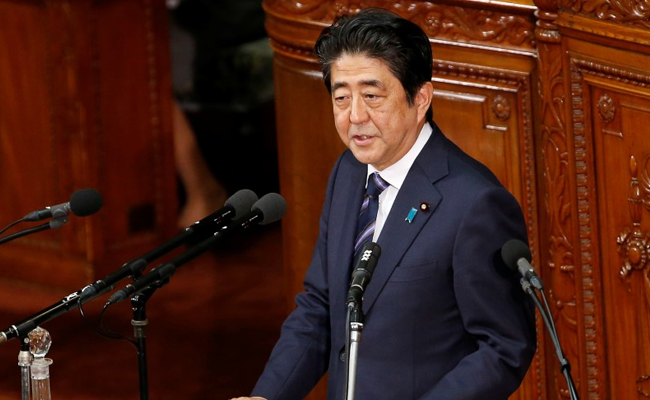 Shinzo Abe said that immigration-shy Japan would accept up to 150 Syrian students over 5 years from 2017.

Tokyo: A Japanese programme aimed at accepting a small number of refugees from war-torn Syria promised Wednesday to remove language from documents which implied that pregnant women are not welcome to apply.

Prime Minister Shinzo Abe announced in May that immigration-shy Japan, with a population of about 127 million, would accept up to 150 Syrian students over five years from 2017.

That number compares with vastly higher figures in other countries. Norway, with a population of about 5.1 million, has pledged to accept some 9,000 Syrians.

Abe separately pledged at a refugee summit hosted by US President Barack Obama in September that Japan was also prepared to "warmly welcome" family members of the students.

But the Japanese unit of c has raised concerns that the programme for Syrians virtually excluded pregnant women.

As advertised, the programme -- entitled "Japanese Initiative for the future of Syrian Refugees" -- has several requirements for applicants.

Originally, it included the line: "Pregnant applicants are not recommended to apply," according to Amnesty and the government's Japan International Cooperation Agency (JICA), which manages the programme.

But after Amnesty and other groups expressed concern, it was changed to read: "Before the application, pregnant applicants are advised to consider carefully potential risk of health and life issues of mother and foetus."

JICA spokesman Satoshi Murakami, however, said late Wednesday that the organisation would remove the clause as it was creating "misunderstanding".

He had earlier in the day told AFP the programme's main focus was "not to rescue the underprivileged but to educate personnel" for Syria's reconstruction.

"When a pregnant woman comes to Japan and gives birth, she will have to rest for some time," he said, though stressing that the programme was not meant to exclude expectant women.

Amnesty International had objected to that stance.

"The requirement is problematic because it narrows the window for female applicants," said Kaoru Yamaguchi, who added that it discourages refugees from applying.

In March British charity Oxfam assessed Japan should take in some 50,000 Syrians based on the size of its economy.

Promoted
Listen to the latest songs, only on JioSaavn.com
Last year it accepted 27 refugees, including three Syrians, after some 7,500 people from 69 countries sought such status in Japan, according to the justice ministry.