The James Webb Telescope has captured a stunning 'deep field' image which showcases a cluster of billion year old galaxies. 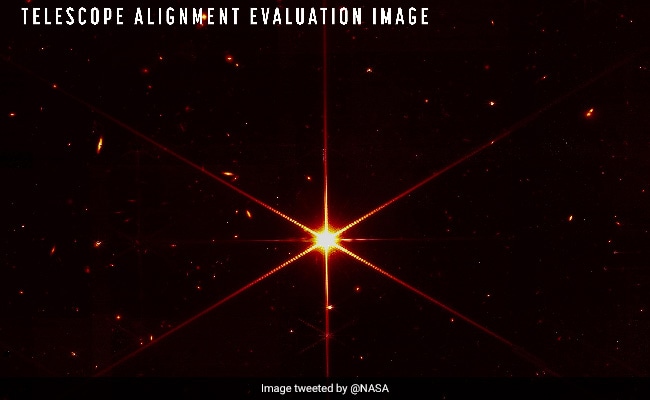 The James Webb Telescope has captured a stunning image of a cluster of billion year old galaxies.

The James Webb Telescope recently beamed its first official photo of deep space to NASA officials, which shows why the $10 billion machine is touted to be the next big thing after Hubble. The photo of HD 84406 was posted by NASA on its official Twitter account.

The stars are aligning...so to speak. ⭐

Our @NASAWebb team has fully aligned the telescope's primary imager with its mirrors, keeping its optics on track to meet or exceed science goals. Tune in at noon ET (16:00 UTC) for an update: https://t.co/F638lywmKI#UnfoldTheUniversepic.twitter.com/FDTQVlNDUC

It was taken after a major alignment of its mirrors - called 'fine phasing' - was completed. Explaining the process, NASA scientists said it involves fine-tuning the incline and placement of 18 hexagonal mirrors, which requires nanometre-scale precision.

Now that a major step has been fulfilled, NASA will move towards the next phase before making the most complex and most expensive observatory fully operational.

HD 84406, a star in the Milky Way Galaxy, appears more than just a shiny bright focus in the photo taken by the telescope. According to NASA, the star was chosen not for any scientific significance but only for its brightness and location.

What makes this image not just beautiful but scientifically significant is the tiny specks that can be seen all over the image, behind the amber-coloured streaks. Those tiny specks are actually age distant galaxies. This is referred to as a 'deep field'.

Jane Rigby, who serves as the Operations Project Scientist for the James Webb Space Telescope, said in a press conference, "This is going to be the future from now on. Wherever we look, it's a deep field. Without even really breaking a sweat, we're seeing back in time to galaxies that we're seeing the light as it looked billions of years ago."

The star is located 1.6 million kilometres away from Earth.

Once all the gear of the James Webb Telescope is deployed, scientists are predicting that they will be able to see some of the first stars that sprung up after the Big Bang.