"It's Your Country": Taliban Stops At Border Afghans Trying To Flee To Pak

"Every day, 8,000 to 9,000 people try to cross the border without having the necessary papers, and are turned back," a Taliban border guard said. 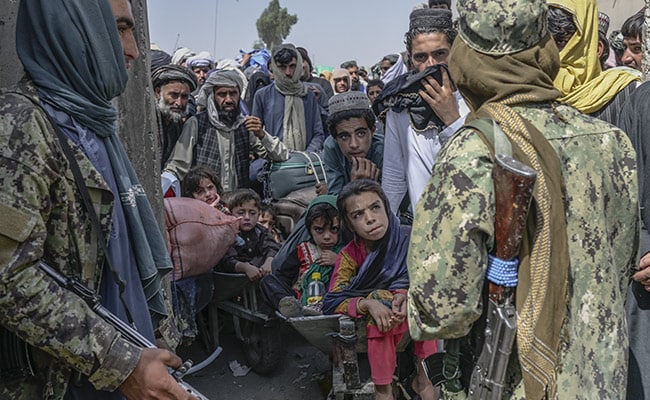 Scores of Afghans are eager to leave a country on the verge of economic collapse. AFP

Thousands of Afghans trying to escape the misery at home have flocked to their country's southern border with Pakistan, but their attempts to get across have been stopped by the Taliban.

Zakariullah, sitting on a dirt road in the trading town of Spin Boldak only a few hundred metres from Pakistan, says he has been turned back more than half a dozen times, sometimes violently.

"They say only people from the area with papers," Zakariullah, a 25-year-old farmer and father of three, told AFP on the weekend.

"We want to cross the border to work there because there are no jobs here."

"They tell people 'It's your country. You should not leave'," said 25-year-old Rahmadin Wardak, who was also trying to flee.

On the other side, their Pakistani counterparts in Chaman were also stopping those attempting to cross.

"Every day, 8,000 to 9,000 people try to cross the border without having the necessary papers, and are turned back," one Taliban border guard, Mullah Maulvi Haqyar, told AFP.

Maulvi Noor Mohammad Saeed, a Taliban official in Kandahar province, confirmed the authorities were asking "people and families to not leave the country".

"Doing that, you lose respect for your Afghan culture," he told AFP.

At the border, only day labourers and traders -- all young men wearing traditional flat pakol hats and sweating under the weight of their goods -- were allowed to cram into a narrow corridor topped with barbed wire that led to the next checkpoint.

A second corridor for other travellers lay mostly empty, with a few exceptions including elderly men and women loaded onto wheelbarrows seeking urgent healthcare in Pakistan.

But scores of Afghans are eager to leave a country on the verge of economic collapse since the Islamists seized power in mid-August and foreign aid money dried up.

Jobs have vanished while farmers are struggling with the impact of a drought.

The United Nations has warned a third of the population is facing the threat of famine.

Zakariullah, whose farmland was 600 kilometres in Kabul province, said he now hoped to find work in Pakistan. He would then send for his wife and children to join him.

But, like many others at the border crossing, the journey to Spin Boldak has stripped away his meagre savings.

Mohammed Arif said he left his home in Nangarhar in the east because he had "no money, no food to feed my eight children".

Commotion erupted outside the border office as hundreds pleaded with the Taliban to let them through, during a visit by AFP on the weekend.

Guards wielding sticks and pipes tried to control the frenzied scene as a crush of people pushed to get across to sell their possessions -- and keep hunger at bay for a few more hours.

None of them made it.

Before the Covid pandemic and recent upheavals, the border was mostly open, with few restrictions for the tens of thousands who crossed daily.

But when the Taliban seized Spin Boldak early on in their dizzying offensive, Pakistan shut the gates and left huge crowds of stranded travellers to amass on both sides.

The crossing reopened when the hardline group ousted the US-backed government and assumed power in mid-August.

More Afghans arrived, fearing the Taliban would return to their brutal rule in the 1990s.

"At first, lots of people could cross," said Sami Ul Haq, who monitors the crossing point for the UN refugee agency UNHCR. "Before we had up to 24,000 people coming a day."

There were few restrictions at the crossing during the last two weeks of August, but then the Taliban and Pakistanis clamped down.

And on Thursday, the Taliban said they were shuttering the gates completely in protest against Pakistan -- which has repeatedly said it would not accept Afghan refugees -- accusing officials of creating hurdles for Afghans with the right papers.

The UNHCR has meanwhile not reported huge movements of people towards the borders.

With the war over, some Afghan refugees living in Pakistan have even returned.

But the agency last month said it was preparing contingency plans for up to 500,000 rushing into neighbouring countries by the end of the year.

"We need to prepare in case any change inside the country could trigger a massive displacement," Bertrand Blanc, a UNHCR senior emergency officer, told AFP in Islamabad.

"For the moment, we are in a wait and see situation."