It's a bug's life: microbes to inherit the Earth 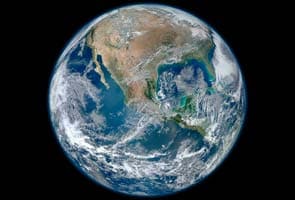 Paris: Two billion years from now, an ever-hotter Sun will have cooked the Earth, leaving microbes confined to pockets of water in mountains or caves as the last survivors, a study said on Monday. The bleak scenario is proposed by astrobiologist Jack O'Malley-James of the University of St Andrews, Edinburgh.

As the Sun ages over the next billion years, it will become more luminous, cranking up the thermostat on the Earth, O'Malley-James suggests in a computer model presented at a meeting of Britain's Royal Astronomical Society (RAS).

Increased evaporation rates and chemical reactions with rainwater will cause a dramatic fall in levels of atmospheric carbon dioxide (CO2), on which plants depend for photosynthesis. Animals, in turn, depend on plants. Over the second billion years, the oceans will dry up completely, leaving extremophiles -- microbial life able to cope with intense ultra-violet radiation and raging heat from the Sun -- to inherit the planet.

"The far-future Earth will be very hostile to life by this point," O'Malley-James said in an RAS press release. "All living things require liquid water, so any remaining life will be restricted to pockets of liquid water, perhaps at cooler, higher altitudes or in caves or underground." But 2.8 billion years hence, even these hardy holdouts will have followed the dodo, according to his model.

Promoted
Listen to the latest songs, only on JioSaavn.com
The finding could help hunters of exoplanets, who dream of finding an Earth-like planet in another solar system. A dying planet would have a telltale nitrogen atmosphere where there would be only traces of methane pointing to residual bacterial life.