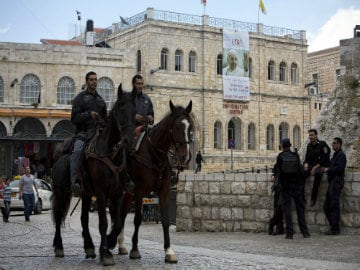 Israeli police officers patrol near the Christian Information Centre building that is adorned with a poster welcoming Pope Francis to Jerusalem, in Jerusalem's Old City, Tuesday, May 13, 2014.

Police spokesman Micky Rosenfeld said a "number of right-wing activists" have been restrained for their intention to carry out "provocative and illegal acts" during the three-day visit to the Holy Land. The order restricts them from Jerusalem's Old City, where Francis will visit, and orders them to stay away from the pope, Rosenfeld said.

In recent weeks, vandals have scribbled anti-Arab and anti-Christian graffiti on Christian holy sites and properties, including a Roman Catholic visitor's center outside the Old City.

In addition to churches and monasteries, vandals have also targeted mosques, dovish Israeli groups and even Israeli military bases.

A tiny fringe group of radical Israeli settlers are believed to be behind the spate of attacks meant to protest what they perceive as the Israeli government's pro-Palestinian policies and in retaliation for Palestinian attacks.

The pope is set to visit Jordan, the West Bank and Israel during a three-day visit beginning Saturday.