300 Rockets Fired At Israel After Its Botched Op In Gaza, It Retaliates 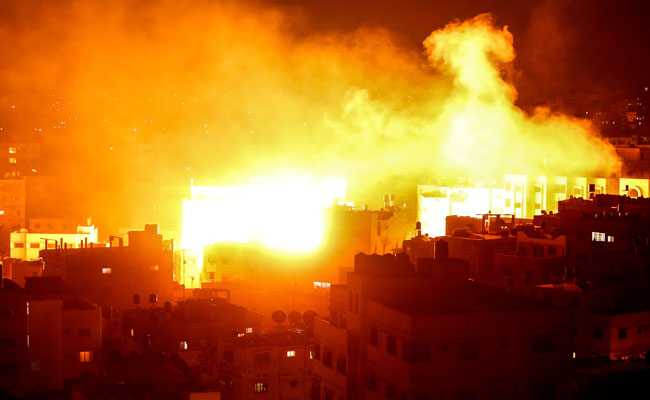 Thick plumes of smoke were rising above Gaza and southern Israel. (AFP)

A new round of hostilities triggered by a botched Israeli covert operation in the Gaza Strip pushed the territory's fragile security situation to the brink on Monday, as Palestinian militants launched hundreds of rockets toward Israel and Israeli jets carried out bombing raids.

Israel's military said it had rushed extra infantry troops and air defenses to the border with Gaza as at least 300 projectiles were launched toward Israeli territory on Monday. Several rockets hit residential buildings, while an antitank missile struck a bus transporting soldiers, the military said, critically injuring a 19-year-old.

Although violence in Gaza has flared sporadically in recent months, Monday's exchange reached a new pitch. The Israeli military struck 70 targets in Gaza, signaling a campaign with wider scope than other recent bombing raids.

The headquarters of al-Aqsa TV, run by the Islamist militant group Hamas, was among the targets, with the Israeli military describing it as a "strategic terror target." Hamas, which controls Gaza, said its main internal security building in central Gaza City also was struck.

The Palestinian Health Ministry in Gaza said three people were killed and at least two injured in the air raids. Islamic Jihad, another militant group in Gaza, said two of those killed were its fighters.

As international mediators worked to broker a cease-fire, neither side showed any sign of backing down. After the strike on the television station, Palestinian factions said they would extend the range of their rockets.

Maj. Gen. Kamil Abu Rukun, coordinator of Israeli government activities in the Palestinian territories, said that Hamas had crossed a "red line" and that the military would "dial up" its response.

He told residents of Gaza to "look carefully" at the pictures from the 2014 war in the territory. "A picture is worth a thousand words," he said.

Militant factions in Gaza vowed to retaliate for Israel's "aggressive crime" after seven Palestinian extremists, including a Hamas commander, were killed Sunday night as a group of Israeli special forces carried out an operation inside Gaza. One senior Israeli officer also was killed. Armed factions in Gaza began firing rockets in response at communities across the border, which they vowed would "remain unlivable" as long as Israel persists with such actions.

The violence threatened to derail stuttering efforts in recent months to forge a cease-fire between Israel and Hamas, a process that has been brokered by Egypt, the United Nations and Qatar. Israel and Hamas have fought three wars in 10 years, with flare-ups becoming increasingly frequent in recent months as Hamas has urged residents to protest at the fence along the border with Israel.

The prospects for progress appeared to brighten this weekend after Israel permitted $15 million in cash from Qatar to be transported to Gaza in suitcases to pay long-delayed salaries of the civil servants in the Hamas government and ease the suffering of the territory's 2 million residents as a way to reduce tension.

But by Monday, thick plumes of smoke were rising above Gaza and southern Israel. Warning sirens blared in communities on the Israeli side, with residents told to stay in bomb shelters. Israeli television showed images of a supermarket on fire, with media reporting that at least 12 people were injured in Monday's rocket fire.

Residents near the television offices in central Gaza said they had evacuated when a warning missile struck the building. The Israeli military justified the attack by saying that the channel broadcasts "violent propaganda" against Israel and provides instructions on how to carry out attacks.

Hamas spokesman Fawzi Barhoum described it as a "blatant aggression against journalism" and called on international bodies to denounce the strike.

Militant factions in Gaza described the targeting of the bus near the border as a "heroic operation" in response to the "treacherous Zionist crime" a day earlier.

The Israeli military remained tight-lipped about the incident but said a covert operation had been underway at least 2 miles inside the Gaza Strip when the unit's presence was somehow exposed. An exchange of fire between the troops and Palestinian fighters ensued, turning deadly and leading to the Israeli unit's call for backup from the air.

Lt. Gen. Gadi Eisenkot, chief of the general staff of the Israel Defense Forces, said the team was involved in a "very meaningful operation for Israel's security."

Israeli Prime Minister Benjamin Netanyahu cut short his trip to Paris on Sunday night when news broke that the operation had gone awry.

A statement from the Izzedine al-Qassam Brigades, Hamas's military wing, said the Israeli team was two miles inside Gaza in a civilian car when the fight broke out.

Residents in the area, east of the town of Khan Younis, said a group of Hamas fighters stopped the vehicle carrying the Israelis to check their identities. It was then that the Israeli unit shot Nour Baraka, a local Hamas leader, and another militant dead, they said.

The Hamas statement said Baraka was "assassinated." It said the unit was "dealt with by our fighters."

Residents said the Israeli vehicle sped off with two Hamas cars in pursuit. Israeli airstrikes killed the five other militants, they said

Conricus said the operation, "like many others similar to it," was part of an ongoing effort against "different terrorist organizations." He said that its mission was not to kill or kidnap.

The Israeli army did not release the identity of the dead soldier. Speaking on Israeli Army Radio, military spokesman Ronen Manelis said the soldier, despite being injured, had been instrumental in ensuring the safe return of the undercover unit. One other soldier was moderately injured, officials said.

On Sunday, tens of thousands of public servants lined up at post offices across the Gaza Strip to finally receive their salaries.

"I don't care about the source of this money," said Mohammed Sultan, 42, a teacher who has not received a full salary for many years.

Basem Naim, a Hamas official, had said that the understanding was that Israel would allow Qatari funds into the Gaza Strip, humanitarian projects by international institutions and an extension of Gaza's permitted fishing area to 12 nautical miles.

The precarious security situation along the border has pushed Israel to attempt to find a solution for Gaza's growing humanitarian crisis.

Since March, thousands of Gaza residents have staged weekly demonstrations at the fence to protest increasingly difficult conditions in the territory. More than 200 Palestinians have been killed, mostly by Israeli sniper fire.

Hamas has thrown its weight behind the protests, but they are also fueled by growing desperation in Gaza, where Israel has imposed tight restrictions on trade and travel for more than a decade. Recent U.S. cuts to aid for Palestinians have been exacerbating woes.

Israel says the protests are a cover for Hamas to break into Israel, while Gaza militants have also taken to floating incendiary kites and balloons across the border, igniting fires.

Netanyahu told reporters in Paris on Sunday that there were limits to cease-fire talks.

"You can't have a political resolution with people who are committed to your destruction," he said.