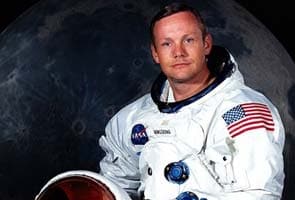 Washington: Historic misquote? Neil Armstrong's famous quote "That's one small step for man, one giant leap for mankind" uttered by the American astronaut after becoming the first person to land on the Moon in 1969 had a small error, according to a new study.

A team of researchers from Michigan State University and Ohio State University has taken a second listen to Armstrong's famous quote and may have provided evidence that he did indeed say the word "a" as part of that famous saying.

When he took his first step on the moon, Armstrong claimed he said, "That's one small step for a man, one giant leap for mankind." However, many listeners think he left out the "a".

As the American astronaut himself pointed out many times, the sentence is meaningful only if he says, "That's one small step for a man."

Armstrong claimed that is what he said on July 20, 1969 as he lowered his foot from the lunar module to the surface of the Moon - otherwise, there is no distinction between a single individual and all of humanity.

But now the researchers have taken a novel approach to deciphering Armstrong's quote by studying how speakers from his native central Ohio pronounce "for" and "for a."

Their results suggest that it is entirely possible that Armstrong said what he claimed, though evidence indicates that people are statistically more likely to hear "for man" instead of "for a man" on the recording.

Armstrong was raised in central Ohio, where there is typically a lot of blending between words such as "for" and "a", according to a Michigan State University (MSU) statement.

"Prior acoustic analyses of Neil Armstrong's recording have established well that if the word 'a' was spoken, it was very short and was fully blended acoustically with the preceding word," said Laura Dilley, an MSU assistant professor of communicative sciences and disorders and part of the research team.

If Armstrong actually did say "a," she said, it sounded something like "frrr(uh)." His blending of the two words, compounded with the poor sound quality of the transmission, has made it difficult for people to corroborate his claim that the "a" is there.

Dilley and her colleagues thought they might be able to figure out what Armstrong said with a statistical analysis of the duration of the "r" sound as spoken by native central Ohioans saying "for" and "for a" in natural conversation.

They used a collection of recordings of conversational speech from 40 people raised in Columbus, Ohio, near Armstrong's native town of Wapakoneta. Within this body of recordings, they found 191 cases of "for a."

They matched each of these to an instance of "for" as said by the same speaker and compared the relative duration.

They also examined the duration of Armstrong's "for (a)" from the lunar transmission.

The researchers found a large overlap between the relative duration of the "r" sound in "for" and "for a" using the Ohio speech data.

Promoted
Listen to the latest songs, only on JioSaavn.com
"We've bolstered Neil Armstrong's side of the story," she said. "We feel we've partially vindicated him. But we'll most likely never know for sure exactly what he said based on the acoustic information."