The British-built fleet replenishment vessel Kharg, which measured more than 200 metres (more than 650 feet) long, caught fire on Tuesday off the port of Jask on the Gulf of Oman, the navy said. 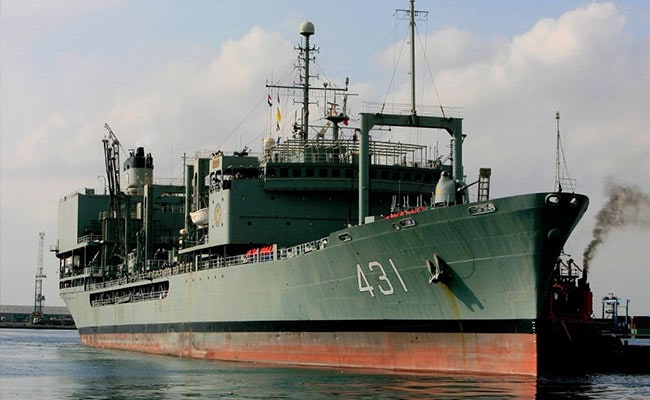 Firefighting efforts continued "for 20 hours" before the "Iranian Kharg" went down (File).

One of Iran's largest naval ships sank Wednesday after catching fire while on a "training mission" off a strategic port near the head of the Gulf, the navy said.

In a separate incident, a huge blaze broke out early Wednesday evening at an oil refinery in southern Tehran. Officials said it was an accident and blamed a leak in a liquefied gas line that triggered an explosion.

Intense flames and plumes of black smoke that had been visible from far across the capital were gradually being brought under control, AFP correspondents said, several hours after the fire broke out.

In the Gulf, the British-built fleet replenishment vessel Kharg, which measured more than 200 metres (more than 650 feet) long, caught fire on Tuesday off the port of Jask on the Gulf of Oman, the navy said.

Footage aired by state television showed a massive column of smoke rising from what it said was the burning vessel.

The fire broke out in "one of the systems" of the ship, a navy statement said without elaborating.

Firefighting efforts continued "for 20 hours" before the ship went down.

"Considering the spread of the fire, the mission to save the Kharg failed and it sank in waters off Jask," the navy said.

The ship caught fire at 11:00 am (0630 GMT) on Tuesday as it was in "domestic waters" during "a training mission", Iran's Tasnim news agency quoted the navy's head of public relations Behzad Jahanian as saying.

All 400 cadets and crew disembarked safely, with 20 sustaining light injuries or burns.

Jahanian said the cause of the fire was "still not clear".

The vessel was ordered from Britain in 1976 when the pro-Western shah was still in power.

It was not delivered until 1984, after years of wrangling between Britain and the government that took power after the Islamic revolution of 1979.

Jeremy Binnie, of open-source defence intelligence provider Janes, said the Kharg was important to Iran as its only dedicated vessel able to resupply warships at sea.

"The Iranians often describe it as a 'helicopter carrier' but it is actually a replenishment ship -- a useful asset nonetheless as it was the Islamic Republic of Iran Navy's only dedicated ship serving this role," Binnie said.

"It is not the IRIN's largest vessel any more after they commissioned Makran, a converted oil tanker, in January," he added.

Iran's ISNA news agency said the vessel had left for a mission focused on "training, intelligence and combat" alongside the destroyer Alborz on May 19.

The port city of Jask, near which the Kharg went down, lies close to the Strait of Hormuz, the strategic chokepoint at the head of the Gulf through which a fifth of world oil output passes.

Jask is strategically important to Iran, as the government plans to make it the site of the country's second-largest oil export terminal.

An approximately 1,000-kilometre (620-mile) pipeline from Bushehr province on the Gulf to Jask was put into service a few days ago, the government said.

It provides a new bypass route for Iranian oil exports that avoids the Strait of Hormuz.

Last year, an Iranian warship was hit by friendly fire during a naval exercise off Jask, killing the 19 sailors onboard.

Logistical support vessel Konarak was hit after "moving a practice target to its destination and not creating enough distance between itself and the target," state television said at the time.

In recent months, there have also been reported attacks on Iran's shipping fleet that have been linked to its arch foe Israel.

In April, Tehran said its freighter Saviz was hit by an "explosion" in the Red Sea, after media reports said Israel had struck the ship.

The New York Times reported at the time that the Saviz had been targeted in an Israeli "retaliatory" attack after "Iran's earlier strikes on Israeli ships".

It came at a time of heightened tensions between the foes, with reports of a series of tit-for-tat attacks on shipping since early March.