InterContinental Hotels Group announced Tuesday it will transition to offering toiletries in bulk-sized dispensers at all its properties by 2021. 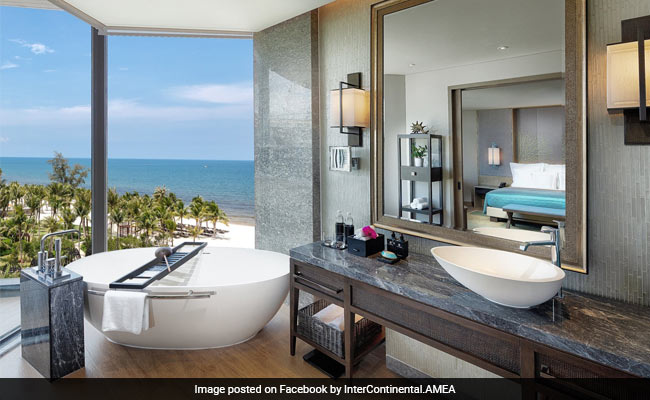 InterContinental Hotels Group is one of the world's largest hotel companies.

One of the world's largest hotel companies is doing away with a tiny perk: miniature versions of shampoo, conditioner and other bathroom products.

InterContinental Hotels Group, with a portfolio that includes more than 5,600 hotels and nearly 843,000 rooms, announced Tuesday it will transition to offering toiletries in bulk-sized dispensers at all its properties by 2021 in an effort to reduce plastic waste. The company expects that to amount to about 200 million little bottles a year.

CEO Keith Barr said the decision followed an announcement last year to remove single-use plastic straws from its hotels by the end of 2019.

"But that's just a baby step," Barr says. "The next biggest thing we saw out there was single-use bathroom amenities."

The U.K.-based company, whose brands include Holiday Inn, Kimpton, Six Senses, InterContinental, Crowne Plaza and Staybridge Suites, has already been operating without mini toiletry bottles at some properties. The luxury Six Senses Hotels Resorts Spas uses refillable ceramic dispensers, and Kimpton Hotels is making the transition as well. Newer brands including Voco, Even and Avid launched with bulk-size amenities, and more than 1,000 Holiday Inn Express hotels have made the change.

Barr said reactions have been overwhelmingly positive from hotel guests at those properties.

"I probably get a complaint now and then from a customer who liked to take them home," he said. "I'm happy to get those complaints because I know we're doing the right thing for the environment."

Chekitan Dev, a professor of marketing and branding at Cornell University's School of Hotel Administration, said he expects some guests will chafe at the change. He said his research shows that 83% of hotel guests expect to use packaged bathroom products, and 86% actually do. When it comes to larger dispensers, 42% expect to use them, and only 24% of them do, he said.

"However, as the 'typical' hotel guest morphs from a boomer to a millennial, concern for the environment is now a top-10 'must have' in a hotel stay," he said in an email. "I expect the change from individual to bulk-sized bathroom amenities will be ultimately welcomed as a brand standard worldwide."

Tuesday's announcement was good news for those who advocate for sustainability practices in the travel industry. Jo Hendrickx, founder and CEO of Travel Without Plastic, said in an email that IHG had previously used the company's guide to help their purchasing process.

"We welcome their commitment today to move to larger size toiletries as part of their efforts to reduce plastic waste," she said in an email. "We think this sets a good example for the industry and hope others follow suit."

Barr said he hopes his competitors see what IHG is doing - and the relatively tight time frame in which it is making the change - and take their own initiative to do the same. He also said he hopes to see more momentum across issues beyond single-use bathroom amenities, including other plastics and disposable items in guest rooms and sustainability in sourcing furniture and fixtures.

"If we do it and everyone in the industry does it, that's a positive impact for the world," he said.

Last year, Marriott International said it expected to replace small toiletry bottles with larger in-shower dispensers at more than 1,500 hotels in North America by the end of the year. The hotel brand said that would keep more than 35 million small plastic bottles a year out of landfills.

Dev, the Cornell professor, said he believes other hotel companies will come around to what he calls one of the industry's "duh innovations." While he expects some initial reluctance to changing typical procedures, he pointed out that larger amenities are already in wide use at hotels in Europe and Asia.

"I expect most hotel brands will follow IHG in making bulk-sized amenities a brand standard," he said.