Inspired by Tunisia, revolt in Yemen 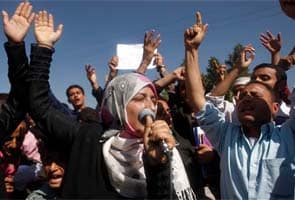 Sanaa: Drawing inspiration from the revolt in Tunisia, Yemeni protesters took to the streets of Sana'a on Sunday to call for an end to President Ali Abdullah Saleh's 32-year rule.

Hundreds of students, activists and opposition groups gathered outside Sanaa university and chanted slogans against the president, comparing him to Tunisia's ousted President Zine El Abidine Ben Ali, whose people were similarly enraged by economic woes and government corruption.

"Get out get out, Ali. Join your friend Ben Ali," the crowds chanted.

Media reports claimed the rally was sparked by the arrest of a local female activist who had led a previous demonstration against the government.

In a reflection of the tight grip Saleh's government and its forces have in the capital - outside the city, that control thins dramatically - Sunday's demonstration was met with heavy security.

AP Television was forced to film the protest in secret for security reasons.

Witnesses at the scene said other media representatives were detained after being caught covering the protests while camera tapes were also seized and there were claims some cameramen were assaulted by police.

The nation's 23 (m) million citizens have many grievances: they are the poorest people in the Arab world, the government is widely seen as corrupt and is reviled for its alliance with the United States in fighting al-Qaida, there are few political freedoms and the country is rapidly running out of water.

Still, calling for the President to step down had been a red line that few dissenters dared to test.

Sunday's protest followed a larger demonstration on Saturday when around 2,500 students, activists and opposition groups gathered at the university.

Police fired tear gas at the demonstrators on Saturday, whose grievances include proposed constitutional changes that would allow the president to rule for a lifetime.

Around 30 protesters were detained, a security official said.

He spoke on condition of anonymity because he was not authorised to speak to the press.

Protests were also held in the southern port city of Aden, where calls for Saleh to step down were heard along with the more familiar slogans for southern secession.

Police fired on demonstrators, injuring four, and detained 22 others in heavy clashes.

Military forces responded harshly to two similar protests a day earlier in four cities in the nearby southern province of Lahj, even firing mortar shells that killed one woman.

The response forced residents to flee.

Since the Tunisian turmoil, Saleh has ordered income taxes slashed in half and has instructed his government to control prices.

He also ordered a heavy deployment of anti-riot police and soldiers to several key areas in the capital and its surroundings to prevent any riots.
Comments
revolt in YemenYemen revolt