They fell from Taft Point, a popular overlook at the park. 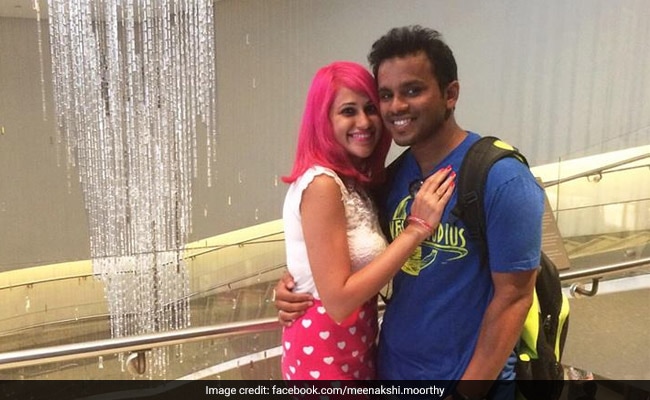 She was a "mermaid-haired wanderess" and self-described "adrenaline-junkie." He was an avid photographer known for his "phantasmagoric" skills and patience. Together, Vishnu Viswanath and Meenakshi "Minaxi" Moorthy were married travel bloggers who regularly shared their adventures and infectious positivity with thousands of Instagram followers.

They frolicked in the dunes of the White Sands National Monument in New Mexico, embraced under cherry blossom trees in full bloom at the Brooklyn Botanic Garden in New York and road-tripped across the country in a red Mustang convertible.

Just last week, the couple's travels took them to Yosemite National Park, a breathtaking landscape of craggy granite cliffs and thundering waterfalls. It would be their final journey.

Viswanath, 29, and Moorthy, 30, were identified by park officials Monday as the two people who died last week after falling from Taft Point, a popular overlook that towers 3,500 feet above Yosemite Valley, the Fresno Bee reported. They fell about 800 feet "in an area with very steep terrain," according to a Thursday news release from the National Park Service that announced the recovery of their bodies. During the recovery process, park rangers had to use "technical climbing and rappelling techniques" and a helicopter, the release said.

"It's clearly a very tragic circumstance and as the investigation progresses we will have a better idea of possibly what happened," park spokesperson Jamie Richards told KFSN, noting that it is "too early to speculate." "We do not know any of the circumstances of what may have happened up there."

Two people who knew the couple, however, believe they may have been trying to take a photo.

The high school sweethearts who wed in 2014 ran a travel blog called "Holidays & HappilyEverAfters" and boasted an Instagram following of more than 17,800 people. Born in India, the pair had resided in New York until recently moving to California where Viswanath - when he wasn't traveling - worked as a software engineer for Cisco Systems in San Jose, the Mercury News reported.

"Diagnosed with the 'curious case of interminable travel bug' and a huge believer of 'happily-ever-afters', we will share with y'all, our holiday escapades, travel hacks, tips (and quips!)," read one post on their blog, which has since been taken down.

Their Instagram account is filled with photos of exotic subjects, including the pristine white sand beaches of the Maldives and Italy's Florence Cathedral. The couple also commemorated their anniversary in dramatic fashion, with a hot-air balloon ride in 2016 and skydiving last year. 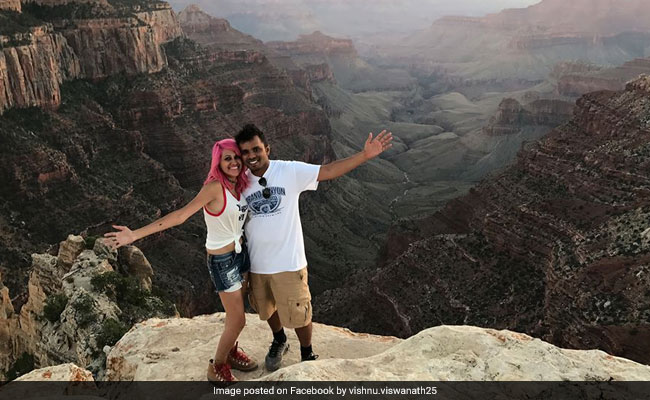 A file photo of Vishnu Viswanath and Meenakshi Moorthy on the edge of a cliff at the Grand Canyon.

"Hurling myself out of a perfectly functioning airplane was a dream forever for this pink-haired daredevil," Moorthy wrote in the caption of the video from the skydiving excursion. Fittingly, she wore a T-shirt with the words "GIMME DANGER."

A number of photos show Moorthy posing near the edge of sharp cliffs, no guardrails in sight. On Facebook, Viswanath's cover photo is a picture of him and his wife at the North Rim of the Grand Canyon standing on a high rock outcropping with their arms extended wide and huge smiles on their faces.

"Living life on the edge," the photo's caption reads.

At Yosemite's Taft Point, their tripod was set up near one of the overlook's ledges, Jishnu Viswanath, Vishnu's brother, told the Associated Press on Tuesday. The pair were talking a selfie when they fell, he said. It was unclear how he knows that. He did not respond to messages from The Washington Post.

A safety railing is installed at the very tip of Taft Point, but there are open areas where a person could walk right up to the edge of the precipice. Sean Matteson, who was at the overlook at the same time as the couple, told the AP he believes he may have taken last pictures of Moorthy, capturing her in the background of his own selfies.

"She was very close to the edge, but it looked like she was enjoying herself," said Matteson, who remembered seeing Moorthy because of her bright pink hair. "She gave me the willies. There aren't any railings. . . . But she seemed comfortable. She didn't seem like she was in distress or anything."

Raj Katta, who has known the pair for three years, told The Washington Post in a phone interview he also thought snapping a photo was "possibly the reason" his friends fell. Katta, a 24-year-old data engineer in New York, met Vishnu Viswanath at Bradley University in Peoria, Illinois, where they were both completing a masters program in computer science.

Katta said he never expected this to happen to Viswanath and Moorthy.

"They're adventurous, but they always were thoughtful," he said. "They know what they're doing, they always had, but one instance changed everything."

Based on their social media posts, Viswanath and Moorthy appeared to be aware of the dangers involved with taking photos at the edges of canyons, mountains or tall buildings. On Instagram, Moorthy warned her followers in at least two posts to be careful when attempting these kinds of pictures.

"Please be careful...," she wrote in November of last year, alongside a photo of her in a Wonder Woman costume at the Grand Canyon. "The wind gusts are extremely dangerous and your adrenaline rage is not worth your life." Moorthy added that she and her husband had "waited quite a bit" and made sure it was safe before taking the picture.

Another photo shared earlier this year, also of Moorthy at the Grand Canyon, was solely dedicated to discussing the "limits of #doitforthegram." 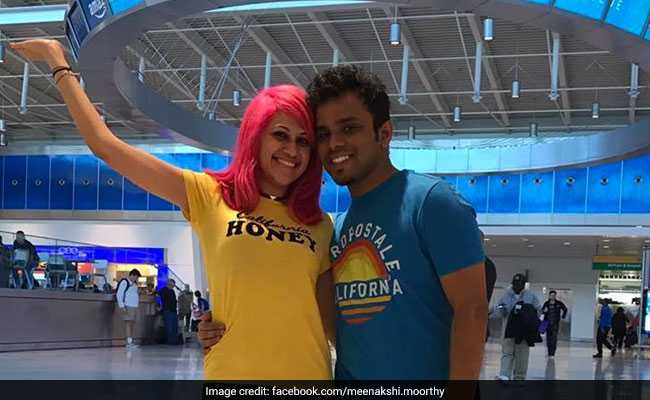 Vishnu Viswanath and Meenakshi Moorthy had been married since 2014

"A lot of us including yours truly is a fan of daredevilry attempts of standing at the edge of cliffs and skyscrapers, but did you know that wind gusts can be FATAL???" Moorthy wrote. "Is our life worth one photo?"

It continued: "When we squirm at another selfie attempt gone south from a skyscraper, let's remember to save that in our core memory..."

More than 250 people have died worldwide in the last six years while taking selfies, according to a recent study from researchers in India published in the Journal of Family Medicine and Primary Care. One of the main causes of the selfie-related deaths included falling from heights, the study found. At Yosemite in September, an Israeli teenager fell to his death while trying to take a selfie at the top of Nevada Falls, which is 600 feet high, the Independent reported.

Richards, the Park Service spokesperson, told the Mercury News that the metal railing at Taft Point was undamaged. Park officials do not plan to install any more railings at the overlook, she said.

"We want all visitors who come to Yosemite National Park to come here, have an adventure, experience the wonder and magic . . . and go home in the same condition that they arrived here," Richards told KFSN. "Any time that does not happen, it is a tragic day."

After learning about the death of his friends, Katta said he was "not able to digest" the news, adding that he even needed to stay home from work.

"I don't know how this happened," he said. "I still can't believe it to be honest."

Katta said that Moorthy, "lively" and always searching for the next adventure, and Viswanath, an organized planner, were "perfect for each other."

"They loved traveling and it was a way of celebrating their love," he said.