All of this allegedly took place inside a bright, gable-roofed house that looks well-kept from the outside as the rest of those on the cul-de-sac. 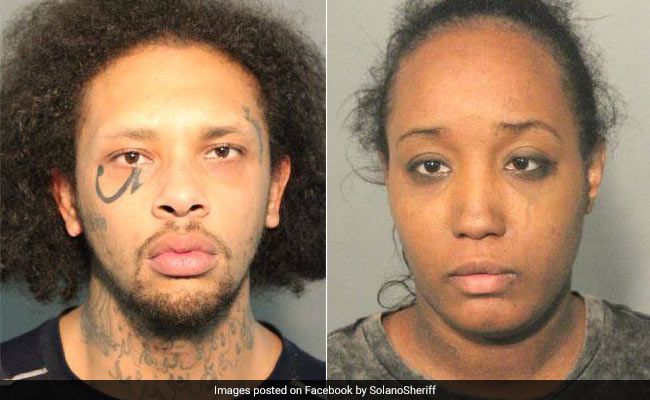 Neighbors of Jonathan Allen, Ina Rogers said they had no idea the couple even had so many children

Ten children have been removed from a home in Fairfield, California, where police say they were tortured, burned, beaten and even shot with a pellet gun while living amid squalor and abuse of all kinds.

All of this allegedly took place inside a bright, gable-roofed, four-bedroom house that looks from the outside as well-kept as the rest of those on the cul-de-sac. Some neighbors of Ina Rogers and Jonathan Allen said they had no idea the couple even had so many children.

And Rogers, out on bail while her husband appeared in court on 15 felony charges Monday, gave reporters an open-house tour of what she insisted was a loving if unconventional home.

"My husband is an amazing person," she said. "I am an amazing mother."

The 30-year-old is the mother of all 10 children - from a 4-month-old infant to her oldest, a 12-year-boy. Allen, a year younger than Rogers, is the father of eight of the children, she said.

Larry Magney, who lives across the street on Fieldstone Court, told the San Francisco Chronicle that the couple moved in about a year ago.

Magney was coming home from church one day at the end of March, he said, and found Rogers "running around the neighborhood" in search of her 12-year-old. Rogers later told reporters that the boy had left home, angry, because she had taken his computer tablet away.

The boy was eventually found sleeping under a bush in a neighbor's yard, police said. What officers saw when they returned him to his home on March 31 caused authorities to seize the children and launch a criminal investigation.

Urine, human and animal feces, garbage and rotten food littered the floor, police said, and heaps of debris blocked off parts of the house.

Pictures obtained by ABC affiliate KGO show furniture, trash, toys and miscellany scattered at every angle, as if a storm had torn through the home. A bathroom was covered from wall-to-wall in animal droppings.

By way of explanation, Rogers told police that she had torn the house apart looking for the 12-year-old, the AP reported. When she was later asked why all 10 children slept in a single room while the other bedrooms were used as the parents' quarters, a "meditation room" and a playroom, Rogers replied that the children liked it that way.

The mother was arrested March 31, the same night her son was returned to her, and booked into Solano County Jail for alleged child neglect.

All her children were then taken into protective custody by Solano County Child Welfare services and placed in the care of other family members, with whom they remain.

In the six weeks since that arrest, police said, authorities have interviewed the eight older children and learned more disturbing details about their lives.

The children had been home-schooled and were seen outside so rarely that some neighbors were shocked to learn more than a few lived at the house.

Some of the children, police said, described incidents of intentional abuse dating to 2014 - puncture wounds, burns, bruising and injuries consistent with being shot with an airsoft or BB gun.

On Friday, Allen was also arrested and charged with nine counts of felony torture and six counts of felony child abuse. He appeared in court Monday, pleaded not guilty, and was ordered held in lieu of about $5 million bail.

"Based upon what the children stated in their interviews, we believe torture occurred in this house," Henry said at a news conference.

But the mother, free on bail since early April, held a sort of news conference of her own Monday.

"My kids get bumped and bruised and scratched because they're kids, but that's it," she told reporters in front of her house, according to the AP. "There's no broken bones, there is no major scars, nothing."

She led reporters through the house, which the AP reported still looked squalid behind the cream-colored, hedge-lined exterior: animal droppings littered the bathroom, and scuff marks still covered some walls.

Rogers said she felt unfairly judged for her lifestyle. She first got pregnant when she was 16, she said, and had been with Rogers for the last 10 years, and they both wanted a large family.

They both worked, she said - she on the graveyard shift as an EKG technician, and Allen as a tattoo artist.

Aleida Quartman, who told the AP that she was one of Rogers' co-workers, said she knew the mother to spoil her family - even if so many children, plus cats, a dog and fish left her house unsightly.

Allen's mother, Peggy Allen, told the AP she had spoken to her son about the importance of housekeeping and Christian values - but that Allen avoided her and kept his relatives away from the children.

"My husband has a lot of tattoos. He looks like a scary individual, and that's why people are so quick to judge him," Rogers told reporters.

On Tuesday, Allen told KCRA-TV from Solano County Jail that he has never spanked his children.

Promoted
Listen to the latest songs, only on JioSaavn.com
On the same day, the Solano County District Attorney's office said it would seek to amend the complaint against Rogers to add nine counts of felony child abuse.