In Iraq's Mosul, University A Casualty Of Anti-ISIS War 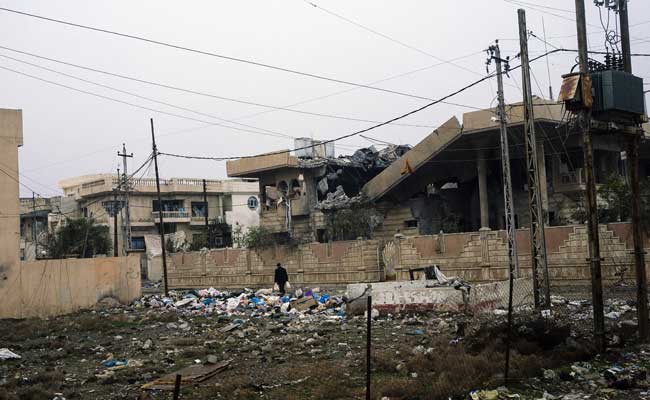 Mosul: Some buildings at the University of Mosul are charred by fires, others rigged with explosives, and bullets still periodically fly past a campus scarred by the battle for the city.

The sound of a jet, the whoosh of a descending missile and the explosion as it hits home mark an air strike nearby that sends a stream of black smoke rising toward the grey clouds blanketing the sky over Mosul.

The university -- like others located in or near cities that were seized by the ISIS in 2014 -- has become a casualty of the war to push the jihadists back.

Iraq's elite Counter-Terrorism Service (CTS) has retaken the university from ISIS, officers said, but the danger posed by the jihadists here is far from over.

There are "booby-trapped buildings in addition to chemical materials inside the university," Captain Saif Ali told AFP on the eastern side of the campus.

The chemicals may have been part of ISIS's rudimentary chemical weapons programme, which it has used to attack Iraqi forces, but which ultimately poses far less danger than the jihadists' bombs or bullets.

"We took control of chemical stores or laboratories that they worked in," Staff Major General Sami al-Aridhi, a CTS commander, said in Mosul.

Around nine barrels of "chemical mixtures" were found at the university, Aridhi said, adding that military engineers had been dispatched to the campus.

Aridhi said that "wireless stations" in a command and control centre were still working when CTS forces arrived.

CTS forces attacked the university from two sides and were able to reach their main objective in five to six hours of fighting, Aridhi said.

ISIS deployed car bombs against them, but they were destroyed, he said.

Some campus buildings seem to have escaped relatively intact, but others are heavily damaged, with streaks of soot over the windows marring the tan exteriors of those that were set on fire.

The rusty tail of what appears to be an aerial bomb is lodged in the rubble inside a burned building with a sign at its entrance that reads: "Mosul Technical College."

Drops of blood make a trail on the stairs inside another building, while long, red-brown streaks show where a body was likely dragged down a hallway.

"Engineers Under Construction," a sign in the building says in English, fallen ceiling tiles scattered on the floor nearby.

On the eastern edge of the university, black-clad CTS members huddle around small wood fires to keep warm, one smoking a water pipe.

The fighting was "from building to building," said Haider, a CTS member who took part in the assault.

With the recapture of the University of Mosul, the battle for the eastern side of the city -- which is split by the Tigris River -- moves a step closer to its conclusion.

A top CTS commander estimated on Saturday that could take around 10 days.

Promoted
Listen to the latest songs, only on JioSaavn.com
But nearly three months after the operation to retake the city began, the fight for the smaller but more densely populated west Mosul is still ahead.