In Atomic Labs Across US, a Race To Stop Iran 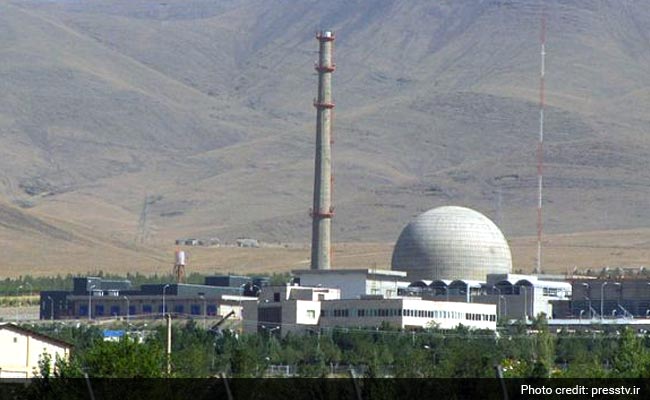 An American proposal for the redesign of the Arak Nuclear Reactor, which has been accpted by Iran, is being seen as one of the few elements of the provisional nuclear deal that looks like a permanent fix.

Washington: When diplomats at the Iran talks in Switzerland pummeled Department of Energy scientists with difficult technical questions - like how to keep Iran's nuclear plants open but ensure that the country was still a year away from building a bomb - the scientists at times turned to a secret replica of Iran's nuclear facilities built deep in the forests of Tennessee.

There inside a gleaming plant at the Oak Ridge nuclear reservation were giant centrifuges - some surrendered more than a decade ago by Libya, others built since - that helped the scientists come up with what they told President Barack Obama were the "best reasonable" estimates of Iran's real-life ability to race for a weapon under different scenarios.

"We know a lot more about Iranian centrifuges than we would otherwise," said a senior nuclear specialist familiar with the forested site and its covert operations.

The classified replica is but one part of an extensive crash program within the nation's nine atomic laboratories - Oak Ridge, Los Alamos and Livermore among them - to block Iran's nuclear progress. As the next round of talks begins Wednesday in Vienna, the secretive effort remains a technological obsession for thousands of lab employees living the Manhattan Project in reverse. Instead of building a bomb, as their predecessors did in a race to end World War II, they are trying to stop one.

Ernest J. Moniz, the nuclear scientist and secretary of energy who oversees the atomic labs, said in an interview that as the Obama administration sought technical solutions at the talks, diplomats would have been stumbling in the dark "if we didn't have this capability nurtured over many decades."

Although Moniz would not discuss the secret plant at Oak Ridge, parts of which date to the U.S. and Israeli program to launch cyberattacks on Iran's Natanz enrichment plant, he said more generally that the atomic labs give the United States "the capacity to carry through" in one of the most complex arms-control efforts in history.

It has also changed the labs. In the bomb-making days, the scientists largely kept to their well-guarded posts. But anyone traveling to the Iran talks over the past year and a half in Vienna and Lausanne, Switzerland, saw the Energy Department experts working hard as the negotiations proceeded and heading out to dinner after long days of talks.

It was over one of those dinners in Vienna last summer that several of the experts began wondering how they might find a face-saving way for Iran to convert its deep-underground enrichment plant at Fordo, a covert site exposed by the United States five years ago, into a research center. That would enable Iran to say the site was still open and the United States could declare it was no longer a threat.

"The question was what kind of experiment you can do deep underground," recalled a participant in the dinner. By the time coffee came around, the kernel of an idea had developed, and it subsequently became a central part of the understanding with Iran that Secretary of State John Kerry and Moniz announced this month. Under the preliminary accord, Fordo would become a research center but not for any element that could potentially be used in nuclear weapons.

Sometimes, during negotiations in Switzerland, a member of the scientific team would dump a bowl of chocolates on the table and rearrange them to show the Iranians how a proposed site rearrangement might work. "It was a visual way," an official said, "to get past the language barrier."

But much of the work was done back at the labs, where specialists who had become accustomed to more 9-to-5 days found themselves on call seven days a week, around the clock, answering questions from negotiators and, at times, backing them up with calculations and computer modeling.

A senior official of the National Nuclear Security Administration, Kevin Veal, who has been along for every negotiating session, would send questions back to the laboratories, hoping to separate good ideas from bad.

"It's what our people love to do," said Thom Mason, the director of Oak Ridge National Laboratory. "It can be very rewarding."

Given the stakes in the sensitive negotiations, the labs would check and recheck one another, making sure the answers held up. The natural rivalries among the labs sometimes worked to the negotiators' advantage: Los Alamos National Laboratory, in the mountains of New Mexico, the birthplace of the bomb, was happy to find flaws in calculations done elsewhere, and vice versa.

"A lot of what we did was behind the scenes," said Charles F. McMillan, the Los Alamos director.

A prime target of the effort was redesigning Iran's still-under-construction nuclear reactor at Arak, a sprawling complex ringed by anti-aircraft guns. The question was how to prevent the reactor from producing weapons-grade plutonium, a main fuel of atomic bombs. Iran insisted the reactor was being built to produce medical isotopes for disease therapy.

Last year, when the Iranians proposed a way to redesign Arak, the job of assessing the plans fell to Argonne National Laboratory in Chicago, one of the world's most experienced developers of nuclear reactors.

The lab refined the Iranian idea, making sure Arak's new fuel core would produce no pure bomb-grade plutonium. Eventually, the Iranians signed on. It is one of the few elements of the provisional nuclear deal between Iran, the United States and five other world powers that looks like a permanent fix because in order to produce weapons fuel, the whole reactor would have to undergo an obvious overhaul.

In lauding the deal announced early this month, Moniz put the redesign of Arak at the top of the achievements list, saying it "shuts down the plutonium pathway."

At other times, scientists were on tight deadlines to come up with solutions.

Late last year, a computer scientist at Lawrence Livermore National Laboratory in California was traveling by train to visit his children when a call came in that his team had to immediately reassess Natanz, Iran's main enrichment plant.

There in a vast underground bunker mazes of centrifuges spin around the clock to purify uranium, another bomb fuel.

The question was whether a proposed design of Natanz that allowed more than 6,000 centrifuges to spin would still accomplish the administration's goal of keeping Iran at least a year away from acquiring enough enriched uranium to make a bomb. The answer was yes.

William H. Goldstein, director of the Livermore lab, said the required turnaround for answers "was hours in some cases."

Fordo, the most troubling of Iran's many nuclear sites, was another major challenge. The enrichment complex there is buried so far under a mountain that Israel fears it could not wipe out the site and its nearly 3,000 centrifuges with airstrikes. The United States has only one bunker-busting weapon that might accomplish the job.
Over the dinner last summer in Vienna, the scientists and U.S. negotiators discussed how to turn the mountain fortress into a peaceful research center.

The answer lay in the deep-underground nature of the site, which made it excellent for an observatory to track invisible rays from cosmic explosions, opening a new window onto the universe. (The rocky strata of the site would filter out extraneous signals.) Another idea was to use the installed centrifuges for purifying rare forms of elements used in medicine rather than for uranium.

In early March, Oak Ridge in Tennessee got a call from the negotiators. They needed to learn more about the idea of purifying elements, to make sure that it was possible and that the equipment left in the mountain could not be easily turned to producing nuclear fuel.

An Oak Ridge team went into action, working Friday night into Saturday. That afternoon, Mason, the Oak Ridge director, was able to send a report to Washington, which was then delivered to Moniz.

In the interview, Moniz said he spoke to his lab directors last week and asked them to think hard about other uses for the Fordo complex, an issue that will be on the table when negotiators resume their talks this week.

Promoted
Listen to the latest songs, only on JioSaavn.com
The world of science, Moniz said, has lots of peaceful projects that would help move the mountainous fortress off the pathway to atomic bombs.

"We're going to be thinking," he said, "about other directions." The question is whether, in the last weeks of the negotiations, the Iranians will go along.
© 2015, The New York Times News Service