This was the first visit to the UK by the wife of Ukrainian President Volodymyr Zelensky since Russia invaded in February. 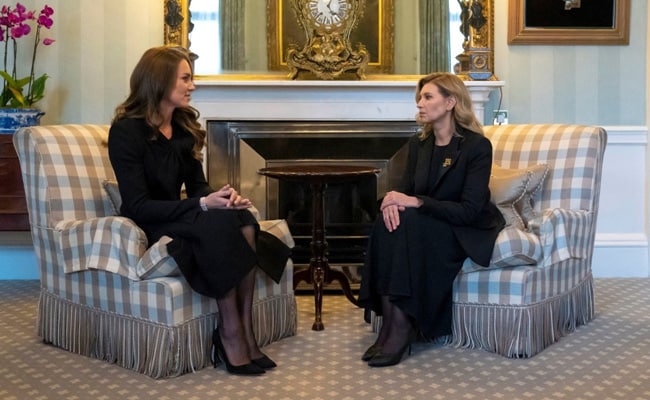 This was the first visit to the UK by the wife of Ukrainian President Volodymyr Zelensky since Russia invaded in February.

Zelenska was pictured looking upset as she passed the coffin at Westminster Hall, dressed in black, accompanied by Ukrainian Prime Minister Denys Shmygal and the country's ambassador to London, Vadym Prystaiko.

She later met Catherine, Princess of Wales, at Buckingham Palace with the women pictured sitting together in checked armchairs.

The UK government opted not to invite Russian President Vladimir Putin or an ambassador to the queen's funeral due to Russia's invasion of Ukraine, prompting anger from Moscow.

While Zelensky does not leave war-torn Ukraine, Zelenska has travelled widely to urge Kyiv's allies to help the country's armed forces with weaponry.

The UK had been training Ukrainian soldiers long before the war and was one of the first nations to provide Ukraine with lethal military aid such as anti-tank missiles in response to Russia's invasion.

This week Zelenska visited the European Union's parliament in Strasbourg, France, and received a standing ovation from lawmakers.

Zelenska also addressed the US Congress in July.

She and her husband made an official visit to the UK in 2020 and met the Duke and Duchess of Cambridge, as William and Kate were then known.

The British royals referred to this when they issued a statement condemning the war in February, saying: "In October 2020 we had the privilege to meet President Zelenskyy and the First Lady to learn of their hope and optimism for Ukraine's future.

Today we stand with the President and all of Ukraine's people as they bravely fight for that future."