I Yelled 'Black Lives Matter!' At A Trump Rally. This Is What Happened Next. 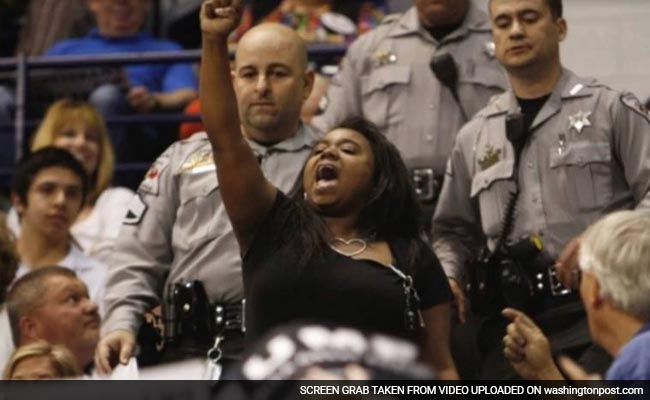 First-time protester Sierra Thomas describes her experience at a Donald Trump rally in North Carolina where a black demonstrator was sucker punched by a white supporter earlier in March.

As I sat in the Crown Coliseum in Fayetteville, N.C., earlier this month, waiting for Donald Trump's rally to start, my adrenaline began to rush. I knew I could be hurt for what I was about to do.

I'd driven three hours by myself that morning from college in southern Virginia to protest his campaign. For months, I'd been reading and watching coverage of Trump's rise. His rallies had become spaces where people felt comfortable being openly racist and hateful, because he allowed them to. And with his ugly rhetoric about Muslims, Mexicans and "the old days" before political correctness, he's encouraged it.

Not long before the Fayetteville event, a group of black students from Valdosta State University in Georgia had been kicked out of a Trump rally at their school, before they had even begun to protest.

Later that week, I saw a video from another one of his rallies, in Louisville, where Shiya Nwanguma, an African-American woman, was pushed around by a crowd of white men. Trump waxed nostalgic, telling the audience: "You know, in the old days - which isn't so long ago - when we were less politically correct, that kind of stuff wouldn't have happened. Today we have to be so nice, so nice, we always have to be so nice."

I knew I had to do something. I couldn't just sit and watch someone who is trying to be our president incite violence. I could not let the progress people have made in learning to love and accept one another go to waste. Trump is playing on the emotions and fears of this country to serve himself. His defenders say his campaign has nothing to do with racism, but what I saw and heard in Fayetteville - and what's happened at other events - prove they're wrong.

If Trump makes it to the Oval Office, I'm afraid of what will happen to this nation. I want to be a teacher after I graduate; what kinds of lessons would children learn from a president who says it's okay to kill the families of alleged terrorists and to ban people from the country because of their religion?

When I watched the video of Nwanguma getting pushed around at the rally in Louisville, I grew increasingly upset, frustrated and appalled. I decided at that very moment that I would protest at the nearest and soonest rally. I went to Trump's website and saw that there would be one in Fayetteville the following week. I ordered a ticket.

I looked all over Facebook for protest groups that would be attending the rally and came across a post by a man named Jonathan Talley, who wrote about needing more protesters. He already had more than 100, though, and since this was my first time protesting, I felt safer knowing I'd have people there backing me up.

I was a little nervous, because my parents didn't want me to go.

They made sure I was well aware of the danger and the consequences I might face. But I was determined not to let fear stop change, and knowing that I'd have people supporting me throughout the whole thing gave me courage.

In my car driving there, I constantly reminded myself of why I was going.

Sierra, don't be afraid. You can do this. No matter what happens, remember why you're here.

This is for Shiya Nwanguma.

This is for my children.

This is for my ancestors.

This is for every black man incarcerated, beaten and killed because of racism.

This is so all Americans - white, black, Asian, Native American, brown, rich, poor - won't have a huge target on our backs because we allowed a bigot to run this country.

The organizers' plan was for demonstrators to go into the event separately and sit by ourselves, so we wouldn't attract attention and could pop up at different times to interrupt Trump. I walked inside and made small talk with the people sitting next to me, even though almost every second sitting there waiting was a challenge.

They were very friendly, up until the moment I started protesting. Throughout the afternoon, I was texting with Talley, and he helped me calm down and stay strong, saying, "Don't let them shake you, and don't be scared."

Shortly after Trump took the stage, the protests began. And the first thing I heard from Trump was: "Go home to Mom!" The crowd ate it up - it seemed like a lot of them were more interested in watching the protests than in hearing his speech.

A few minutes later, I heard a roar, and I received a text from Talley: "You saw that dude punch him right?" A Trump supporter named John McGraw had, authorities later said after video surfaced, just sucker-punched another protester, Rakeem Jones. I heard Trump say: "Isn't this exciting! I love it! I love it!"

He made no attempt to stop the violence but instead egged it on. Then he started that whole "pledge to vote for me" stunt, and I'd had enough. I felt my legs move.

Here we go! Stay focused. Ignore them. Don't be afraid.

It was as if my body was on autopilot. The next thing I knew, I was in the middle of the aisle on the steps, one fist in the air, yelling, "BLACK LIVES MATTER!"

No way MY president is going to register people because of their looks, race or religion.

People began to yell back at me, "All lives matter!" "Get out of here!" "Boo! Trump! Trump! Trump!" I wanted to tell them that of course "all lives matter" but that they weren't dealing with the same struggles black people were - police brutality, an unfair justice system, generational poverty. The fact that our country has ignored our problems for too long. That we wouldn't accept the status quo anymore.

Look them in the eyes. Show no fear. Remember why you're here. Oh - that must be the police touching me.

I turned around, all the while yelling, "BLACK LIVES MATTER!" I couldn't stop saying it.

Trump looked my way and yelled into the mic: "Get out!" The people I'd been sitting and talking with cheered with the rest of the crowd as police came over.

Three officers grabbed me, and I heard cheering from all around. Maybe in other circumstances, I might have been afraid. But right then, I wasn't. I didn't have time to worry, and I most certainly couldn't show it. I blocked everything out and kept chanting.

Once we got to the top of the steps to exit my section, two
officers trailed off and one continued to walk me to the door. He would eventually let me go, without any arrest, to the parking lot to meet the rest of the protesters and keep demonstrating outside the rally.

On the way out, he pushed me pretty hard and tried several times to pull my fist from the air.

"Get your hands off of me, and stop pushing me right now. BLACK LIVES MATTER!"

"Well, you need to keep walking."

"I have not resisted since the moment you grabbed me. BLACK LIVES MATTER!"

I raised my fist back in the air. "BLACK LIVES MATTER!"

A middle-aged white man in the crowd yelled at me: "Get your little ass out of here! Go home, nigger!"

Don't stop now, you're almost at the door! Let them hear you! Don't give up!