"I Worry It May Trigger Violence": Rohingya Face Backlash In Bangladesh

Much has changed in the time since he and 750,000 other members of the stateless Muslim minority escaped neighbouring Myanmar. 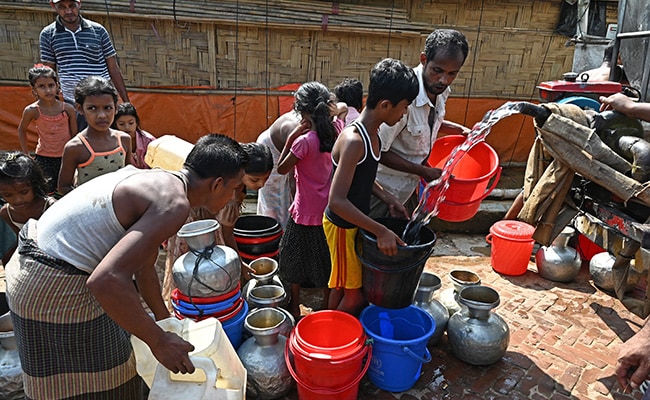 Rohingya refugee Noor Kamal found a sympathetic welcome in Bangladesh when he fled the soldiers rampaging through his village -- but five years later, the hostility he now faces has left him pondering a dangerous return home.

Much has changed in the time since he and 750,000 other members of the stateless Muslim minority escaped neighbouring Myanmar, the survivors of a horrific crackdown now subject to a UN genocide probe.

Back then, thousands of Bangladeshis, outraged by the anti-Muslim violence across the border, trekked from across the country to distribute food and medicine to the shell-shocked arrivals.

But public attitudes have hardened after years of fruitless efforts to negotiate a safe return for the Rohingya, with media outlets and politicians regularly condemning refugees as drug runners and terror threats.

"There is so much hatred among local people and the press here that I worry it may trigger violence at any time," Kamal told AFP from his home in Bangladesh's sprawling border relief camps.

"It's better we return home even if it means we have to face bullets. If we die, at least we will be buried in our motherland."

Bangladesh has struggled to support the immense refugee population -- while there is financial assistance from the UN refugees body and other humanitarian organisations, Dhaka still faces huge administrative challenges in hosting the camps.

Last year's military coup in Myanmar has made the prospects of a wholesale return even more remote.

Last month, Prime Minister Sheikh Hasina said the Rohingya camps had become both a deep burden on her country's economy and a threat to its political stability.

"If the problem persists... it may affect the security and stability of the entire region," she told the UN General Assembly in New York.

Resentment is widespread among Bangladeshis living near the camps, who say the Rohingya have outstayed their welcome.

"They are bringing shame to Bangladesh," Ayasur Rahman, the spokesman of a local civil society group campaigning against the Rohingya's presence, told AFP.

"They should be sent to Myanmar immediately," he said, accusing refugees of "snatching our jobs (and) stealing our passports".

Critical commentary on security issues in the camps and their burden on public resources has also become a running feature of local media reportage.

In August, on the fifth anniversary of the crackdown that sparked the Rohingya exodus from Myanmar, a popular online news portal ran an opinion article asking: "How long will Bangladesh be punished for its benevolence?"

Another local media headline likened the presence of the Rohingya to a "cancerous tumour".

Negative media portrayals of the Rohingya have become so rampant that they caught the attention of former UN rights chief Michelle Bachelet, who toured the country in August as one of her final acts in office.

"I am very worried about increasing anti-Rohingya rhetoric in Bangladesh, stereotyping and scapegoating Rohingya as the source of crime and other problems," she said at the time.

'It is very hurtful'

Refugees acknowledge that violence and criminal activity exist within the Kutupalong camp network -- though it is the Rohingya themselves who are its chief victims.

The Arakan Rohingya Salvation Army (ARSA), an Islamist militant group that has clashed with Myanmar's army in the past, has sought to entrench its control over the camps -- even murdering civil society leaders that could challenge its authority.

Southern Bangladesh is also a hotspot for the regional methamphetamine trade originating in Myanmar, and Rohingya are often recruited as drug couriers for the influential local kingpins who control distribution networks.

The trade predates the 2017 Rohingya influx, but refugees say they have been largely blamed for the spread of drugs in Bangladesh, and condemned as criminals regardless of their involvement.

"Out of a million people, there are a handful of bad apples, but that doesn't justify calling the entire refugee community criminal," Rohingya refugee Abdul Mannan told AFP.

"It is very hurtful how we are being portrayed."

This year, a stuttering economy has saddled Bangladeshis with rising food prices and lengthy nationwide blackouts that have occasionally sparked violent protests.

Bangladesh also suffered its worst flooding in living memory during the latest monsoon, with millions of homes inundated and numerous villages cut off from the rest of the country.

The resulting hardships have helped erode the charitable sentiment that once compelled Bangladeshis to flock to the camps and offer help to refugees.

"The compassion that was demonstrated in 2017 and subsequent years has dwindled. It has been replaced with xenophobic rhetoric," said Ali Riaz, a professor of political science at Illinois State University who has written extensively on the Rohingya crisis.

"Fear and hatred are the key features," he told AFP. "Unfortunately, these are not in short supply."