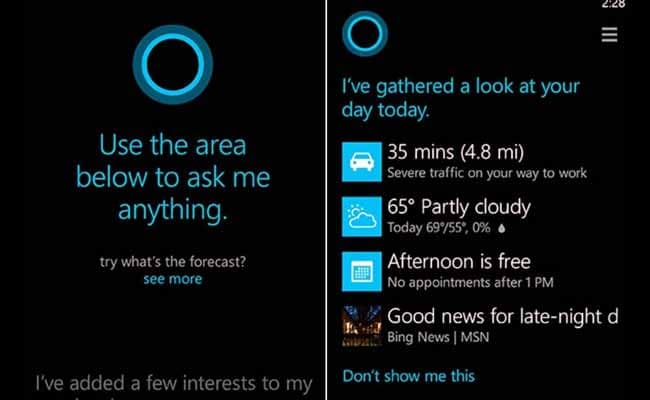 Microsoft's Cortana, which is built into Windows 10, is similar to Siri. You can ask her for answers to basic questions, get traffic updates and manage your calendar.

There comes a point in every adult's life when one stops and thinks: I could really use a personal assistant. I know I could. The Washington Post's budget, however, doesn't stretch to provide each reporter with a personal aide. But thanks to the magic of technology, I have regular access to five digital assistants: Siri, Cortana, Alexa, Google Now and an email-based scheduling assistant called Amy.

It should be a breeze for anyone trying to get themselves organized as part of a New Year's resolution. It should be fantastic. But, if I'm perfectly frank, I'm really no closer to getting anything done.

The idea of an assistant is appealing but hard to implement, said Dennis Mortensen, chief executive of x.ai, a company that makes an artificial intelligence assistant that you can copy on your emails to set up appointments. The most popular assistants out there, Mortensen said, are really "enablers" rather than programs that help you. They give you information so you can do things, but don't actually do much for you.

Not only did I find that out, but I also noticed in the process that you're giving up a lot of information. These things need to know your schedules, your habits, your favorite contacts and more to work well. That's about as much, in fact, as you'd have to give to an actual personal assistant - something that may make many uncomfortable.

Digital assistants are relatively new technology, and not all digital assistants have been created equal. There's Siri, for instance. Apple's digital assistant is generally good at understanding what you're saying, operating your iPhone and taking care of some basic communication functions. Need to send a text? Siri's your gal. (Or guy, as Siri is on my phone.) Ditto for short emails, finding quick sports scores and setting short appointments. Microsoft's Cortana, which is built into Windows 10, is similar to Siri. You can ask her for answers to basic questions, get traffic updates and manage your calendar. Both are also skilled, if that's the word, at telling corny jokes. Their greatest utility lies in basic communication and information gathering.

Google Now also provides a similar service, though without the constructed personality. Google Now also has the advantage of being plugged into, well, the powerhouse of knowledge that is Google. It gets better if you plug in your own email account, but even without that level of information sharing, Google Now can pull up really good search results, and can identify songs, which I think is a neat trick.

Slightly off that path is Alexa, Amazon's assistant, which is housed in its Echo speaker. She's more like a personal assistant for your home rather than for the rest of your life, able to set timers and provide you with news updates. (Amazon chief executive Jeffrey P. Bezos is also the owner of The Washington Post.) She won't, however, be able to provide you with coffee shops or do much in the way of meaningful search. In fact, she's not mobile at all.

That limits the use cases. I find I use Alexa most when I'm cooking or sitting at the kitchen counter paying bills. Those are the times when I'll want the news and sports updates she can offer. So basically, Alexa is good for passive help rather than active help. (Alexa, by the way, will also tell you punny jokes.) I have to say that, in testing, Alexa's always-on listening has led to the most interesting outcomes. She sometimes hears her name when it hasn't been said, which can be unnerving.

Alexa and Siri can also be set up to work with smart home appliances, which paves the way for both systems to be more like the Star Trek computer we've been dreaming about for decades. But not quite yet.

All of this is nice enough. But it's very rare that any of this saves me any time. When I send messages, for example, I'm constantly having to correct some part of it. In about 90 percent of cases, I was better off typing my own messages or searches.

Assistants are designed to get better over time, but that means that you keep training them after you set them up, which is asking a lot of users. Part of this is my fault. I have tech commitment issues. I use a Mac and a PC, have both an iPhone and Galaxy S6, and split my email between Microsoft for work and Google for personal matters. But even if I could commit to a tech universe, I'd still have to hop back and forth between assistants to get everything that I wanted.

Alexa will only tell me what's on my Google calendar, for example. So if I use Siri to set up an appointment on Apple's Calendar, it won't flow over automatically. I've done a lot to hook up various accounts so that I get actual meaning out of my interactions with these assistants. But I'm hardly a normal person when it comes to enthusiasm and patience with technology.

Which is what makes the assistant from x.ai so interesting. All it does is schedule things: you copy it on emails where you're trying to set up meetings, and it sends reasonably cheerful emails to your other participants to find a mutually agreeable time. Mortensen sees his own company's assistant, Amy Ingram (AI, get it?), as a vertical agent: she takes care of one task well, rather than trying to be an all-in-one.

She had her set-up woes as well. Amy also works just with Google calendars for now, though broader support is planned by the time the product launches this year. Once I got Amy up and running, I did have a glimpse of a more efficient future: the first time I felt like I was actually delegating to another person. I sent an initial email, Amy did all the follow-up, and all I had to do was show up for a call. Interacting with her may have been strange for others - Mortensen even uses Amy to schedule things with his wife, though admits that may not work for everyone - but it saved me a lot of the "just checking in" emails that I'm accustomed to typing while grinding my teeth.

Mortensen thinks that, eventually, agents and assistants will end up like apps: You'll pick the ones you want from a marketplace with lots of specialized assistants. So if you need help with analyzing data, you'll find an agent that can help you look for trends. If you want to make restaurant reservations, you can give your "assistant" some times and places and trust that things will be set up for you.
After managing all of my assistants for a few months, I'm inclined to agree that the most promising ones are those that can actually do something for you. At the very least, I'd like to at least be able to say these assistants save you enough time to pay you back for what you do setting them up. I can't say that yet, for any of the assistants I tested. So until those are more widespread, I'm going to stick to my trusty paper planner and my own 10 fingers - or two thumbs, as the case may be.