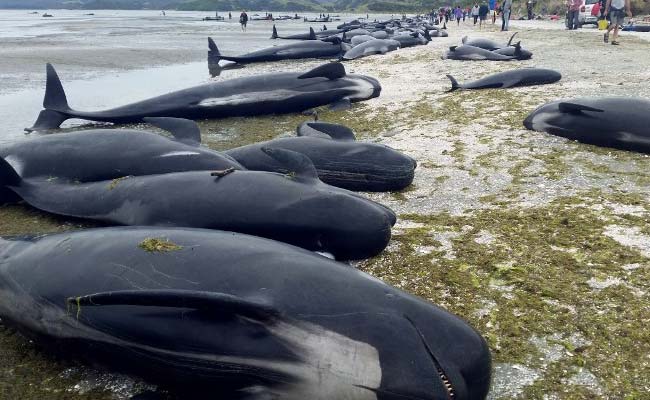 Wellington, New Zealand: More than 400 whales were stranded on a New Zealand beach Friday, with most of them dying quickly as frustrated volunteers desperately raced to save the survivors.

It was one of the largest mass beachings recorded in New Zealand, where strandings are relatively common, the Department of Conservation said.

About 70 percent had perished by the time wildlife officers reached the remote location and about 500 volunteers pitched in to get the remaining whales offshore.

However, he conceded the outlook was gloomy and by late afternoon the majority of the 100-plus whales that were re-floated at high tide had swam back ashore.

"With that number dead, you have to assume that the rest are in reasonably poor nick as well," he told Radio New Zealand.

"So we're sort of preparing ourselves for a pretty traumatic period ahead." 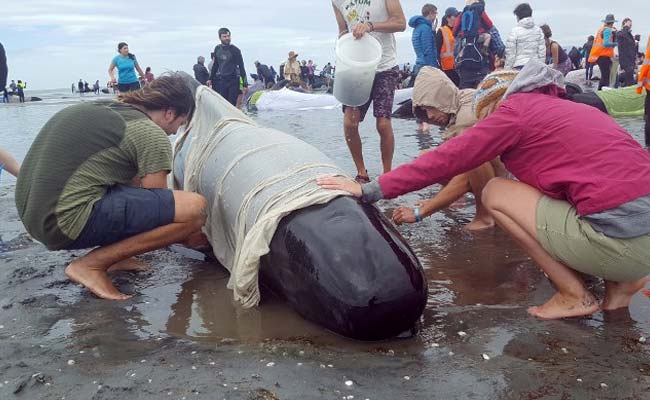 People tending to pilot whales, which beached themselves overnight, at Farewell Spit.

Department spokesman Herb Christophers said there were so many whale carcasses that it was difficult for the volunteers to get living animals into the water.

"The dead ones that are floating around out there are obstructing their course out to sea," he told AFP.

"I understand they're concerned about people's welfare... there's quite a safety issue there."

The volunteers at the beach were also advised to be wary of the thrashing tails and fins of the distressed whales, which can weigh up to two tonnes.

Pilot whales grow up to six metres (20 feet) long and are the most common species of whale in New Zealand waters.

They are renowned for tragically swimming back ashore after being refloated in an apparent attempt to rejoin their pod.

Volunteers will again attempt to refloat any survivors on Saturday.

In the past, whales that repeatedly re-strand have been euthanised after becoming steadily weaker with every attempt to return them to the sea. 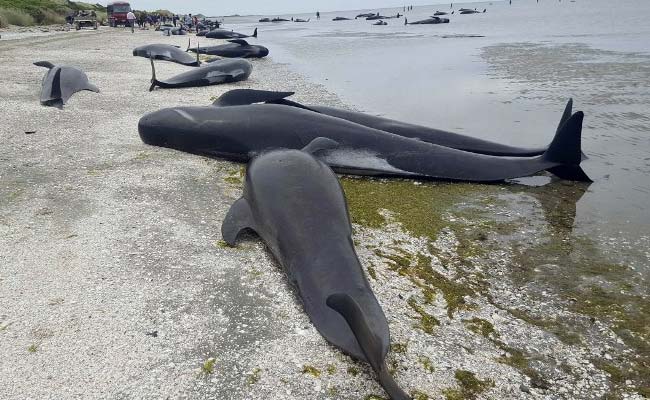 Christophers said whale carcasses were sometimes tethered in the shallows so sea creatures could feed on them but such a solution might not work for Golden Bay, a popular tourist area.

He said they would probably "dig a bloody big hole" and bury the carcasses.

The biggest occurred when 1,000 whales beached at the remote Chatham Islands in 1918, followed by 450 that washed ashore in Auckland in 1985.

Farewell Spit, about 150 kilometres (95 miles) west of the tourist town of Nelson, has witnessed at least nine mass strandings of the species in the past decade, although the latest is by far the largest.

Lamason said the reason the whales beached themselves was unknown but he believed it was partly due to the local geography.

Promoted
Listen to the latest songs, only on JioSaavn.com
"If you designed something to catch whales then Golden Bay is probably the perfect design," he said.

"Out at Farewell Spit it's a big massive sweeping hook of sand coming about, the bay is very shallow and once the whales get in there... it's very difficult to work out which way is out."
Comments
New ZealandWhales on beachDead whalesBeachingNew Zealand beaching