Drink Until You Pass Out: A Look Into Brett Kavanaugh's High School Life

Brett Kavanaugh's nomination has opened the door to a shocking world of the children of Washington's wealthiest, who pay as much as $50,000 a year to study in exclusive schools. 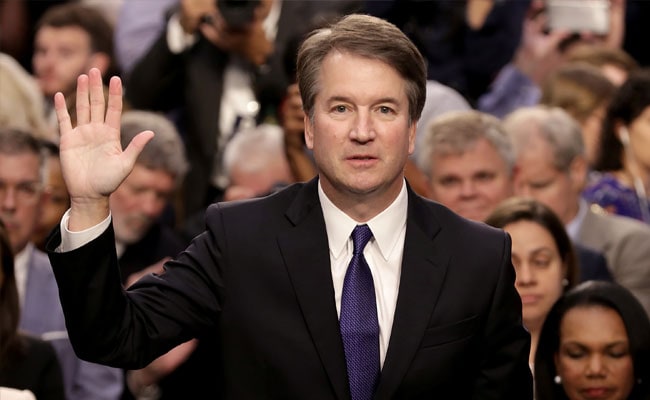 The school sits on a sprawling campus with manicured lawns, multiple sports fields and indoor tennis courts, a virtual country club that promises students with deep-pocketed parents top-level educations and a path to Ivy League universities like Harvard and Yale.

But when Supreme Court nominee Brett Kavanaugh attended the exclusive Jesuit-run all-boys Georgetown Preparatory School in the early 1980s, students joined something different: an elite party network of weekend bacchanalia and trips to the beach where teenage boys and girls drank and drugged themselves into stupors.

Kavanaugh's nomination has opened the door to a shocking world of the children of Washington's wealthiest, who pay as much as $50,000 a year to exclusive schools which offer gilt-edged educations and entries into elite circles.

"All of these Catholic schools were wild," said one woman who attended an exclusive Washington school for girls and whose brother attended Prep.

"They have a wonderful reputation for education, and they also have a lot of bad boys. If it wasn't drinking, it was gambling," she said.

Kavanaugh has denied accusations that he sexually assaulted or abused women in some of those parties.

But student yearbooks from Prep and other schools, including Holton-Arms academy, where one of his accusers went, testify to the rowdy party culture they lived at the time.

The teens of the time clearly had money to burn and their own cars to get to weekly parties students held in massive suburban Washington homes, usually when parents were out of town.

The Holton-Arms yearbooks note that invitations to Georgetown Prep parties were highly coveted, where the things of importance were "boys and beers" and the main activity all-night drinking games.

"Striving to extend our educational experience beyond the confines of the classroom, we played such intellectually stimulating games as Quarters, Mexican Dice, and everyone's favorite, Pass-Out, which usually resulted from the aforementioned two," one student Holton-Arms student wrote.

In his yearbook, Kavanaugh described himself as "treasurer" of the "Keg City Club," adding "100 kegs or bust" -- a reference to a pledge by a group of classmates to drink 100 kegs of beer before they graduate.

Kavanaugh's close friend Mark Judge later wrote a book about the roots of his alcoholism at Georgetown Prep: "Wasted: Tales of a Gen X Drunk."

After the first beer, he recalled of an early party, "I found it impossible to stop until I was completely annihilated."

He also referred to his pseudonymous friend "Bart O'Kavanaugh" vomiting and passing out in a car after one late-night party.

Until his nomination, Kavanaugh's life at Georgetown Prep was something he would joke about.

But the stories have hit a raw nerve at the 229-year-old school. While it advertises its dedication to a well-rounded education underpinned by morality and humility, its verdant 38 hectare campus in the expensive Bethesda, Maryland suburb speaks mainly of wealth and comfort.

Students have their own golf course, multiple ball-sports fields, indoor and outdoor tennis courts and an Olympic-sized pool.

A Washington woman who sent her son to the school acknowledged the reputation but said Prep does deliver a top-notch education.

"It is expensive. But it was worth the opportunity to get that experience," she said.

Prep does send marginally more graduates to top universities like Harvard and Stanford compared to public schools. Alumni include congressmen and senators, members of the Kennedy family, a governor of the Federal Reserve, a former NATO supreme commander, and the last judge to be named to the Supreme Court, Neil Gorsuch.

But the partying may have toned down since the 1980s. For one, the drinking age has risen from 18 years old to 21, setting a higher hurdle for teens in search of alcohol.

Secondly, unlike in the 1980s, parents can now be held legally accountable if an underage drinker in their charge or in their home is injured or injures someone else.

"Yes, there are parties. There is drinking, and some drugs," said a 2008 Prep graduate now in advertising technology.

"But not everyone participates in these activities, and there is not an undue pressure to participate in anything illegal or rowdy."

And parents and students in the region say there's no real difference today between public and private schools, partying-wise.

"The only difference might be that Prep indiscretions took place in pool houses rather than basements," said the former student.

(Except for the headline, this story has not been edited by NDTV staff and is published from a syndicated feed.)
Comments
Brett KavanaughBrett Kavanaugh sexual assault